Doña Letizia returns to release a dress on Columbus Day 2021 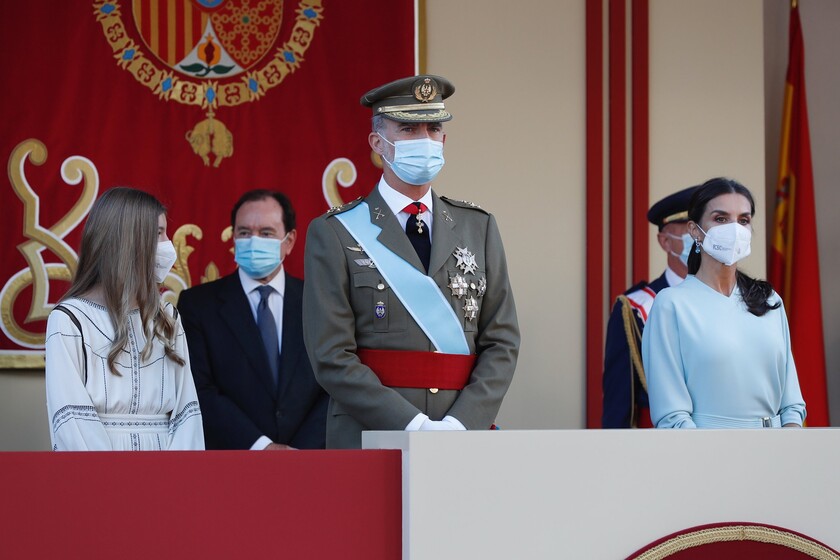 Don Felipe and Mrs. Letizia, accompanied by their daughter the Infanta Sofía (Princess Leonor is in Wales studying, she is scheduled to return to Spain at the end of the month for the Princess of Asturias Awards) they have presided for the eighth year as Kings of Spain the military parade on October 12 in Madrid.

An act solemn tribute to the National Flag and the subsequent military parade that this year is held in the Plaza de Lima. Later, the Kings will offer the traditional commemorative reception of the National Holiday Day at the Royal Palace of Madrid.

As usual, all eyes have been directed to the style of the queen, which always impacts on this day. Given the circumstances last year it did not premiere look, but this 2021 he has chosen to release a new model.

The queen has opted for a dress midi crossed in pastel blue. A model with long puffed sleeves, a crossover neckline and a draped skirt with a wide belt to the tone and a silver buckle that marks the waist. A very simple and elegant design that has been combined with salons and matching gray leather wallet from Magrit.

Long hair collected in a simple ponytail, white gold, diamond and aquamarine earrings. Bvlgari and his inseparable golden ring of Karen hallam have completed their outfit for this October 12, 2021.

Infanta Sofía, who on this occasion has attended without her sister, has also been one of the protagonists of the day. The Infanta has chosen for this day a boho look with a black and white long-sleeved dress with a ruffle detail on the skirt of Claudie Pierlot. Its price is 285 euros.

A model that has combined flat sandals with laces tied to the ankle of CH Carolina Herrera and loose wavy hair.