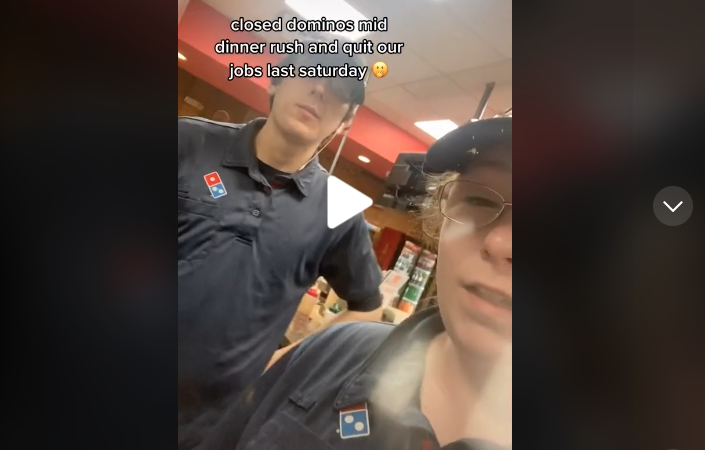 Through TikTok, a Domino’s Pizza employee shared the reasons for her resignation just when there were more customers in the pizzeria.

The last few days have not been entirely good for TikTok, after it was discovered, through a report published in The Washington Post, that there was a campaign against it initiated and provoked by Facebook, the powerful social network of Mark Zuckerberg.

According to what can be read in said report, the social network owned by Meta hired the American consulting company, Targeted Victory, in order to damage the reputation of TikTok.

According to what was published, which has been replicated in some media, for Facebook, “TikTok is the real threat because it is a foreign social network that is number one in sharing data used by adolescents”.

Despite this, and even when Facebook is currently the social network with the largest number of users (almost three billion Internet users)TikTok continues to rise, adding more and more registered users.

And it is that, since the arrival of the pandemic, the Chinese social network became the ideal platform for Generation Zbut it also managed to position itself as one of the most viral networks in recent years.

Proof of this is the case that was made known where a Domino’s Pizza employee announced her resignation at the time when there were more customers in the pizzeria.

The reasons? According to what she expresses on her social network, she was already “tired” of the mistreatment by her boss, as well as the poor working conditions to which she was subjected. It was so, in the middle of rush hour at the pizza chain, she recorded a TikTok where she gave some details of her complaint.

In a first video, the young American, who calls herself on the ByteDance platform @mikaylaprindevillmentioned “This is the end, the last moments”. Some time later, in other recordings in which she is accompanied by one of her colleagues, she shared more details about what it was like for her to work at Domino’s Pizza.

“Our delivery area stretches across six cities. So unless the orders are from nearby places and the delivery guy can deliver two or three pizzas in one trip, there is no chance of being on time. The driver can be on the road for up to an hour per trip,” he recounted.

In addition, as part of the story she told on her TikTok account, the young woman announced that, at various times, she found mice in her work area.

“Our management calls the exterminators once every two months, but when they bring out the glue traps and catch the mice, we’re the ones who have to deal with it,” he said.

As a whole, their videos have exceeded six million views, also having great interaction with various Internet users, some of whom have even shared their experiences in their respective jobs.