Doggerland, Europe once inhabited and today submerged in the waters of the North Sea 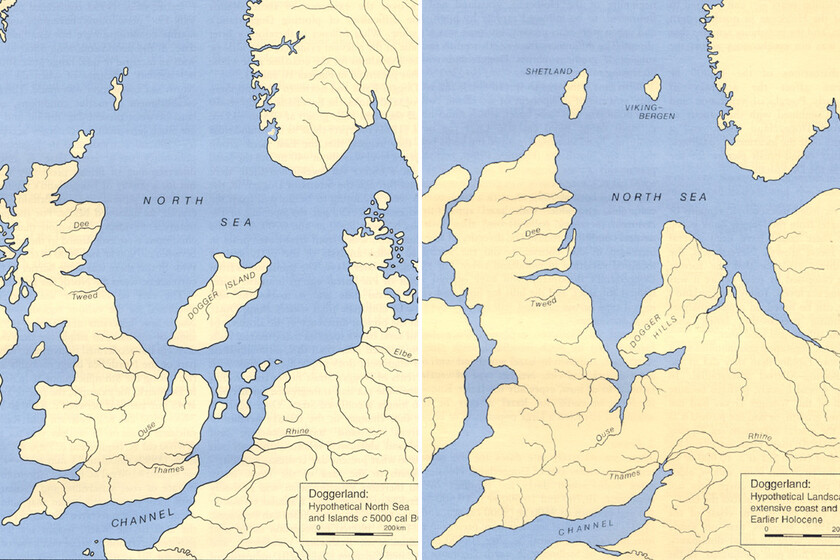 An earlier version of this article was published in 2017.

The extreme slowness of the processes geological has led us to believe that the Earth is stable. What is is. That the shape of its continents, shaped over the millennia by the hands of wind, water and ice, is perennial. That if we travel two hundred years forward, the world will be what it is today. The mountains will continue where we left them. And we would be right.

This is also true, yes: we have assumed in advance that Earth once was not like this. That at one point the continents were stuck together. However, we look at the geological past of the Earth like someone observing a fantastic story: events unrelated to our lives as humans. But the geological and geographical movements of our planet have, at times, been so drastic and dizzying that they have affected human settlers.

And the best example of this is Doggerland.

Around 6,000 BC, humans had already discovered agriculture and livestock, and in the Middle East and other milder latitudes civilizations would begin to flourish, with their overflowing cities, a few millennia later. In Europe, however, the footprint of glaciations and extreme climatic conditions had limited the social, technological and economic development of its few inhabitants, many still hunters-collectors.

A part of these proto-Europeans lived in what we now call the North Sea. They spread out across the calm and relatively fertile plains of a land called Doggerland, permanently submerged when the end of the last ice age would fatally raise the water level. That land connected the British Isles with present-day Jutland, with present-day Netherlands and, in short, with continental Europe. A bridge that, had it survived, would have changed the history of the continent forever.

From left to right, the process of disappearance of Doggerland from the last death throes of the glaciation to the present day. (Wikipedia)

The Doggerland clues became certainties when the first geological investigations of the 19th century revealed the existence of glacial periods. The last one ended roughly 18,000 years ago, but the great ice sheets that froze part of the Northern Hemisphere did not evaporate overnight. In this context, and during the Mesolithic In Europe, a period of intense demographic and cultural change prior to the Neolithic Revolution, the Europeans of yesteryear inhabited Doggerland.

It is believed that the ice retained by glaciation would have lowered the sea level by about 120 meters, releasing large patches of land all over the planet, but especially in the lowlands of northern Europe. The phenomenon occurred in other latitudes in the same way and before: the portions of land refloated in the now Bering Strait facilitated human colonization of America, as well as other lowlands facilitated access to today isolated lands such as Japan and Australia.

Index hide
1 Doggerland: a lesson for the future
2 Magnet Newsletter

Doggerland: a lesson for the future

Great Britain, at that time and thanks to Doggerland, was connected to Europe, which facilitated a certain exchange cultural and demographic shortly before its isolation. It is likely that what we know today as the Thames or the Seine, both short rivers that flow into the North Sea or the English Channel, converged in a large estuary with the Rhine, extending beyond its mouth in the Netherlands. . The great river system would die the waters of the Atlantic through an arm of the sea that, later, would become the Canal.

Read:  The Police determine that the detainee is the sole perpetrator of the crime in the Madrid bar

Doggerbank, the sandbar submerged in the North Sea that, if the sea level fell, would emerge as an island. Doggerland took up an even larger space. (Wikipedia)

That land would resemble, in terms of landscape, fauna and flora, both those of northern Europe and Great Britain: great access to water sources in the form of rivers, lakes and ponds; a rough coastline exposed to the ocean currents of the Atlantic; and a relatively flat terrain dotted with hills. An optimal space in which to develop, later, a civilization, albeit much colder. Not surprisingly, it was the rise in temperatures that brought the fatal fate of Doggerland.

What happened to make Doggerland pass away? The process was gradual: the progressive floods, caused by the thaw, pushed many of its inhabitants to other parts of Europe (be it the islands or the plains of northern Europe). The disappearance The gradual movement of the great northern ice blocks was joined by various landslides that, like the one at Storegga, of gigantic proportions, caused giant waves and tsunamis that engulfed Doggerland.

An approximate map of what today would be Doggerland in the whole of Northern Europe.

The disappearance of Doggerland caused major changes, as explained here, in the pre-Neolithic European landscape. Had it survived, an interesting counterfactual, it is likely that the genetic diversity of northern Europe would have been greater. The land, flat, fertile and suitable for agriculture, could have supported a small civilization whose language and culture would have had an important influence on the rest of the continent. Instead, the inhabitants of Doggerland mixed and assimilated to the populations further south, safe from flooding.

Of Doggerland we know exact maps thanks to geological explorations carried out both by researchers (using 21st century technologies) and by companies interested in exploiting the oil wells of the North Sea. The computation of knowledge and the very varied evidence archaeological available has allowed making maps as complete as this one from National Geographic, which reveals the superb extension of the flooded and previously inhabited land.

A 1796 map by Thomas Foot illustrating the well-known sandbars of the North Sea, shallow by the grace of Doggerland. They were the first clues that led to the later discovery of submerged Europe. (Wikipedia)

Well, what interest does Doggerland have for us? Beyond pure knowledge, a little lesson. Those lands were consumed by the waters of the Atlantic when the temperatures were up, causing a massive migration and the loss of human communities that, still primitive, were doomed to the well of history. The growth of the sea, in very low territories, has consequences that are so devastating, so drastic. It was a landscape change similar to the one we face today.

Similarly, the soaring temperatures in recent years have made the prospects for a drastic rise in sea level real. Climate change could give us back our particular Doggerland: one in which much of North America, southern India or northern Europe would be flooded, the former lands adjacent to Doggerland. Fertile plains accessible to sea waters in case of significant growth.

Cities, communities and places that would be condemned as Doggerland was once, a mere object of memorabilia geek on an admirable Reddit forum.