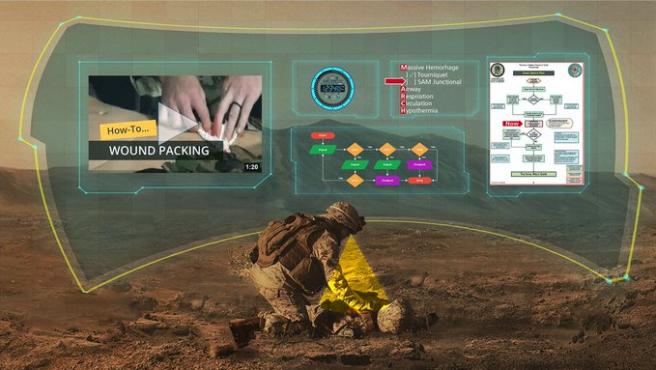 US military doctors could soon be equipped with augmented reality goggles. This would allow them to watch in-the-field videos of procedures they rarely practice and have real-time, step-by-step guidance.

Combat medics are essential within from army. They are the first to intervene on the ground to save the lives of wounded soldiers. They must act quickly to increase their patients’ chances of survival. Despite extensive training, they do not have the experience of specialist doctors and often do not have the time to search for information about an urgent procedure.

The Magic system will integrate a database of 50 different procedures, with 2,500 stereoscopic videos and nearly 50 million images. The glasses will also integrate two cameras associated with one artificial intelligenceable to analyze the actions of the doctor and check that he is following the steps correctly. The AI ​​will also provide crucial information such as the elapsed time or the dose recommended.

The glasses can be controlled by voice and will offer automatic assistance thanks to AI. The doctor can choose between information display or one voice guide to avoid saturating your Visual field. However, the Magic system will not be available in the field for a few years. Raytheon Technologies plans to hold its first demonstration of its lenses in 18 months…

Furthermore, it is intended improve the skills of doctors Because not everyone knows everything. The company has explained its operation in more detail on its website.

To achieve this technology they have needed some 50 million images that identify a specific sequence within the more than 2,500 videos collected in 3D to facilitate the work of the doctor and that he knows what he has to do at all times.

Thanks to Artificial Intelligence, it will be possible to verify that the steps are followed correctly and it is intended “help support staff provide guidance as needed without disrupting their concentration” explained Raytheon BBN scientist Brian VanVoorst.

His first test is scheduled to take place in a year and a half so that all the data collected by the MAGIC IA program is later used by the research community to keep experimenting with this type of technology.

With this device you will not only benefit the doctors in their work, but also Patients will be offered improved care thanks to an AI that achieves great precision in the processes.

At the moment its use is only planned in conflict zones and that require greater pressure on the toilets, although It is not ruled out that this type of device will end up being part of hospitals around the world.

How to establish the duration of a medical consultation?

The BEST and WORST places to sleep during the medical call, has it touched you?