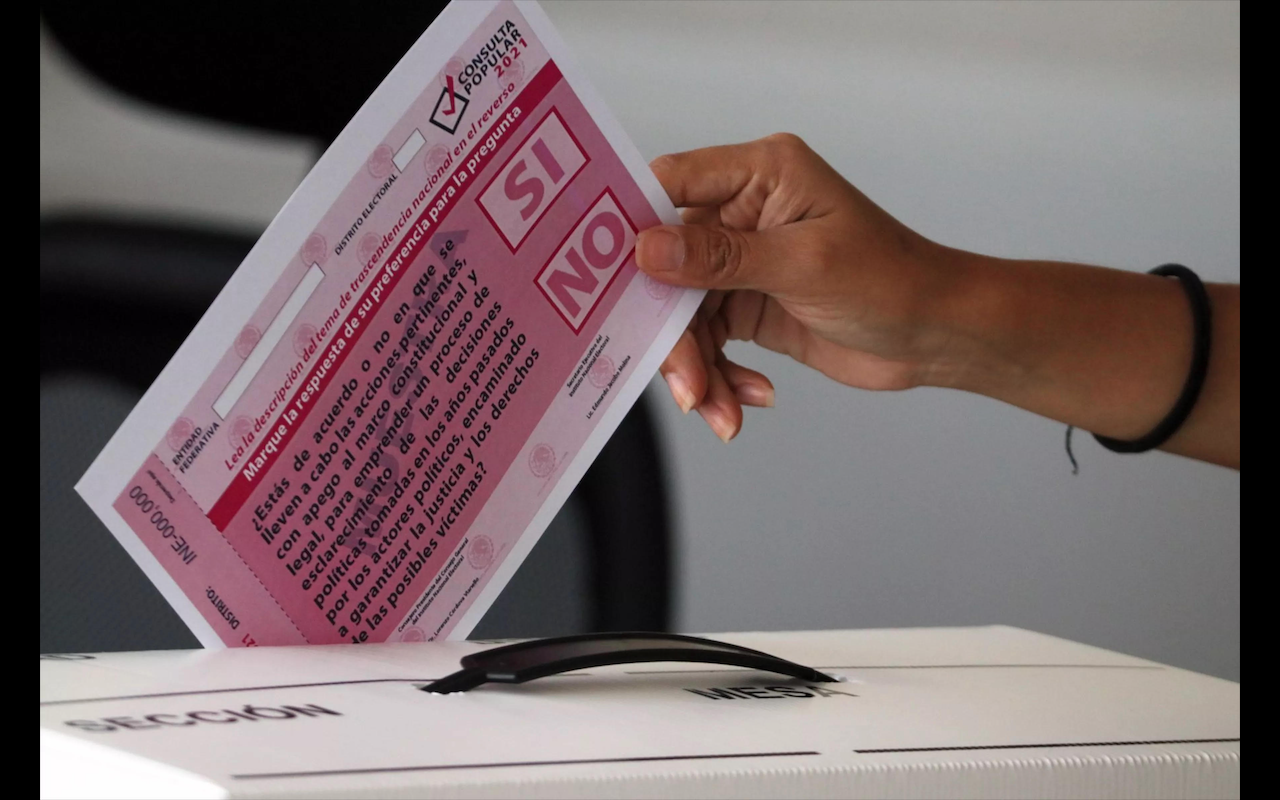 Today, August 1, the popular consultation on the trial of former presidents that both the Federal Government and the INE have released in recent weeks.

For this day, a total of 98 million Mexicans have been summoned in the first democratic exercise of this nature to express their opinion regarding the trial of former presidents. To do this, they must answer the following question:

Do you agree or not that the pertinent actions are carried out in accordance with the constitutional and legal framework, to undertake a process of clarification of the political decisions made in the past years by political actors, aimed at guaranteeing justice and the rights of potential victims?

But let’s go in parts:

2021 comprises the third year in which Andrés Manuel López Obrador exercises the figure of President of Mexico, he achieved that he achieved in the 2018 elections with just over 30 million votes, which represented 53.19 of the voters’ preference.

Andrés Manuel López Obrador came from two failed electoral processes and an extensive campaign that lasted approximately 12 years, from 2006, when he ran for the presidency for the first time, to 2018, the year in which he consolidated his project at the polls. .

Throughout those more than ten years, the current president built a strong image and discourse, with which his supporters identified and that, to this day, they continue to support.

The image, in terms of politics, more than a resource, is a tool, a strategy that, well positioned, is capable of bringing any candidate to power. But not only that, it is also vital to maintain said power during the stipulated term of office.

Now, the image is also a speech, it represents the ideas that are expressed in a statement, in a communication medium, on some stage, wherever. In politics, the image and the speech are the most essential weapons to elevate any message.

In that sense, Andrés Manuel López Obrador, since before he became president -in campaign times-, has always known how to handle and distribute his message (his image) wherever he goes; he knows how to adapt to the place he is in and, once on it, he spreads his word. Your ideas. Your image.

Going back to the days when he was just another candidate for the presidency -a candidate, however, strong, with ample chances of winning, according to the polls-, the current head of the federal executive had already been announcing some of his ideas or proposals that now , already as President of Mexico, has carried out. One of them, one of the most important, is the Popular Consultation in which, through the National Electoral Institute (INE), more than 90 million Mexicans will decide on the trial of former presidents, whether or not, in the legal framework, the corresponding legal actions against the former presidents that comprise from 1988 to 2018.

Breaking down a bit about what Andrés Manuel López Obrador has represented in terms of image and discourse, in Merca 2.0 We spoke with Carlos Bonilla, founding partner and Executive Vice President of AB Estudio de Comunicación, talking about the image and the speech of the current President of Mexico, he mentioned the following:

“(Andrés Manuel López Obrador) has conformed an unobjectionable speech. No one can oppose its fight against corruption and give priority to the population that is in extreme poverty. This discursive line has given him great insight into the segment to which his messages are directed. So much so that, despite his errors and omissions in government management, his popularity has not been affected, strictly speaking.

According to data revealed by Consulta Mitofsky for El Economista at the end of June of this year, López Obrador’s approval is at 58 percent, going up a notch compared to what was achieved last May, but without reaching the 61 percent it registered. in April.

Part of this fall, although tiny, is due to that same strategy that we hear every day during his morning conferences, where he has formed a kind of front against the opposition. On this, Carlos Bonilla has said that:

“His big mistakes are that of his confrontational discourse with various sectors, the polarization that he has caused with his Manichean discourse and, above all, lying as a pattern of conduct, which has undermined his credibility among knowledgeable and thinking people.”

In addition, “The overexposure in the media, which has caused his morning lectures to no longer be taken seriously and has devalued the image of the president, because he does not leave any issue unanswered, for which he has to resort to lies or the“ other data”.

Since the arrival of López Obrador to the National Palace, the morning conferences have become the space for dialogue on what is currently happening in the country. Although, at the beginning, it lent itself to an interesting political exercise in terms of the debate of ideas, the reality is that, to this day, they have worn down the president’s own image.

Every day, starting at seven in the morning, one more confrontational exercise is carried out, in which the president gives us his information – “his data” – on various topics, be it insecurity, corruption, Covid-19 and even about fake news. It should be noted that their information does not correspond to what, many times, various reporters and journalists have. Then, you enter a terrain of confrontation and there Andrés Manuel López Obrador has woven an effective speech, pointing out the mistakes of the past.

From there it has also built the power that it now has and that has maintained it with acceptance levels above the average. That, added to the weak opposition it has today.

As part of the image that has been drawn for years, the morning conferences are also the space to remember that this is “a government for the people”, a government that thinks more of the poor. He has even said it himself.

“The challenge was for him to be perceived as a president close to the people, but his radicalism has caused the presidential figure to not be respected. He has forgotten that the inauguration of the president of the republic is carried out 24 hours a day of each day of his mandate and that his voice in international forums is the voice of the country. He has forgotten that he has to govern for everyone and not just for one sector, discriminating against those who do not think like him, ”says Carlos Bonilla in this regard.

Even before becoming president, Andrés Manuel López Obrador was already talking about leading trial of former presidents that, according to his words, they have “looted” the country. It is not a new speech in him.

Today, however, it is a reality and the Popular Consultation will decide the fate of Carlos Salinas de Gortari (1988 – 1994), Ernesto Zedillo Ponce de León (1994 – 2000), Vicente Fox Quesada (2000 – 2006), Felipe Calderón Hinojosa (2006 – 2012) and Enrique Peña Nieto (2012 – 2018). According to Carlos Bonilla, this query is “One more occurrence of AMLO that will only serve to feed his discourse that all the ills of the country are due to the governmental efforts that preceded him. It will be a waste of resources that does not correspond to the critical economic situation that the country is experiencing and will not set the tone for any legal action, because it is ambiguous and does not identify a specific actor ”.

According to a survey by El Financiero, published on July 28, of 100 percent of the people consulted, 77 percent responded that they would vote in favor of carrying out the pertinent legal actions to clarify the political decisions made by the former presidents of Mexico. However, 31 percent indicated that they are not interested in participating.

What use would it be for Andrés Manuel López Obrador or Morena to hold this popular consultation of the trial of former presidents?

Experts point out that it could be the push that both need, first, in the face of the revocation of the mandate next year and, secondly, on the way to the presidential elections of 2024, of which the first candidate, Marcelo Ebrard, has already been uncovered. , current head of the Ministry of Foreign Relations (SRE).

The specialist interviewed by Merca 2.0 mention that “AMLO’s followers (the same as Morena’s) are captivated by the president’s speech and defend him tooth and nail. It will not change. In the sectors that oppose the official discourse and AMLO’s style of government, they will be convinced that the consultation is a circus and one more of the tricks to distract public opinion from the great national problems and subscribe to the discourse that all the The country’s ills are the fault of past government efforts.

The very low participation that the consultation will have will not provoke animosity towards the “actors of the past” that AMLO is looking for. I believe that it has more possibilities of paying for the growing discredit of this government management, which has not made significant progress in solving any of the great national problems. Distracting resources are running out and as they cannot be replaced with achievements, animosity towards government management is likely to be exacerbated.

The crisis suffered by Morena tends to worsen, more with the ineffable decision to open the succession to the middle of the government administration. If it were not for the weakness of the opposition, frankly non-existent, Morena would be in serious danger of losing in the next elections ”.

Undoubtedly, what will happen this day will not go unnoticed, that has been clear. Of course, there is a general (or generalized) discontent on the part of the population regarding the management that previous presidents have made of the country. The high levels of insecurity that continue to increase every six years, the great acts of corruption, the growing unemployment, among other issues of national interest, have not been to the liking of society.

Part of that discontent was what led Andrés Manuel López Obrador to the presidency in 2018 and, yes, a voter base that he collected over the course of 12 years – at least – of his political campaign.

But will the query about the trial of former presidents respect the image of the president and Morena? To say of Carlos Bonilla: “I think that if it had been carried out as the president intended, it would have served Morena, due to the effect of the demonization of previous leaders. The consultation that resulted will not benefit Morena and will show the weakness of the government and its limited drive to convince people to go to the polls for something that does not make sense.

5 devices and technologies that you will only see in China