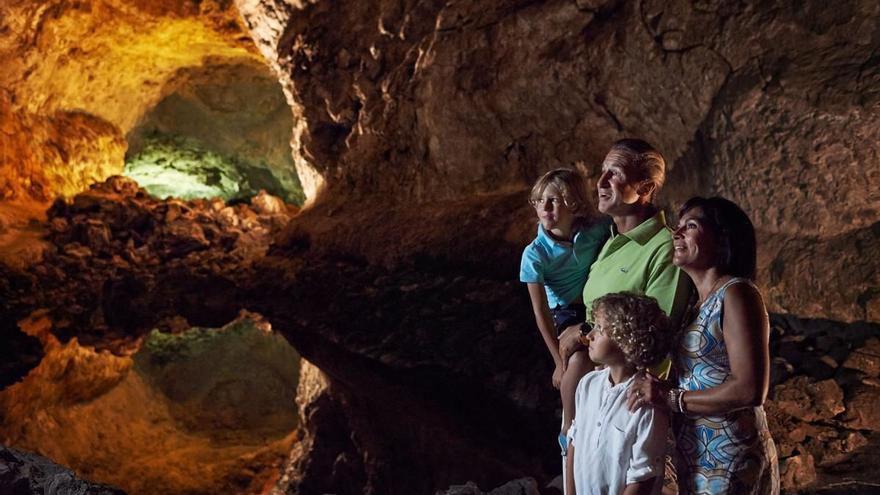 There are 15 geoparks in Spain where it is possible to contemplate the history of the Earth. A geopark is a natural space that houses unique and singular geological forms that are of great scientific relevance because they are a clear demonstration of the evolution of the Earth., the climatic changes produced over the centuries and their mark on the development of humanity itself.

In 2015, UNESCO recognized the importance of these natural areas, rich for their geological, mineralogical or paleontological heritage, and created the qualification of ‘UNESCO Global Geopark’. Spain is the second country in the world with the highest number, a fortnight, behind China, which is home to 41 geoparks.

Two large physiographic units stand out in this geopark. On the one hand, the volcanic mountain range of Cabo, the part on the surface of an entire extensive magmatic area generated after the collision of the African and European tectonic plates, and which, at present, is submerged in the Alboran area, with between 6 and 15 million years old. On the other, the literal plain of the Bay of Almería, witness to the evolution of the Mediterranean coast since the Pleistocene.

The Almeria geopark was integrated into the Unesco World Geoparks Network in 2006 although it was previously classified as a Maritime-Terrestrial Natural Park and other protection figures.

Since 1988, the Subbetic Sierras have been protected under the protection of a Natural Park and in 2006 they were included in the Unesco Global Network of Geoparks. It has an area of ​​32,560 hectares of karst landscape.

This geopark is the memory of all the changes to which the Sea of ​​Tethys was subjected, which bathed the shores of Pangea (the supercontinent in which the current five were united before fracturing) 250 million years ago. Part of these sea beds ended up rising after the collision of plates, giving rise to the mountainous areas that form the Subbetic Sierras.

With an area of ​​more than 117,400 hectares, it is one of the largest natural parks in Andalusia, extending over a dozen municipalities. Since 2015 it has been listed as a UNESCO World Geopark.

This natural space houses a great geological and archaeological wealth with more than 700 million years and an important mining past that have generated numerous Points of Geological Interest and three great natural monuments such as the Huesna waterfalls, the Cerro del Hierro and the fossil footprints of jellyfish from Constantine.

Declared a World Geopark by UNESCO in 2015, that of central Catalonia is one of the vestiges of the sea that preceded the rise of the Pyrenees 36 million years ago, which has left a very unique geological and mining landscape full of impressive cavities with remains of prehistoric human and animal life.

The Caves of Montserrat de Collbató or Cuevas del Salnitre stand out, with a route of 500 meters through the interior of the mountain and the Toll Caves, with a total extension of 1,148 meters deep, although with a visible part of 158 meters. The Toll cave is one of the richest prehistoric cavities in Europe due to its remains of fauna from the Quaternary era (rhinoceros, cave bear, primitive ox & mldr;) and also preserves samples of the human presence of Neanderthal man.

The Isla del Hierro has been cataloged since 2000 as a Biosphere Reserve and since 2015 as a UNESCO World Geopark, a figure that covers its entire land territory and part of a marine area that surrounds the island, that is, about 595 kilometers squares.

It is popularly known as the “island of 1,000 volcanoes & rdquor; since it has more than 500 open craters and 300 that are covered by remains of lava. Its most recent volcanic activity was an underwater eruption in 2011.

To the north of Castilla y León is the Las Loras Global Geopark, declared by UNESCO in 2017. Within the geopark is the Hoces del Ebro y Rudrón Natural Park, the Tuerces Natural Space, the Covalagua Natural Space and the Humada-Peña Amaya Special Protection Area for Birds.

This geopark is a unique enclave due to its karst landscape and in which sedimentary vestiges of the Mesozoic era (252 million years ago) are preserved. In addition, floral macro-fossils (visible to the naked eye) may be found from the Upper Jurassic, remains of a Camptosaurus (herbivorous dinosaur), as well as corals and rudists from the Upper Cretaceous.

The Maestrazgo Geopark was once again integrated into the Unesco Global Geoparks Network in 2019 after being excluded in 2017 for not having the support of the Government, an unprecedented fact in this international organization.

This geopark spans more than 43 Teruel municipalities, including Galve, the town where the first dinosaur was found in Spain, the Aragosaurus, and which houses important remains of dinosaurs belonging to the Jurassic-Cretaceous period. Other points of interest are the Cuevas de Cristal Natural Monument, the El Recuenco cave and the Cañizar del Olivar.

Read:  Julieta Loaiza is the new president of the Board of Directors of the IAB

UNESCO declared it a World Geopark in 2015, a territory that covers 2,200 square kilometers of the Sobrarbe region, where the Ordesa y Monte Perdido National Park, the Sierras y Cañones de Guara Natural Park, the Parque de Posets-Maladeta and the Natural Monument of the Pyrenean Glaciers.

Located on the southern slopes of the Pyrenees, this geopark has geological remains from more than 500 million years ago as well as rocks from the Mesozoic and Cenozoic periods that have formed the highest calcareous massif in Europe, Monte Perdido, with peaks greater than 3,000 meters.

Last year the Granada Geopark joined the UNESCO Global Geoparks Network. Located in the eastern part of Andalusia, it extends over 4,722 square kilometers of 47 Granada municipalities.

The main attraction of this geopark are the valleys of the north of Granada, created by river erosion in the last half a million years. This natural space enjoys one of the best sediment records of the continental Quaternary of Europe and a great landscape of gullies or badlands because for some five million years a large part of the river system that made up the territory had no outlet to the sea and drained its waters to a great lake.

10. Geopark of the Basque Coast (Gipuzkoa)

The geopark of the Basque Coast, sandwiched between the Basque mountains and the Cantabrian Sea along the municipalities of Deba, Mutriku and Zumaia entered the Unesco Global Network in 2015.

A deposit of flysch 5,000 meters thick (geological formations that alternate hard materials and soft materials) represents an important record of 60 million of the Earth’s history, including several global catastrophes in much earlier times, such as the last of the five mass extinctions that have taken place on the planet, the Cretaceous-Tertiary which is attributed to the impact of a large asteroid 65 million years ago.

To the southeast of the Extremadura province of Cáceres, between the Tagus and Guadiana river basins, is the Villuercas-Ibores-Jara geopark, with an area of ​​2,544 square kilometers, included in the Unesco list since 2011. For Its important heritage, this space is also in the Natura 2000 Network.

This geopark preserves palatological remains of great value, since they allow us to understand what is known as the “Cambrian Biotic Explosion & rdquor; 540 million years ago, which was a sudden outbreak of life on Earth that provided the background for many animal species of the present. Also noteworthy are the presence of shelters and cave paintings. One of the most attractive areas is the Cueva del Castañar de Ibor, declared a Natural Monument in 1997.

In 2015, Unesco included the 4,500 square kilometers of the Molina Alto-Tajo Geopark in its Global Network, which also includes other protected areas such as the Alto Tajo Natural Park or the Sierra de Caldereros Natural Monument.

Its geological remains provide evidence of the evolution of the planet for more than 650 million years and it has important natural environments such as the canyons of the Tagus and Gallo rivers, the Checa dropstone (a rock that was trapped between several glaciers and ended falling to the seabed) or the fossil forest of the Sierra de Aragoncillo, one of the oldest fossil log formations in the world.

This Canarian geopark recognized by UNESCO in 2015 includes the entire island of Lanzarote, as well as the islands of La Graciosa, Montaña Clara, Roque del Este, Roque del Oeste and Alegranza, known as the Chinijo Archipelago. 14% of the geopark is protected by up to 13 environmental figures and is also classified as a Biosphere Reserve.

These islands enjoy are a good example of the volcanism that characterizes the Canary Islands and include formations of all kinds: volcanic tubes, cones, extensions of badlands, etc.

In the central part of the South Pyrenees is the Geopark of Orígens, in Lleida, recognized by UNESCO in 2018. This natural space extends throughout 19 municipalities with an area of ​​more than 2,000 square kilometers.

This space preserves rocks from the Upper Cretaceous, where remains of bones, footprints and even eggs of the last dinosaurs in Europe have appeared. Of the great geological, paleontological and mining heritage that it enjoys, the Cova del Tabac stands out, declared a World Heritage Site by UNESCO in 1998. (Main photo of the news, above).

In 2019, Unesco decided to include the Courel Mountains in its Global Network of Geoparks, a territory with more than 577 square kilometers that extends through the municipalities of Folgoso do Courel, Quiroga and Ribas de Sil.

This geopark rests on the Iberian Massif and is formed by rocks ranging from the Neoproterozoic to the Carboniferous, where karst cavities and paleontological and mineralogical remains can be found, as well as clear signs of glacial modeling. The passage of the Lor, Louzara, Quiroga, Soldón and Selmo rivers have contributed to carving deep valleys and canyons due to erosion.