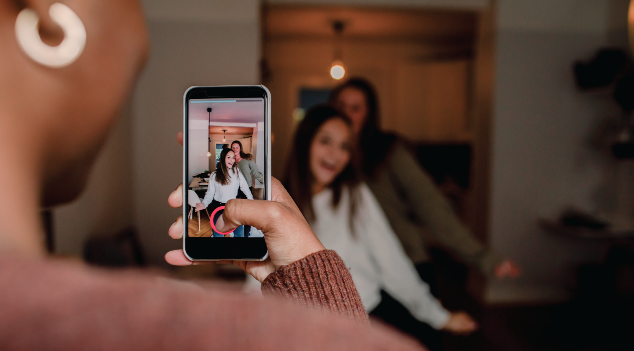 The world of social networks is becoming bigger and more important in people’s lives. Given that, as concerns about the harmful effects of social networks on adolescents, platforms, from Snapchat to TikTok to Instagram, are embracing new controls and features for parents which they say will make their services more secure and age-appropriate.

Although most of these platforms require you to be of legal age to register, many children and adolescents have profiles on these networks, exposing themselves to many dangers. The digital community is very large and, according to a report by We Are Social and Hootsuite, In actuality there are 4.62 billion users worldwide, representing a year-over-year growth of more than 10 percent.

Given this data, it is normal to find that the penetration of the Internet among the different generations can be seen in the younger age groups that have a fairly marked digital approach. According to data from report ‘Social networks: angels and demons’, the youngest users, belonging to generation Z, use the internet “intensively”.

The survey revealed that fathers and mothers of children between the ages of eight and 17 use social networks for an average consumption of three hours daily, and more than five hours on weekends. While nine out of ten young people between 8 and 17 years old use them, above the total average of the national population that is equivalent to 82.1 percent.

TikTok is the most popular social app used by US teens, according to a new report released Wednesday by the Pew Research Center, who found that the 67 percent says it uses the Chinese-owned video-sharing platform. The same report mentioned that Instagramowned by Facebook parent Meta, is the second most popular app among teens, with a 62 percent which says it uses it, followed by Snapchat with a 59 percent. Not surprisingly, only 32 percent of teens reported ever using Facebook, down from 71 percent in 2014 and 2015.

Despite the great efforts of technology companies such as Meta, TikTok and SnapChat to incorporate various privacy tools and parental control functions in the accounts of the youngest, the problems caused by the digital world in children continue to be recorded.

Read:  recommendations that will help you achieve your goals

Experts report that algorithms drive endless content that can drag anyone, not just teenagers, into danger. Though the tools do offer some help, like blocking strangers from messaging the kids.

But they also share some deeper flaws, starting with the fact that teens can get around boundaries by lying about their age.. The platforms also place the burden of application on the parents, doing little or nothing to detect inappropriate and harmful material presented by algorithms that can affect the mental and physical well-being of adolescents.

“These platforms know that their algorithms can sometimes amplify harmful content and they are not taking steps to stop that,” said Irene Ly, a privacy advisor for the nonprofit organization Common Sense Media in an investigation presented by the NYPost.

The more teens keep scrolling, the more they get involved, and the more engaged they are, the more profitable they are for the platforms, he said. “I don’t think they have too much incentive to change that.”

A clear example of these parental controls is the Snapchat social network, which on Tuesday introduced new ones, calling them the “family center”, and which he presented as a tool that allows parents to see who their teenagers are sending messages to, although not the content of the messages themselves.

For her part, Nona Farahnik Yadegar, director of platform policy and social impact at Snap, compares it to parents who want to know who their children are dating.

But oftentimes such policing can be difficult, as many children use a bewildering variety of platforms, all of which are constantly evolving, said Josh Golin, executive director of the children’s digital advocacy group Fairplay.

“It is much better to demand that platforms make them safer by design and by default, rather than increasing the workload of parents who are already overloaded,” he added.

This issue is in the public spotlight right now, as child safety and teen mental health are front and center in criticism of tech companies from both Democrats and Republicans in the US. . That is why in that country there are states, which have been much more aggressive in regulating technology companies than the federal government, they are also paying attention to the matter.

Recall that in March, several state attorneys general launched a nationwide investigation into TikTok and its possible harmful effects on the mental health of young users. As well as the notorious case of former Facebook employee turned whistleblower Frances Haugen, who exposed an internal company investigation that concluded the social network’s attention-seeking algorithms contributed to emotional and mental health problems among teens. who use Instagram, especially girls.