Djokovic defeats Zverev and will face Medvedev in the Open final 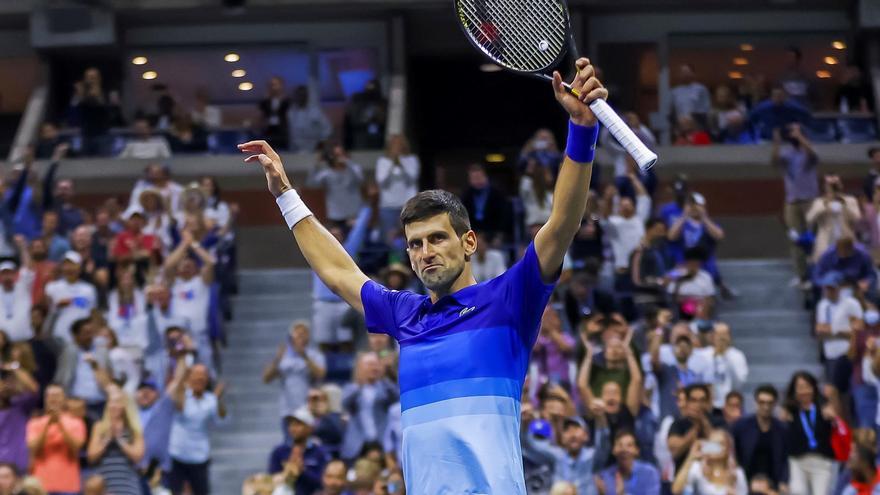 Serbian Novak Djokovic, number one in the world, He beat German Alexander Zverev on Friday 4-6, 6-2, 6-4, 4-6 and 6-2, fourth seed, and reached the final of the US Open for the ninth time in 16 appearances. His rival will be Russian Daniil Medvedev, second seed, who in the first week beat 6-4, 7-5 and 6-2 over twelfth-seeded Canadian teenager Felix Auger-Aliassime. The final match between Djokovic, 34, and Medevev, 25, to be played on Sunday at Arthur Ashe Stadium center court, will be their ninth as professionals with a 5-3 lead for the Serbian tennis player.

Djokovic, after the victory against Zverev, with whom he now has a 7-3 record, is perfect 27-0 in this season’s Grand Slam matches and he is one to win all four tournaments in the same year for the first time for a tennis player since the Australian Rod Laver did it in 1969.

The game that lasted three hours and 34 minutes, left Dokovic with 41 winners for 49 unforced errors, proving that the world number one, who also posted 12 aces, with two double faults, could not play his best tennis. against Zverec, who had beaten him in the Tokyo 2020 semifinals. Hence, Zverev won the first set with authority after Djokovic double-faulted in the ninth game and the German tennis player secured the sleeve with his serve. Djokovic lost the first set against Kei Nishikori of Japan, Jenson Brooksby of America and Wimbledon finalist Matteo Berrettini of Italy.

But the world number one, as he had done in the four previous matches in which he lost the first set, reacted immediately with his best tennis to tie the score in the second after breaking Zverev’s serve twice, that in the first one he had not yielded a single breaking point.

Read:  Djokovic is crowned in Rome for the sixth time

The world number one maintained his dominance and control of the game in the third set after breaking Zverev’s serve in a grueling final game to win the set 6-4, leaving him one set away from playing another Grand title for the twenty-first time. Slam. Zverev took a 53-shot rally during the final game, putting his hands on his knees after a winning shot. But Djokovic won the next point to take the lead. Despite having lost the sleeve, Zverev maintained his concentration and his great tennis level to tie the score and force the fifth set, something that Djokovic had not allowed until now. Zverev, who came back to beat Djokovic in the Olympic semifinals, again found a way to break the number one serve and dominate him from the back of the court.

Everything was left to decide in the fifth set, and again, when it seemed that Djokovic was the one who had lost the moment, he emerged with the key shots and the two surprise breaks that gave him the partial advantage of 4-0 were all he needed to secure the victory and continue with the owner to complete the Grand Slam cycle.

Djokovic is now 4-0 this year in matches that lasted five sets, while Zverev, who broke his streak of 16 consecutive wins since the 2020 Tokyo Olympics, he has gone 1-3, including last year’s loss to Austrian Dominic Thiem in the Open final.