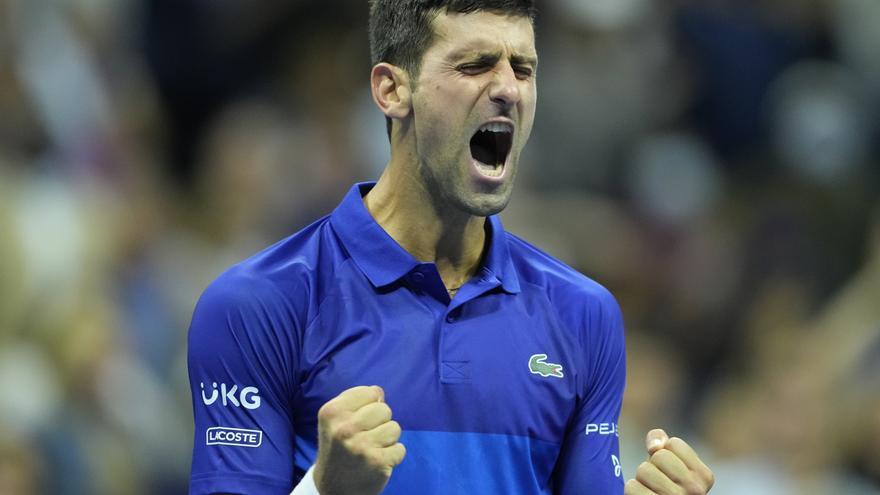 While the authorities ponder, the judges analyze, public opinion is divided and the family is enraged, Novak Djokovic awaits the hours and the arrival of a solution to resolve his situation, his eventual return to Belgrade, being held in a hotel of average hair. or his stay in Melbourne to play the Australian Open, the first Grand Slam of the season.

With the challenge of winning his tenth trophy at Melbourne Park and raising the number of great successes to twenty-one to become the best in history, Djokovic it gobbles up messages of support before others, more numerous, that give the reason to the oceanic jurisdiction.

It seems that the world’s number one will not have an answer until Monday, when an Australian court decides on his deportation after the country’s authorities revoked his visa for failing to comply with measures against COVID-19.

Nothing made think Djokovic while he was flying to Melbourne International Airport that once he landed that medical exemption that authorized him to play the Australian Open despite not being vaccinated was going to be questioned so soon. It was to reach the terminal counter and start the mess.

The border authorities rejected the documentation presented by the Serb and his team and canceled his visa. Nole He was separated, transferred to an alcove where, stripped of his belongings and guarded by policemen, he had a long conversation with the officials before being transferred to the hotel where he had to settle down and where he waits.

The Park Hotel Carlton, where other visa-free travelers are neighbors, is a provisional detention center with refugees seeking asylum and there Djokovic awaits a solution while the world is agitated by this matter.

Lawyers for the world’s number one have already appealed the authorities’ decision and the Federal Circuit Court has set a hearing to make a decision one way or the other on Monday. The situation has become a diplomatic issue, beyond the presence or not at a major sporting event.

Time plays against Djokovic, who intends to start the defense of the champion title in Australia. The tournament starts on January 17 and the Serbian already has fewer hours of preparation.

A matter of state

While the Australian Prime Minister, Scott morrison, stressed that there are no special cases or exceptions among travelers who intend to enter the country, Serbia closes ranks around the best athlete in its history.

The Serbian President, Aleksandar vucic, stressed that Serbia is doing everything possible to have Novak transferred from the “infamous” hotel in Australia to a private home while awaiting the decision of the Australian judicial authorities. “It is what Novak has asked of his country and it is our obligation to protect our citizens,” he said. “A political campaign is being carried out against the world’s number one tennis player, with the Australian prime minister at the forefront,” added the Balkan leader.

“Everyone is clear about what it is about (…) I fear that this type of political harassment is going to continue because they have no other way to triumph in front of it,” said the Serbian president, who contacted Djokovic in, at least twice.

The family stresses that the tennis player has not violated any Australian law or regulation. “It is the biggest diplomatic sports scandal in history” and it likens Novak to Jesus Christ, whom they crucified, “and said some are now trying to” crucify, humiliate and bring the player to his knees.

“It is a political struggle that has nothing to do with sport,” insisted the father at a press conference in Belgrade, calling Australian Prime Minister Scott Morrison “a”shameless“that attacks the” pride “of the free world.

The athlete’s brother, Djordje djokovicHe noted that Novak does not want to go back until the decision. “He does not want because he wants justice and he is treated as a criminal and not as an athlete who has not committed any legal infraction,” he said.

World’s number one it has never been clear whether or not they have been vaccinated. You maintain that you contracted COVID-19 six months ago, one of the reasons you can apply for a medical exemption in Australia. A permit that was granted by Tennis Australia and the regional government of Victoria, where the tournament is played, despite warnings from the Australian health authorities that this type of quarantine-free permits would be rejected.

The commotion caused by this measure has been able to cause the authorities to back down and end up canceling the visa to Djokovic. The tennis star, whose lawyers will have to prove serious errors in revoking her visa, runs the risk of being banned from the country for three years.

Meanwhile, the world of tennis contemplates in amazement what happens around the number one. “We must trust people who know. What is happening is not good for anyone. I don’t handle all the details of what happened, so I can’t have a solid opinion & rdquor ;, he said Rafael Nadal. “I feel bad for him, but Novak knew the conditions beforehand,” he added.

Feliciano lopez, for his part, believes that “the Three Wise Men have brought a huge nonsense in the world of tennis.” “Nobody wants the number one in the world to be left without playing a Grand Slam. Sometimes what starts badly can end worse. Australia comes out very badly from all this. What a shame,” wrote the Spanish tennis player on his official Twitter account.

On the opposite side, the former tennis player and current captain of the Serbian Davis Cup team Viktor Troicki: “I do not remember that something like this happened to a world champion not only in tennis, to one of the greatest athletes of all time. I do not remember that an athlete was so mistreated by a government.”

We can save all this in 1Password, in addition to the passwords

10 changes that Spider-Man promoted in the Marvel Universe