Dispute between Canada and anti-vaccine truckers has a victim: bitcoin 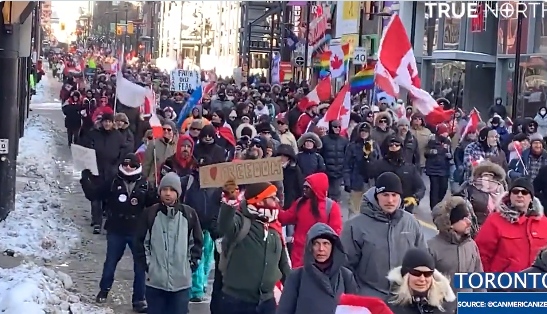 The protest of truck drivers in Canada (the so-called “Freedom Convoy”) is taking unprecedented dimensions. The latest news: the government, within the framework of the Emergencies Law, urges banks to freeze the assets of the protesters, even without a court order.

In addition, invoking the same law (only used once in peacetime), the government of Justin Trudeau wants to “freeze” the bitcoin accounts and any other cryptocurrency of the truckers.

Index hide
1 Why are truckers protesting in Canada?
2 Canada: what can happen to savings or investments in bitcoin

Why are truckers protesting in Canada?

There are many problems in all this. First, why are truckers in Canada protesting? The demonstrations, which are besieging the main cities of the country, are against compulsory vaccination against covid 19 for cross-border travel.

The Freedom Convoy is not over yet. pic.twitter.com/NTkMBRBQA6

Regarding the freezing of bank accounts, Canadian banks are in a dilemma: if they close them without a court order, they expose themselves to lawsuits from the owners of those accounts. Who will bear those costs? Nobody knows.

On the other hand, the government provision is not clear and does not detail which accounts can be closed and which cannot.

In the Canadian Congress, meanwhile, legislators discuss whether the invocation of the Emergency Law has been justified or not.

Crypto exchanges and platforms are also included in Trudeau’s attempt to freeze assets. The same as crowdfunding services. It is that through platforms such as GoFundMe, some protesters were receiving donations to pay for the demonstrations. This was confirmed by the deputy minister of Canada, Chrystia Freeland.

Read:  This book by Checo Pérez takes you into the biography of the famous pilot

Among the exceptional measures, the government contemplates powers outside the norm, such as seizing vehicles used for blockades and withdrawing drivers’ licenses.

Canada: what can happen to savings or investments in bitcoin

For those holding bitcoin or other cryptocurrencies in Canada, the problem is not really all-encompassing. Those most exposed are those with the tokens housed in accounts on centralized exchanges, such as Binance, FTX or Coinbase, for example, as these could be ordered by the government to freeze the assets.

On the contrary, those who have the assets in their addresses with private keys (especially in hardware devices), outside the centralized exchange ecosystem, are not at risk.

At least, they are not in this instance of the ban. They could be affected if the “hunt” is broader and includes addresses that exchanges have interacted with before.

Mexico and Canada agree on conditions for NAFTA