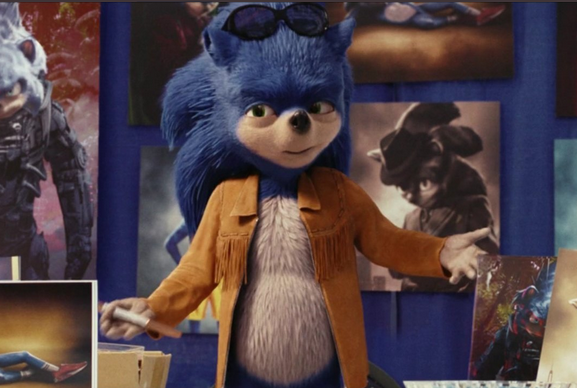 On April 30, 2019, the most famous hedgehog in the world became a trend because the trailer for his movie was released; however, many rated this design as one of the worst ever seen for an animated character in live action.

The result was a wave of criticism of the study Paramount Pictures resulted in the film delaying its release so that they could finish the CGI of the character on time.

However, and although today the sequel to the character has been a complete success, already with an improved design, no one can forget how this character could have looked in his individual film.

In fact, some users described this event as a pretty good marketing strategy, since they considered that the studio deliberately released an “ugly” design with the intention of hoarding attention and, in this way, generating a greater expectation for its new version.

This was the first official Sonic trailer where the Ugly Sonic could be seen:

Chip n’ Dale: Rescue Rangers arrives on the Disney + platform with the incredible inclusion of an unexpected character. The “Ugly Sonic” whose first appearance was in the trailer for his live-action movie returns for this incredible Disney proposal.

The release of this film and its marketing have shown that Disney knows how to do things in this area. Noticing the impact that the discarded design of the blue hedgehog obtained, the mouse company has “hung” on the trend so that there is more and more talk about its new premiere that, although it reaps a large number of fans, of course with no They have enjoyed a media impact as if Sonic did at the time.

Read:  They create "Funko" by Juanpa Zurita and the influencer's reaction surprises

Even some users have already released the scene where a protagonist interacts with Ugly Sonic, who comments that he is working on a reality show about his character.

This was the Ugly Sonic cameo during the Chip and Dale movie on Disney+:

The reaction of Internet users was immediate and in fact, against all odds, it has been quite positive, as some considered having been “quite harsh” with a design so little accepted at the time that, now, it has stolen hearts and the laughter of those who have already seen the scene.

This has been the reaction of social networks about the design of the Ugly Sonic:

UGLY SONIC IS BACK!!! pic.twitter.com/gZiX8zHPTq

Bruh I did not expect that the ugly sonic has returned in the new chip movie and dale pic.twitter.com/lzZL3HBalW

“All Internet After Seeing Ugly Sonic Back in Chip and Dale Movie”#ChipNDaleRescueRangers #sonic pic.twitter.com/ORY3jVI5V7

the arc of redemption

Now everyone loves Sonic ugly for embracing his ugliness https://t.co/bpyxAu0yYT

These two Sonic are co-existing at the same time and in the same year. pic.twitter.com/FU1y8GjOmV

Ugly Sonic appears in the Chip and Dale movie on Disney Plus hahahahahaha pic.twitter.com/hW62zMTreH

Netflix turns to Sonic to add subscribers; What is ‘Sonic Prime’ about?

In true Marvel fashion, Sonic prepares for his own multiverse

Horizon Forbidden West collector is cheaper than ever

Honda Civic 2022, prices and range of the renewed and electrified Japanese compact

Elon Musk forced his employees to return to an office without tables, Wi-Fi or enough parking