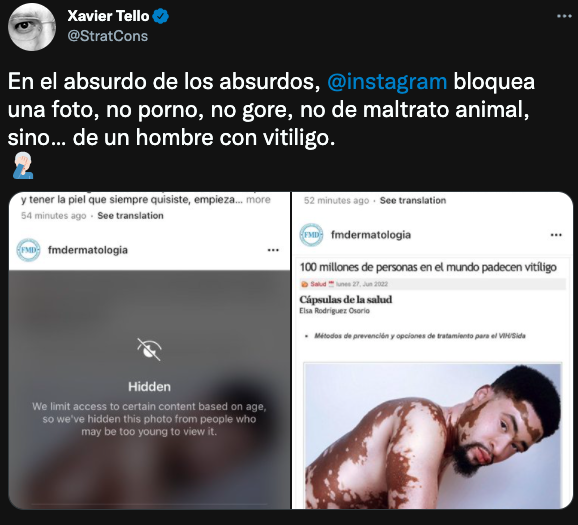 Social networks have become the favorite means of millions of people to interact with others. It is an alternative that allows you to be instantly informed of what is happening anywhere in the world. But a permanent discussion is about the rules that must exist within cyberspace. Now the discussion has been revived by the censorship suffered by the photograph of a man with vitiligo.

In this case, the culprit was Instagram. According to Statista, it remains within the thanks to its 1.4 billion active users globally. With this, it ranks fourth in popularity, just below Facebook, YouTube and WhatsApp.

For its part, this social network was conceived as a means of publishing photographs. Although over the years it has been transformed and now has more functions such as videos or live broadcasts.

One of Instagram’s rules is that you cannot upload explicit audiovisual material or material that may offend other users. It is a rule that is specified at the time of opening an account although it has never been clear what it means.

Index hide
1 What happened?
2 What is vitiligo?

Now he is in the middle of an argument due to the censorship of a photo of a man with vitiligo. Although it is a very innocent action and in fact the original reason was to raise awareness about this disease, the algorithm of the social network interpreted it as a harmful image.

Everything was generated last June 25 during the World Vitiligo Day. Naturally, during that date messages alluding to the date were published to publicize this problem and promote medical check-ups.

With the above in mind, the Mexican Federation of Dermatology posted a message accompanied by a photo of a man with vitiligo but inexplicably suffered from Instagram censorship. Instead, a message was displayed mentioning that the content was hidden because it could be harmful to other people.

For its part, it is not the first time that something similar has happened. On previous occasions Instagram has also censored photos of women breastfeeding on the pretext that it is about nudity. Therefore, now different groups have pointed out the hypocrisy of this social network.

It is a dermatological disease characterized by causing light spots on the skin of the body and face.

According to experts, it is estimated that there are 100 million people worldwide who suffer from vitiligo, although it is suspected that there is a significant underdiagnosis, in view of which it is essential to highlight that it usually appears before the second decade of life and has no cure. but it can be treated.

What car brand did TheGrefg popularize among youtubers