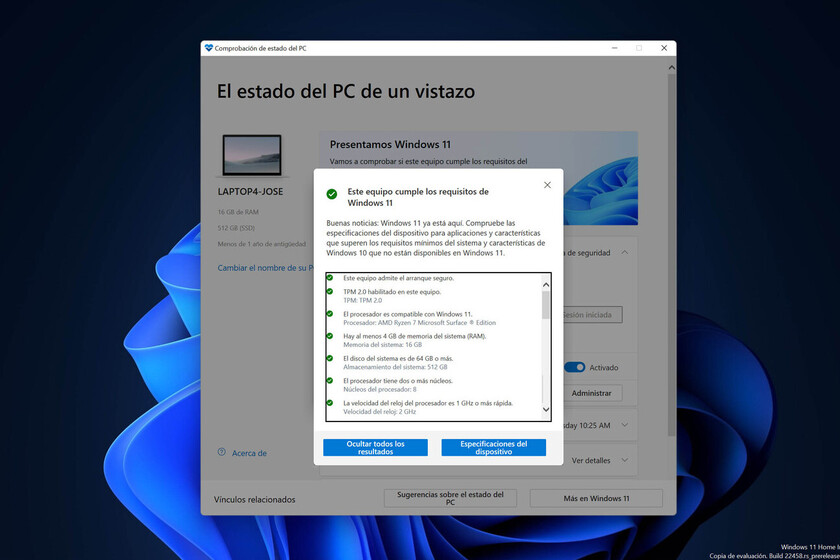 The arrival of Windows 11 has caused a huge tidal wave, especially due to the demanding requirements that on paper, would leave without the possibility of updating many devices. Installing Windows 11 however, would not be impossible on unsupported computers and Microsoft knowingly announced that they would not receive updates when installing Windows 11, something that apparently is not being fulfilled.

Microsoft had warned that all those unsupported devices that updated to Windows 11 would not have new updates through Windows Update once Windows 11 had been officially released. Windows 11 arrived on October 5 and yesterday it received the first Patch Tuesday … a patch that even unsupported computers received.

Patch Tuesday for everyone

This is what they say in HTNovo, where they have tried to install Windows 11 on a PC that did not meet Microsoft’s minimum criteria and that in theory should not receive operating system updates. That in theory, because in practice they affirm that yesterday they received the corresponding Patch Tuesday of October.

In fact they claim that a Windows 11 computer was updated a few hours ago with all packages made available by Microsoft. These patches included a new build with fixes and .NET Framework 3.5 and 4.8 along with the usual monthly malware removal tool.

These updates have downloaded and installed as if it were a compatible device And according to what they say, the system works perfectly without any type of failure or limitation.

Microsoft claimed at the time reliability, but also safety and compatibility reasons why these teams would no longer have updates. In fact, on the Microsoft page they make it clear that these computers will not be able to receive future versions of Windows 11 and will have to update through ISO in a clean way.

Read:  The Amazon Appstore appears in the Windows Store 11

“Once Windows 11 becomes widely available, these PCs will be excluded from distribution and will not be able to receive future versions of Windows 11 in the Insider Preview Program. These PCs must perform a clean install on Windows 10 with the media (ISO) we provide and then you can join the Release Preview Channel to preview Windows 10 updates. “

Apparently, Microsoft for now is not enforcing the limitations of which it had warned. It remains to be seen if this changes in the future or if, on the contrary, Microsoft does not find it easy to control the computers that can receive the updates that are being released.

Do you have an old Mac? Apple released an update for the

two versions with up to 108 megapixels, according to a well-known leaker