Decalogue to prevent contagion of monkeypox 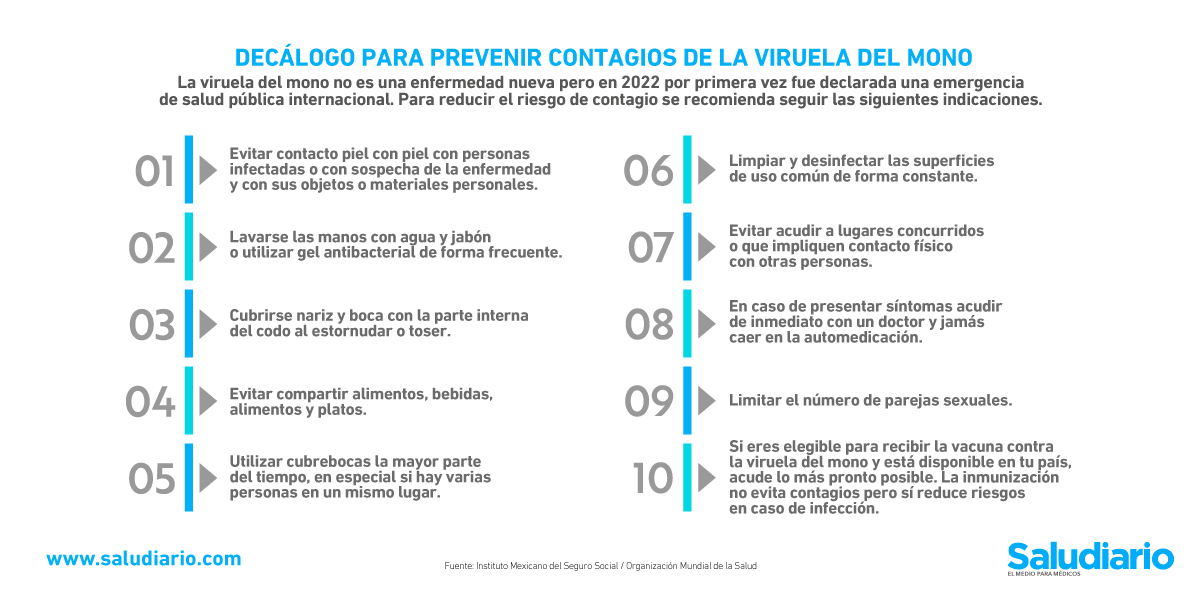 Prevention is always better than cure and can be applied in all areas of life. For this reason, now that the monkeypox has become a serious health problem, it is necessary to know the way in which contagion can be avoided. This is valuable information for both you and your patients.

Index hide
1 When and where did the problem arise?
2 Main symptoms of monkeypox

When and where did the problem arise?

In the first instance, it should always be made clear that it is not a new disease because the first human case occurred in 1970. At that time it occurred in the territory now occupied by the Democratic Republic of the Congo and eventually spread to other neighboring nations.

The difference is that for decades it was a health problem endemic to the African continent. At the beginning of this 21st century, some cases occurred in other regions of the world, but the outbreak was soon contained.

Instead, this 2022 arrived in Europe for the first time and so far cases have already been registered in more than 80 countries around the planet. In addition, more than 25,000 infected people have been registered and four deaths have occurred outside of Africa (India, Brazil and Spain).

Although the case fatality rate remains quite low does not mean that the disease should be underestimated. Similarly, although the majority of cases have occurred in men who have sex with men, in reality all people are exposed. In fact, infections have been reported in babies.

Something very important is to know the symptomatology to be able to detect a suspicious case. Although during the last months it has changed, the main general discomforts are the following:

Read:  Decalogue to protect your skin (and that of your patients) from the cold

Because it is a current issue, studies are constantly being carried out with patients who have been infected in recent months. One of the most recent works was carried out by Harvard University and the results were published in the Nature magazine.

Most notably, two new symptoms of monkeypox were identified. Is about conjunctivitis and edema of the eyelids. It also mentions that 20 percent of patients develop temporary eye disorders.

The same research indicates that symptoms typically last two to four weeks. After this period, the vast majority of patients recover, although in some cases the marks on the body remain longer.

On the other hand, based on current evidence, some forms of prevent the spread of monkeypox. Most of the advice is the same as that which has been issued since the onset of Covid-19, but some is new.

In this case, the first and most important thing is to avoid skin-to-skin contact with people who are infected or suspected of having the disease and with their personal objects or materials.

Similarly, the use of face masks and constant disinfection of commonly used surfaces is recommended. While another indication is to receive the monkeypox vaccine. So far Jynneos is the most popular but has only been approved in a few countries.

For now, we share with you a graph prepared by the editorial team of salutary with some instructions for prevent the spread of monkeypox.

The state of health of sports commentator André Marín is worrying

Kilos COVID, the other negative consequence that the pandemic has left

5 secrets of the ENARM that very few doctors know