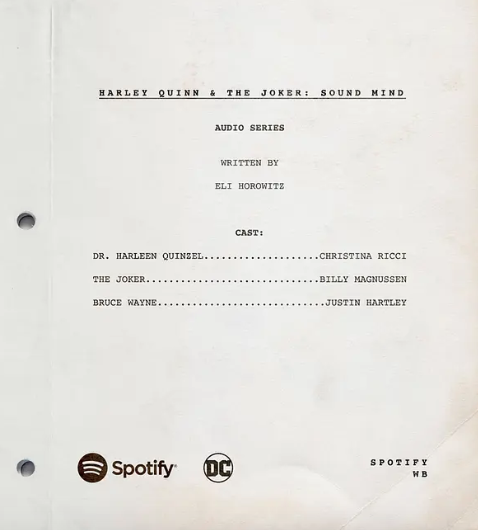 Spotify, Warner Bros and DC have announced that they will continue with their strategy in podcast and will team up with Spotify for a second season of ‘Batman Unburied’where Christina Ricci will play harley quinn to tell the popular character’s origin story (from Harley’s perspective) in the second installment ofHarley Quinn & The Joker: Sound Mind’.

While consumers are wired to respond to images, the video industry podcast has grown significantly over the years. One of the reasons for its success is the comfort it offersConsidering that multitasking has become second nature to us, this medium allows us to obtain information while we continue with our daily lives, whether it is to go to work, cook or exercise.

Currently, there are more than 2 million active podcasts, according to Podcast Insights 2021. Three years ago, there was only about a quarter of that; Regarding the number of episodes of podcast specifically, as of April 2021 there were over 48 million episodes.

This may sound like a trivial statistic to mention, but considering that in 2006 just over 20 percent of the adult population in the US were aware of the podcast, is something big. The advance was rapid and the vast majority (78 percent) of the population has taken notice.

According to data shared by The Infinite Dial 2021almost 60 percent of all American consumers over the age of 12 listen to podcast. In addition, the number of listeners of podcast has increased steadily over the last eight years. While it only increased from 55 percent to 57 percent last year, it has more than doubled in the last 10 years.

Read:  Harry Potter, Star Wars or Lord of the Rings? This is what netizens say

So it’s no surprise that companies like DC are moving from the big screen to the podcast. However, other companies that have ventured into the same line are CherninEntertainmentthe American production company behind the trilogy’ filmsPlanet of the Apes and Ford v Ferrari who’ signed an agreement with Spotify last month to adapt the streaming music giant’s growing library of narrative podcasts into movies and TV series.

Under the association Chernin and Spotify They will win mutually. Chernin will get movie ideas from the original audio programs of spotify, while Spotify you’ll be able to sift through Chernin’s heap of unapproved IP for concepts that might make more sense like podcast. Of course, if those podcast are successful, they can still be made into movies.

In the case of DC the series, which has begun production, was developed by the writer and executive producer of homecoming, Eli Horowitz, and tells the story of Gotham villain Harley Quinn from her perspective, rather than that of the Joker. The series begins when Quinn is still known as the Dr. Harleen Quinzelone of the best psychologists of Arkham Asylum who is determined to help patients her colleagues have given up on.

Harley Quinn & The Joker: Sound Mind is the second audio series to be released as part of a multi-year licensing agreement between Spotify and Warner Bros./DC. First, Batman Unburiedwas a quick success and reached the top spot on the Spotify charts in 17 markets, even at one point unseating The Joe Rogan Experience in the US.

Misik presents 5 interview podcasts to learn more about the world