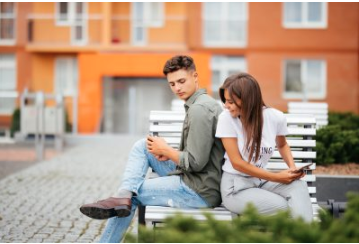 The foundation of digital platforms and social networks within the new normality, directly transformed the way in which society relates, this forced by social distancing, since the need for interaction of people remaineddespite the physical limitations, an aspect that encouraged the growing number of current Internet users, who not only live together, since they also work, trade, study and seek affectionate relationships.

The great growth within the digital community, today represents just over 62.5 percent of the world’s population, according to the latest report from We Are Social, Digital Report 2022, a figure that shows the importance that a community of more than 4 thousand 950 million Internet users has on the way in which society now relates and seeks to establish affective relationships.

The search for a partner or relationship is increasingly done in a more digital way, according to what is indicated in the report of TheCui.com, In Mexico alone, 30.2 percent of dating app users enter with the aim of establishing a formal relationship, while 28.9 percent only look for casual encounters.

Dating apps targeted by scammers; how to prevent flirting fraud

In the wake of the exposure of the scammer documentary series of Tinderby the Netflix streaming platform, hundreds of similar cases have come to light, so much so that within the United States alone, from 2016 to 2020, losses from romance scams increased fourfold according to the Federal Trade Commission; however, it is estimated that the number could be even higher, since due to stigma it is not reported.

Read:  Cortefiel guest dresses for weddings, baptisms and communions (and how to combine them for a brutal look)

Likewise, it was announced that within the national territory, this crime went from 5,675 in 2021 to 9,830 this year, according to what was indicated by the Attorney General of the Republic (FGR), being Tinder is the most reported application for crimes related to fraud, identity theft, express kidnapping, among others. For this reason, various aspects must be known that allow Internet users not to enter these scams, such as:

According to what was indicated by the commercial president of Featurespace in Latin America, Saúl Olivares, pointed out that the majority ofPeople are unaware of the real threat posed by this type of fraud. “All the more reason society should open up an honest, judgment-free conversation about romance scams.”

Now read:
“The worst match of my life”; user narrates the dangers of using dating apps
“Environmentalists” arrive on dating apps; swipe right for the environment
Valentine’s Day: how to reach the ideal person on dating apps
Google saves a woman from a dangerous date; tiktoker alert for dangers in dating apps