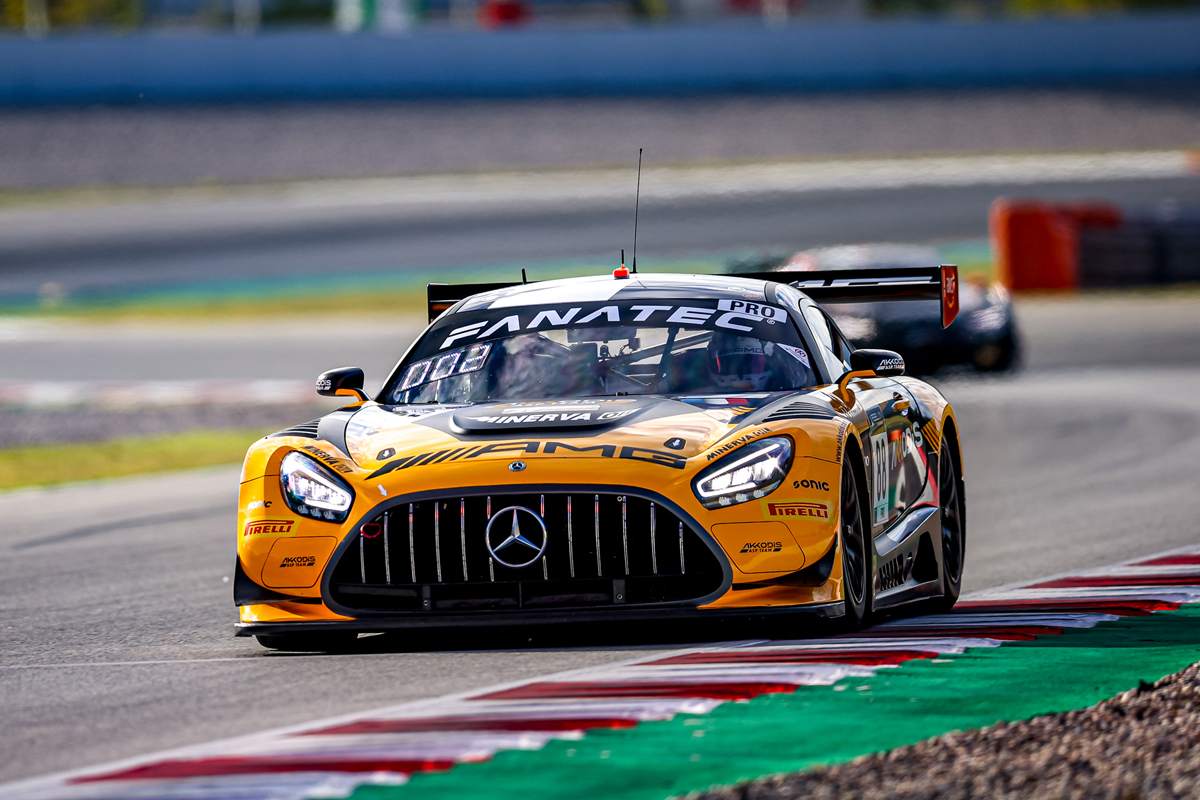 The victory of the #54 Porsche of Dinamic Motorsport over the #71 Ferrari has allowed the #88 Mercedes drivers to be the new champions, despite the fact that Dani Juncadella and his teammates could not get past fifth place.

The victory of the Porsche #54 of Dinamic Motorsport in the 3 Hours of Barcelona It has been key in the resolution of the title, since the second place of the #71 Ferrari has made the attempts of Antonio Fuoco and his companions -of circumstances- insufficient to catch up with the leader. With the fifth place finish of the #88 Mercedes, Raffaele Marciello, the Spanish Dani Juncadella and Jules Gounon are the new champions.

Alessandro Pier Guidi asserted his pole position and after a great start, he escaped from the group during the first stint. The Italian completed his stint with an eight-second lead over Jack Aitken’s #63 Lamborghini. Pier Guidi’s pace could not be replicated by his teammate Alessio Rovera in the second stint. In fact, Albert Costas managed to position himself with the #63 in the wake of the leader when the halfway point of the race was crossed.

The fight in the lead between the Porsche #54, the Ferrari #71 and the Lamborghini #63 has drawn different resolutions of the championship

Albert Costa managed to take the lead of the race before entering the pitsbut the strategy of Emil Frey Racing and Iron Lynx did not work and what until then had been a duel of two became a battle of three thanks to the early stop of the #54 Porsche. Dinamic Motorsport’s GT3 took the lead with an hour to gowhile behind the Mercedes #88, sixth in the first two thirds of the race after the good start of Dani Juncadella, climbed to fifth place.

In the absence of 40 minutes the Safety Car appeared due to the mishap of the Iron Dames #83 Ferrari, which also left the girls in the team without the Gold Cup title. With the leaders back together, Matteo Cairolli signed a great highlight and managed his advantage until the penultimate lap, in which he made a mistake that still gave Antonio Fuoco wings. Nevertheless, the driver of the Ferrari #71 could not beat his compatriot.

The #54 Porsche crossed the finish line in first position, closely followed by the #71 Ferrari. For its part, the #63 Lamborghini crossed the finish line in third position, with the #32 Audi right behind it. In a more or less calm end of the race after receiving pressure from the #46 Audi for a few moments, the #88 Mercedes in the hands of Raffaele Marciello saw the checkered flag in fifth place.

A result that, together with the second place of the #71 Ferrari, was enough for the Akkodis-ASP drivers to win the title. Thus, Raffaele Marciello, Dani Juncadella and Jules Gounon took the title, success that in the case of Marciello is added to his victory in the combined classification of the GT World Challenge Europe. For its part, Juncadella Pons achieves another great triumph in a magical year.

The rest of the champions

While Akkodis-ASP also celebrated the team title, the end of the 3 Hours of Barcelona defined the rest of the remaining champions. The WRT team scored the overall Silver Cup team title thanks to the partial triumph in Catalonia of Thomas Neubauer, Benjamin Goethe and Jean-Baptiste Simmenauer. For its part, the Gold Cup title has gone to Oliver Millroy, Frederik Schandorff and Brendan Iribe in a dramatic ending.

For its part, the honors in the Pro-Am Cup have been really spread. The SPS Automotive team scored the class victory in the 3 Hours of Barcelona, ​​achieving the Endurance Cup team title in this category. Nevertheless, the drivers’ crown went to Louis Machiels, Andrea Bertolini and Stefano Costantini, drivers of the Ferrari #52. For his part, the absolute Pro-Am title of the GTWC Europe has been for Miguel Ramos with the McLaren #188.