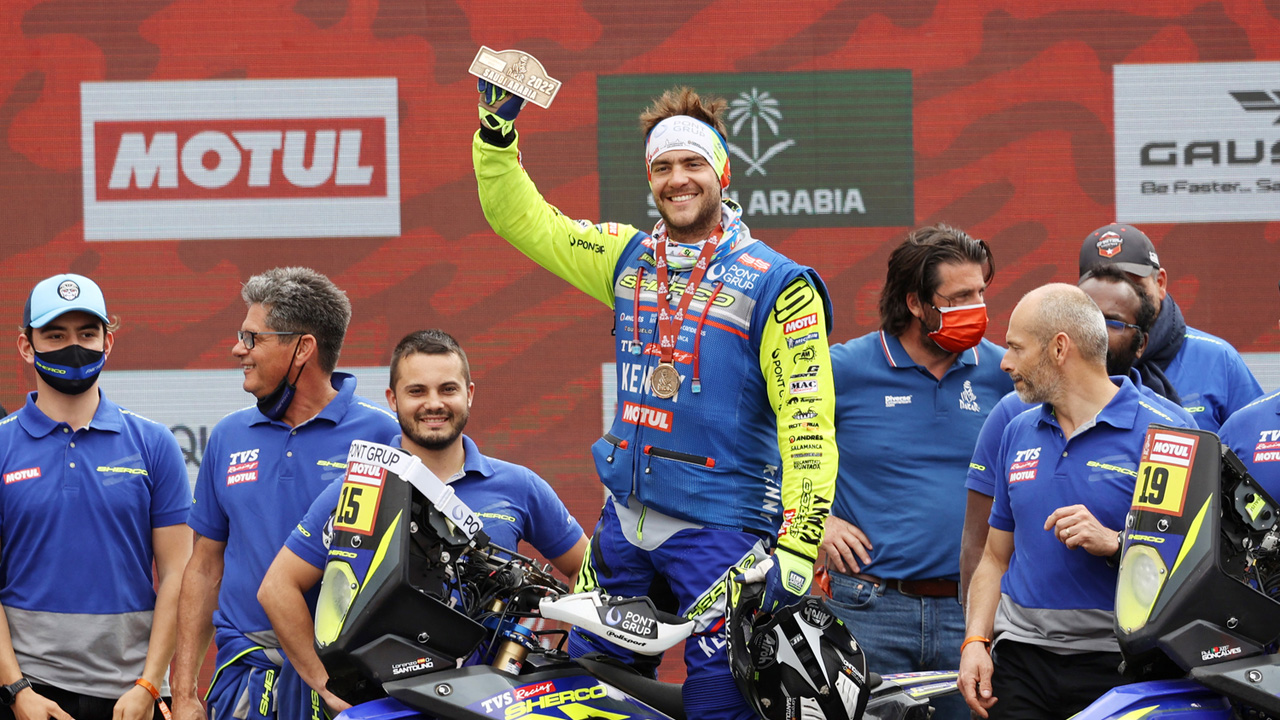 The 44th edition of the Dakar Rally has not given any ‘Touareg’ to the ‘Spanish Navy’, although it is true that the Catalan firm GasGas has managed to win the rally at the hands of Sam Sunderland. The ‘top 5’ of Joan Barreda, the two stage victories of Carlos Sainz with the new Audi RS Q e-tron, the good work of Lorenzo Santolino or the spectacular debut of Laia Sanz in the car category offer enough reasons to smile. With the mouth bigger or smaller, satisfaction has reigned among our team as it passed through the final podium of the Dakar in Jeddah.

Joan Barred He was fourth in the last special of the Dakar, endorsing the fifth place in the motorcycle general: «The result of this Dakar is a fifth place with a broken collarbone from a week ago and after having lost 40 minutes in a ‘waypoint’ the first day. I stay with the mentality that I have had throughout the rally, this ambition despite the problems. Don’t throw in the towel and go all the way. Then in the race things go well or not so well, but the important thing for me has been to be able to demonstrate all this work. We have been working for the Dakar for seven months, now it is time to rest a bit and then we will think about the objectives, being clear that the ambition and motivation have to be 100%. In this Dakar, every day that I have gotten on the bike I have had unique sensations»

For its part, lorenzo santolino He has been left at the gates of the ‘top 10’, weighed down by the change of engine and the sanction he received: «I’m glad I fought for the ‘top 10’ until the last day. I leave with a good feeling of having done my job well, of having given my best and without crashing. And with good feelings on the bike. It is clear that there are still things to improve, things to work on, but I am happy and satisfied to be able to reach the end, even if the conditions were not optimal. I can only thank Sherco for bringing this new bike to the Dakar. We all know that there are still many things to prove. The important thing is to know the areas in which to work to start doing it for the Dakar 2023»

Sandra Gomez has successfully completed her first Dakar, also climbing to the podium in the women’s category: «Today has been a full-fledged enduro in which there were even cambers. I was very concentrated and at a good pace. During the return to camp, I have been reviewing everything that has happened to me in the last three months. I remember a lot of all the people who have helped me. Above all, economically. It’s amazing what it costs everything to get here, but we have reached the goal. I feel very grateful. I have given everything I had and I think we have done well. We have only had two falls and they have not been serious. The bike has been perfect. I’d like to come back next year, so let’s work on it».

Carlos Sainz He has not managed to enter the ‘top 10’ of the general classification, but the sensations have not been bad for the man from Madrid: «I think it is to be satisfied this first appearance of the car. The first week we had some youth problems, but they were solved and this second week, the truth is that everything has gone much better. I am happy because in the dunes we have gone really well. The car has held up well in all circumstances and on all terrains. Regardless of winning stages or not, the important thing is to see the pace of the car in general and I think the pace we had. A series of things have to be improved and the team already knows it. Now we will prepare as best we can for next year’s Dakar.”

Read:  Sneak peek of the DS 5 Crossback 2024, a new premium compact SUV on the way

Laia Sanz’s debut in the car category could not have been more promising. Position 23 and very good feelings in a race from less to more with the MINI JCW Rally: «Some days we have had a good rhythm, but it has conditioned us a lot the first week and starting so far behind. If it had not been so, we would have finished higher in the general. Despite this, we know that we can do better, so we are already thinking about 2023. The goal was to learn and I think we have done it. We have learned a lot and a thousand things have happened to us from which we have drawn positive readings. next year more and better».

Nani Rome He has fallen far short of his rightful places for talent and pace with the BRX Hunter T1+. However, the Catalan takes the positive side of a tough Dakar: «I am proud to have supported the team and to have worked very hard in recent months. to achieve the proper development of this BRX Hunter T1+. I think it is a very competitive car. I want to thank Podrive and the Bahrain Raid Xtreme team, but especially to my engineer and all my mechanics. The World Championship has just started and I am looking forward to getting back in the car and achieving a better result.”

Nasser Al-Attiyah enhances his career with his fourth Dakar

Gerard Farrés started the last day at the head of the T4 category, but as an Austin Jones backpacker and under team orders, he has stepped up to let his leader win. Of course, he has done it with great elegance: «We had a problem in the last kilometer and we had to slow down. We have tried to solve it as soon as possible to avoid any scare. At the end, our goal is to work for the team, with that idea we started this Dakar. I am very excited to be back on the podium after several tough years.. I think we’ve done a great job and it’s something we deserved.”

God of War Ragnarök already has a classification in South Korea and everything seems to indicate that we will be able to play it...