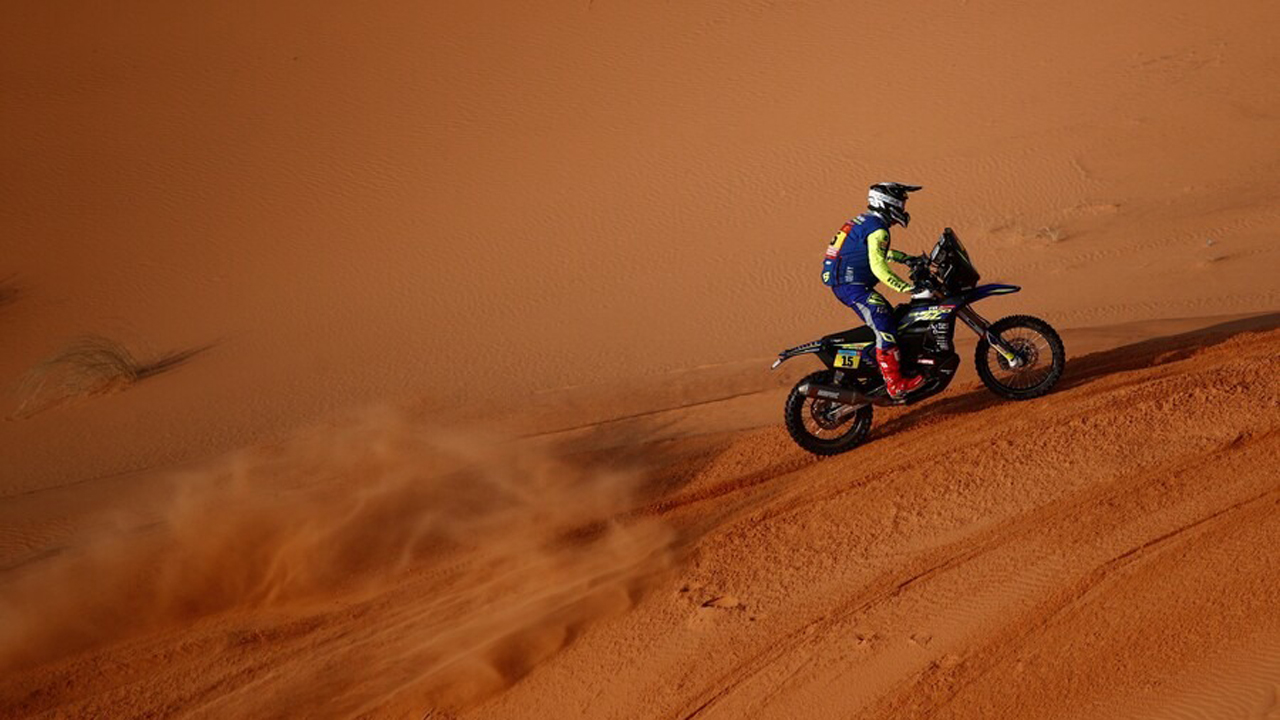 The first week of the Dakar has concluded after the dispute of the prologue and the first six stages. The Spanish runners will live the rest day with the hope that the second part of the test will be full of good results that allow to improve the positions that they currently occupy in the general. Lorenzo Santolino continues to show great regularity and comes out unscathed from today’s complicated stage. Joan Barreda fights against the pain caused by a fissure in the left clavicle after yesterday’s crash. Laia Sanz and Cristina Gutiérrez close the week with a great performance.

Lorenzo Santolino He saved the stage for another day without major failures, beyond a small navigation error at kilometer 51. This is relevant on days like today, where surviving the competition is a success: «I have been cautious. The bike was moving a lot, I tried to go parallel to the tracks to try to get out of the ruts of the cars. In the first ‘refueling’ of kilometer 101 they stopped the stage. The truth is that it is very dangerous. There are many areas with stone that the cars have left very destroyed. Also, you ride at a medium or medium / high speed and on such rough terrain, staying on top of the bike is a lottery. Above all, when there are areas that are a bit soft, without becoming sandy, that the cars go to look for the hard areas, and Although they look like soft ruts, you are actually looking at the sand, but underneath are all the rocks and hard steps. It’s super dangerous».

Joan Barreda suffered today on the bike. The injury caused by yesterday’s fall, a fissure in his left clavicle, causes him a lot of pain. Now the objective is none other than to finish the race: «The objective today was to try to continue in the race after yesterday’s crash. With a lot of pain during these 100 kilometers, especially in the parts of stones and sand, where you had to brake to pass the potholes. I have suffered enough. We are going to see how the injury evolves. The goal is for it not to get worse. If it continues like this, I hope I can handle the situation to continue in the race. The race has been complicated since we made the mistake on the first day, because then you try to push to recover time and in the end comes the fall and the bad luck of hurting my shoulder. Now we are going to try to reach the finish line. Today I was able to finish the first 100 kilometers, but I don’t know if continuing the stage would have been feasible. My shoulder hurt a lot in some movements on the bike».

Sandra Gomez He continues to make progress in his first Dakar Rally appearance. The Madrid driver was not at all happy with the neutralization of the race, in her opinion unnecessary, since that limits the possibility of closing the gap: «They’ve cut us off again, they say it’s dangerous. I don’t understand anything, I don’t know where the danger is. If we come by a track where there were many stones, destroyed by the passage of cars and trucks yesterday, but I think that each one should set their speed limit. The only thing that happened is that you couldn’t go 200 km / h, you had to go 150. In my opinion, of course you could do the special, but they go very fast, and you have to go slower. Today we had 400 km of special, we have only done 100. I’m a bit angry, really. So far, I can assure you that it is not the toughest race in the world, and I see that at the least that there is something that does not suit them, they cancel the organization. The truth is that there is a little strange atmosphere ».

Nani Rome has completed a positive day among the best of the day. Perfect exercise on the BRX Hunter T1 + to get back on track: “It was good to be honest. We have had no mistakes because we have ridden safely through the rocky areas, thus avoiding punctures. We are constantly improving the car, but it is very pleasant to drive. We really picked up a good speed throughout the stage, but we have the second week ahead and it will be much more difficult than the first as you now know part of the terrain. It will not be easy for anyone, but we are confident that we can do it well.

Laia sanz has shone in the sixth stage of this Dakar. His great performance today, finishing 15 minutes and 42 seconds behind the first winner of the special, allows him to climb to 26th place in the general classification: «We were on pace to finish 15th or 16th, but towards the end we slipped a wheel and it took us a little longer to start due to the problems that we are dragging every day with the hydraulic lift.. Even so, I am happy and very satisfied. It has been a very good day. There is a lot of difference between being able to start in position 31, as has been the case today, or do it in 112. We have even had some dust, but we have enjoyed the stage and we have had a good rhythm all day. Maurizio Gerini has sailed very well ».

Carlos Sainz has suffered again in the sixth stage. The weak point of the Audi RS Q e-tron continues to give the Madrid driver problems. On this occasion, the ‘Matador’ gave up more than half an hour because of the shock absorber: «Once again we have suffered a delay due to mechanical problems. Before the passage control at kilometer 81 we had a problem with a shock absorber. Later a wheel has forced us to stop and repair. As it happened yesterday, Stéphane Peterhansel has stopped to help us. I have to thank Stéphane once again for his help, he saved us today.

Sunderland and Al-Attiyah arrive as leaders on the rest day

Cristina Gutierrez It has been another of our best representatives on this day, closing a magnificent performance in the T3 category. He finished the special in second position and completed the provisional podium of the general classification: «We are very happy with the performance of the car! We have our super mechanics to thank, who worked tirelessly to get my car ready for the stage. It was the stage we needed, we just had to take care of racing. We had some navigation problem and we lost about ten minutes. Despite everything we are happy, because we continue in the fight for the podium».