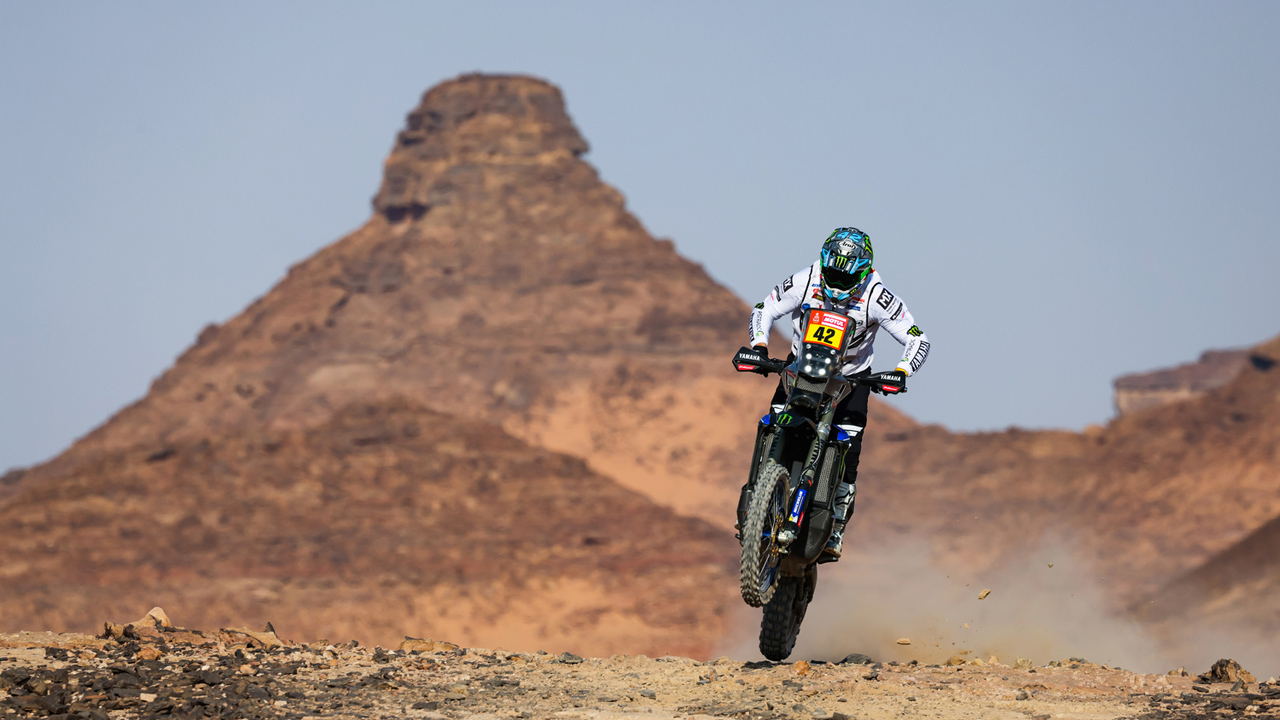 The Dakar 2022 is a little closer to its end after the dispute of the tenth stage and the motorcycle category is getting more and more interesting. The differences between the main contenders for the title are so small that another day there are changes in all the positions of the ‘top 5’. Adrien Van Beveren is the new leader of the general classification, followed by Pablo Quintanilla at a distance of 5 minutes and 15 seconds, despite his sanction. Sam Sunderland is third overall at 5 minutes and 59 seconds. Much more stable is the general in cars. Nasser Al-Attiyah continues to maintain a good time buffer despite a five-minute penalty that were imposed on him yesterday.

Toby Price He has achieved his first victory in this edition on the day that his teammate, Kevin Benavides, broke the engine. The Australian has overcome navigation problems to sign a great performance: “It was a very good day. I have made a small mistake, but I have tried to follow the roadbook as much as possible, praying that perhaps one of our rivals in front would make a mistake. There are still two days left and anything can happen, although open court never allows to get a good average. I am in good shape and that is the most important thing. I hope I can have a good day tomorrow. The race is very close in the first places and I think that is what everyone likes, so great.

Adrien van beveren he finished fourth -beyond Barreda’s sanction- 3 minutes and 35 seconds from the time set by Price: «I have done the stage at my own pace, trying not to lose myself. In the last point he had calculated that everything was shaping up well for tomorrow, because he would be a little behind. But it seems that they have applied the team strategy. The problem is that tomorrow we have sand and when you leave your mark for others, you allow them to buy a lot of time. I know that KTM, GasGas and Husqvarna are going to race as one team and that Honda has four fast riders. Andrew Short has fared worse than me today, so he won’t be able to help me. I’m left alone and everything will depend on me. Maybe I’m the only one without a strategy, but I may still make our dream come true. “

Sam sunderland He was not entirely satisfied when he reached the finish line. A navigation error prevented him from signing a better performance: «Mason Klein had a serious crash this morning and I stopped to help him. Later I have made a mistake at the entrance of a canyon and I have taken the wrong course, but I have realized it and I have rectified. I feel a bit frustrated, but at least it consoles me to know that tomorrow I will start in a good position. When the race is so close, nobody knows if it is better to attack or play it safe and, in the end, we are doing what seems best to us. I am happy. I have prepared well this year and I think it shows. I’ve been at the head of the race for seven days. I just have to give it all tomorrow».

Matthias walkner he lost the overall lead after finishing the tenth stage in twenty-seventh position. The Austrian pilot has been the victim of a navigation error, probably the most important of all the favorites have made, which has caused him to lose almost 16 minutes: «At the beginning, those who were in front of me were lost and I was able to cut timebut in the end the sun was too high and the slopes had little contrast so it didn’t look good. I have made a navigation error that has lost me several minutes. That’s the way things are, sometimes everything smiles at you and other times, it doesn’t. But we still have two long days left.

Stéphane Peterhansel the victory of the tenth stage in the car category has been scored. The Frenchman is already thinking about next year’s edition: «It was one of the first clear stages, with no shock absorber problems, no punctures and no navigation problems.. Since the second week, we haven’t had any serious technical problems again, so we made progress and enjoyed driving. I’m not really a stage collector, but so every Audi driver has won one and that’s a very positive thing.. With Carlos Sainz for the first time an electric car won a Dakar special. It has been important. Now we confirm those results. It is encouraging, especially after a difficult rally start. We have to win in 2023, there is no other».

Sebastien loeb has done a good job in this stage, however, it did not allow him to cut more than 1 minute and 25 seconds to Nasser Al-Attiyah in the general: «In general, it has been a good day. We have only circled for a minute and a half in a ‘waypoint’. Otherwise we have made good progress. We haven’t managed to get Nasser out for long at the finish line, but it’s normal. It was a stage in which we were going very fast and thus it is not possible to achieve large differences in time. As I said from the beginning, all I want is to do the best I can every day and we will see what we achieve that way. As for the results, even stepping hard we find it difficult to buy time; Audis are always faster and it is difficult to keep up with them».

Nasser Al Attiyah He remains focused on completing days without significant errors. For now, the strategy works perfectly: «We have finished the stage without too long escaping us, we just give Seb a minute. And tomorrow we will be in a good position at the start. We didn’t have a puncture today and we didn’t have any problems with the car. Mathieu has done the navigation very well. We are approaching the goal little by little. I have already commented that I don’t want to take risks, just keep a good pace. Finishing one minute behind Loeb in these conditions or like we did yesterday is very good. The test has not finished yet, there are still two days left and it will be difficult until the end We think about victory from day one. We do not seek to win stages ».