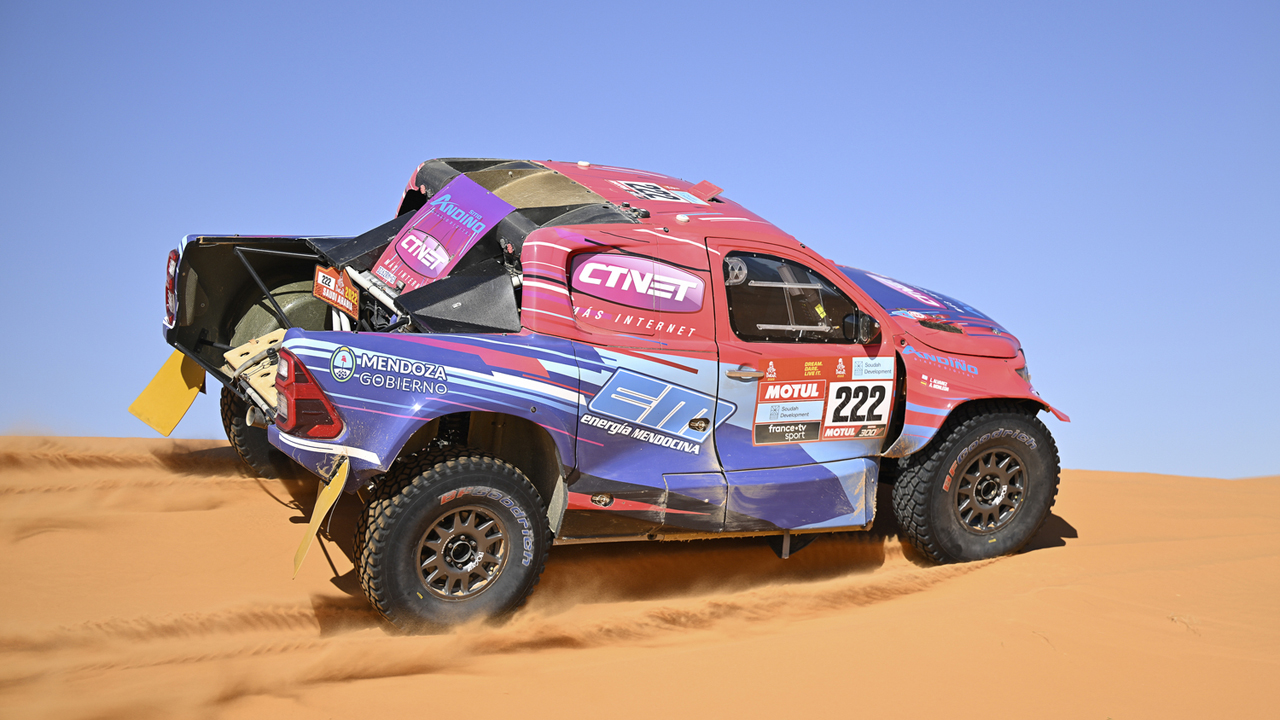 The eleventh stage of the 44th edition of the Dakar has left Sam Sunderland in the motorcycle category and Nasser Al-Attiyah in cars as favorites to win the title. Sunderland stormed into the overall lead after a masterful performance today. His immediate pursuer, the Chilean Pablo Quintanilla, was at a distance of 6 minutes and 52 seconds. It was enough for Al-Attiyah not to fail. Not only has it not done so, but it has consolidated itself even more, if possible, in a position it has held since the beginning of the competition. Despite all your efforts, Sébastien Loeb lost time again today after receiving a five-minute penalty.

sam sunderland He finished the special in second place, just 4 seconds behind the day’s winner, the Argentinian Kevin Benavides: «The race ain’t over ’til the checkered flag waves. Navigation plays a very prominent role in this test, so I’m going to keep concentrating and giving one hundred percent, which is what the others are going to do. Everyone has worked very hard, but this year the times are very tight. I’m going to try to do a clean stage tomorrow and I hope it helps. I wasn’t the only one who took today’s stage in stride to start tomorrow in a good position, but many people gave it their all without thinking twice. Maybe my strategy was not correct. For now everything is going well and we will try to keep it that way tomorrow».

Pablo Quintanilla He finished sixth, 7 minutes and 40 seconds off the best time of the day, after losing time at one of the checkpoints. The result allows him to maintain second place overall: «It was an important day that in the end was very hard, I think the hardest stage of this Dakar. There were many dunes at the beginning, very soft, some difficult to cross. In the end I did a good special, although I wasted time looking for a ‘waypoint’. It was complicated and I’ve been attacking all day. I’m happy with my performance since the rest day. We have worked very well and I have to thank the team for everything they have done. To stay focused until the end.”

Adrien Van Beveren He experienced the biggest disappointment of the day by losing the lead and almost all his options for the title. The French paid to open the track and ended up losing a lot of time by having problems with navigation. Right now, he is 15 and a half minutes from the head: «At kilometer 4, I looked for a ‘waypoint’ that didn’t come out open and I’m not sure it was the right place. There I lost a lot of time, I got nervous and I went out for everything. I got a little warm so I relaxed and almost ran out of gas. The setback has been hard, but I have really given everything. Those who go before me have not forgivenBut I don’t regret anything.”

Alexander Giroud is another pilot who caresses the title with his fingers. He leads the general quads with an advantage of 2 hours, 41 minutes and 24 seconds over the Argentine Francisco Moreno. The Frenchman was very excited about the possibility of being champion tomorrow and making history: «Now we have to take the quad to the finish line and above all not make mistakes. I have been listening to the quad, pampering it so that it reaches the end. In the Dakar you talk a lot with your vehicle, from the first day, but then you never answer. It is very important because in the quad category no Frenchman has yet won, and also my father was the first to finish the Dakar in quads 25 years ago.».

Read:  Toyota Sequoia 2023, a huge and technological SUV that succumbs to electrification

Lucio Alvarez He was one of the stars of the penultimate stage, finishing second alongside Armand Monleón: «I am very satisfied with how the special went, for having fought face to face with the official drivers and factory cars. In addition, we have managed to reach the finish line after a breakdown that has left us without second and third gear. We have had to pull the clutch use on the dunes and broken tracks in the last 40 kilometers. I think we’ve done a great job keeping Sainz and Loeb on the pulse. I would have liked to win the special, but I am satisfied with what I have achieved. It was a stage that I like and we really enjoyed it. We have fought against all the terrains that you can find in the Dakar».

Nasser Al-Attiyah He has managed to overcome the penultimate hurdle towards his fourth ‘Touareg’ and is now only one stage away from winning a new Dakar: «It has been a very difficult stage. Losing four minutes with Seb, before his penalty, is nothing. We are on the right track, tomorrow the stage is short and we have to keep up the pace. It is very important to win the Dakar. We have been in the lead from the beginning and we have been working for this victory. The Dakar is not easy, but we have a lot of experience and it is not necessary to win every day. We bagged the first stage by making a good time and then went day by day driving the advantage until the rest day. Now it’s time to be careful. You have to be very focused until you cross the finish line».

sebastien loeb He had been second in the first instance, but a five-minute penalty has ruined his stage. In fact, the Frenchman finished behind Al-Attiyah: «We’ve had a good special, attacking from start to finish without making any mistakes. We did what we could. The time set is good, but you can’t compete with the Audis when they’re going all out. They are very fast since several days. We are where we can be. The cut minutes did not change anything, with the sanction less. I keep doing my career and enjoying with Fabian. Coming into the rally, we didn’t know where we were going to finish, so second place isn’t bad. It is seen that the car is up to the task and that is great. We lost 37 minutes on the second day due to a mechanical problem, but afterwards we did some good specials”.