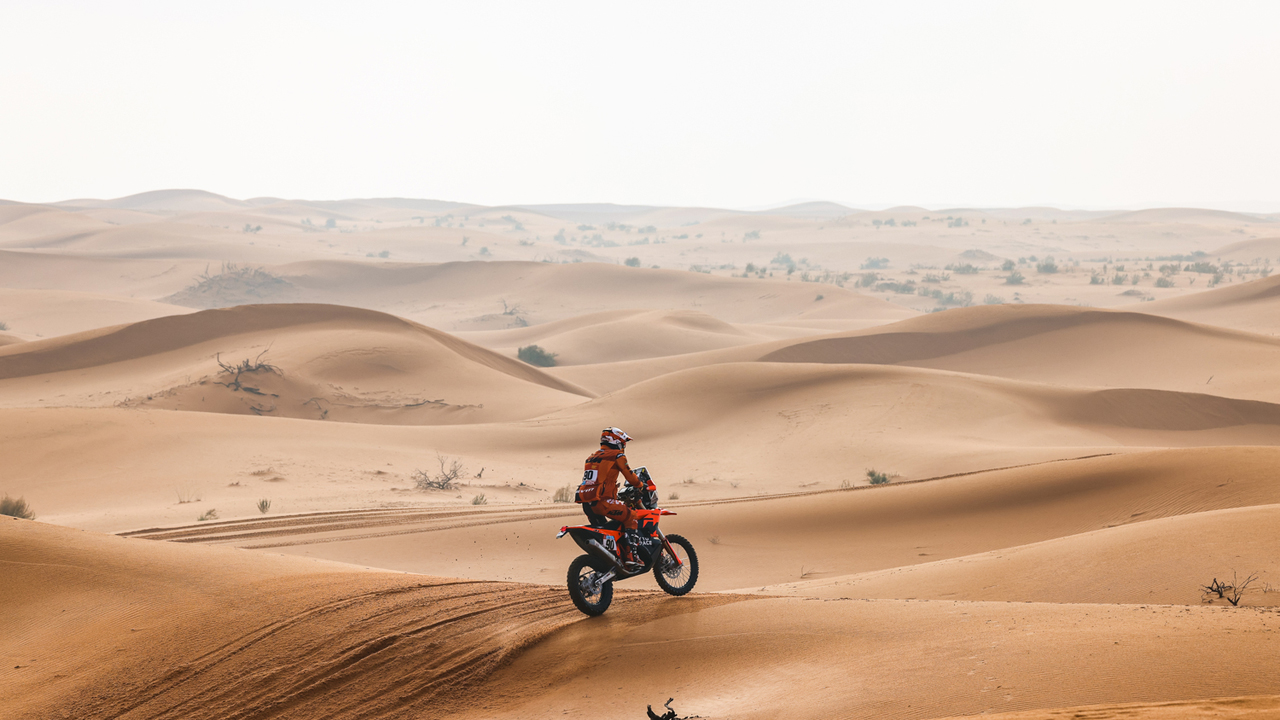 The fifth stage of Dakar 2022 has left us the first victories for two young promises of the rally, Danilo Petrucci and Henk Lategan. The motorcycle day has been especially turbulent in the motorcycle category. First, a sandstorm forced the helicopters to land, which led to the organization of the test to stop the stage. Subsequently, Toby Price, who had set the best time of the day, received a six-minute penalty for speeding and thereby lost the victory of the special. Everything has developed more normally in cars, with the first of the general, Nasser Al-Attiyah and Sébastien Loeb riding together much of the tour.

Danilo petrucci He took the stage 5 victory on motorcycles after a six-minute penalty imposed on Australian Toby Price for speeding. This is the Italian’s first participation in the Dakar, so he arrived in Saudi Arabia without experience in raids: “I’m really enjoying it. I am here to learn. The second day I had a problem with the bike. He stopped and that left me out of the classification, but I think it’s better because I have no pressure. I lack a lot of experience in navigation. There are some notes that I don’t understand much, sometimes it is difficult for me to know where to go and I have to look at the roadbook a lot, but I am happy to have achieved my first victory. It is very difficult to buy time and very easy to lose it. I did not expect to be in the top positions so today I am going to enjoy it. The goal is to finish the race».

Ross Branch the day ended as the second best of the day, just two seconds from the time set by Petrucci: «The rally is taking me long, with so many ups and downs and big navigation errors. I am trying to straighten the course. Today I have been very lucky in one of the ‘waypoints’, because I have been able to find it very quickly while others have lost a lot of time. I am satisfied with my day and for having reached the goal in one piece. My position in the general classification could be better, but if I manage to close the gap every day in the end I will not be badly positioned. My colleagues and I look forward to the arrival of the second week. Adrien Van Beveren has done a fantastic job from the start. Andrew Short, meanwhile, has had a bad couple of days at first. But the three of us are whole, the bikes are responding well and our desire is to reach the final goal. It is important after all efforts made by the team. I sincerely hope that is the case.

Luciano Benavides placeholder image he achieved tenth position in a stage that was not easy for him due to the complicated navigation and the lack of references: «I started fifth today so I had few lines in front of me. Navigation was quite difficultIt was not easy at all so I was attentive to the roadbook, always following my navigation. After halfway through the stage, I caught up with the two Sherco riders in front, I passed them and from then on I only had the footprint of the two Honda riders. It was practically like opening a track because in certain places there were sandstorms too and you didn’t see much. I am very happy with the work I did. I was able to keep control of the entire stage, navigate well and set a good pace. I think I have done quite well.

Henk Lategan he got the stage win in the car category, beating Sébastien Loeb by almost two minutes, despite having had some incidents since the beginning of the day. The South African has thus achieved his first victory in a Dakar special: «I still don’t believe it, nor do I really know what happened. It has been a genuinely Dakarian day. 10 kilometers from the exit, my door broke and opened while driving. Then we clicked. It has been a crazy day! We were left out of the options for the title because we lacked luck at the beginning of the rally, but we have to continue learning as we are doing now. The first thing is to continue in the rally and the next, to progress in our way of reading the terrain. We are going to continue attacking.

Sebastien loeb he had to settle for the second best time of the day, but he finished with a good feeling after having hunted down Nasser Al-Attiyah, with whom he would race to open the track during the second half of the stage. The Frenchman has cut three minutes away from the Qatari: «We caught up with Nasser and tried to overtake him by taking a different course in the dunes. We have succeeded, but it has trapped us and so on for 200 kilometers. It has been fun, we really enjoyed it. The objective was to cut three minutes because we knew anyway that we would not be able to distance ourselves from him. Today we could not aspire to more. The strategy now is to stay focused. We are on a good pace relative to Toyota. I get on well with Fabian, which is great. We are in the fight, so we won’t complain».

Mathieu Serradori was awarded third place in the special of the day. Despite hitting a tree and damaging his car, the French racer achieved a great time thanks to a good navigation job: «It has been a difficult stage. The bikes have not opened ahead so there was work to be done. The good thing is that we have not punctured even once, and that we have traveled canyons, dry riverbeds, mountains of stones. The negative side is that after the link I have lost concentration a bit and I have hit a tree, so now it is my mechanics’ turn to get to work. Loïc Minaudier has been very constant in navigation. In some places we have worked hand in hand. In fact, we have opened an important gap thanks to a good navigation stroke. The objective, for the moment, after the first bad days we had, is to sneak into the ‘top 10’. Now we are back in the battle and if there is one thing clear, it is that from here until the end we will go to the death.

Lucio Alvarez He was satisfied to achieve a result that allows him to return to the ‘top 3’ of the general classification. After finishing the stage, he took the opportunity to claim the work of his co-pilot, the Spanish Armand Monleon, on a day in which navigation was not easy: «Very satisfied with how the stage was. Today for us was the day we had to vindicate ourselves and place ourselves firmly in the top five. Things went well because we managed to place third and with a good advantage over fourth place, just over a quarter of an hour. The special was very difficult, as we had been warned. Armand did a great job and at no point did we have any doubts about where to go. And in many points it was very difficult to get it right. We were able to do well and it was a very entertaining stage, I really enjoyed it thanks to the rapport we have inside the car. With everything, it was a stage with a lot of tension».