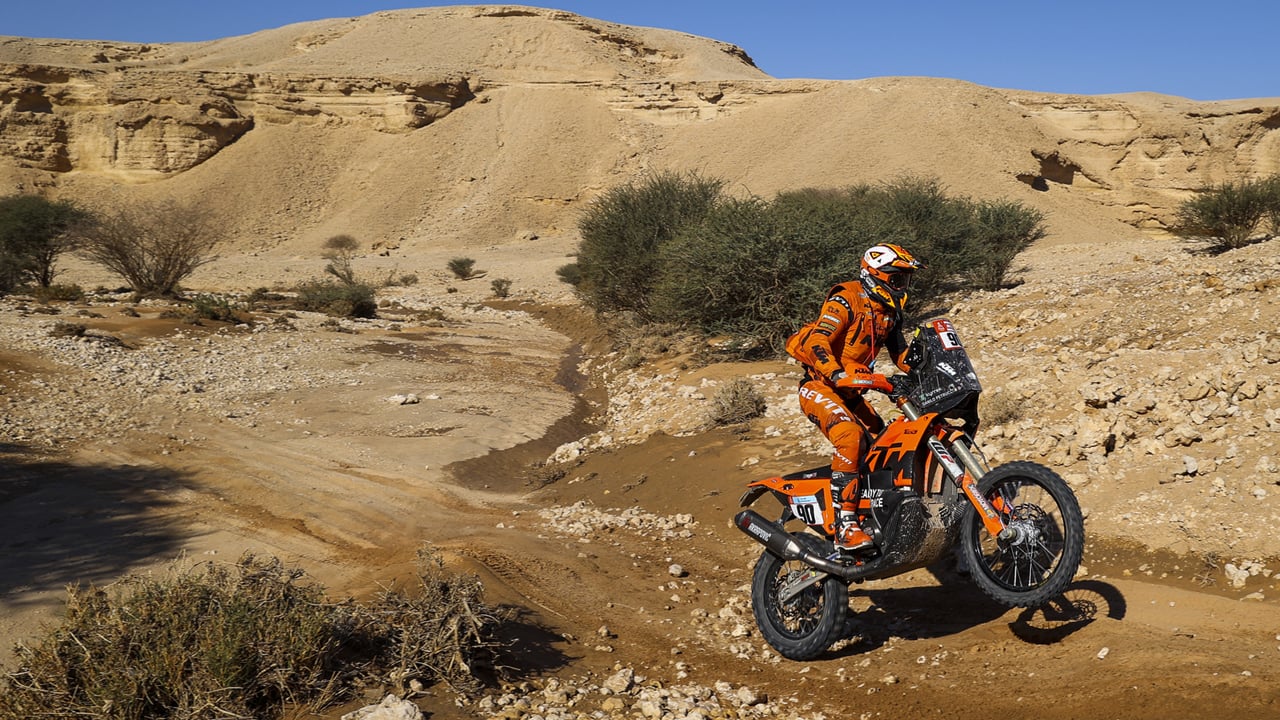 Toby Price has scored the victory in the fifth stage of the Dakar and debuts his record in this edition. The Australian KTM rider completed the loop special around the city of Riyadh in 3 hours, 19 minutes and 32 seconds, record that has helped him to overcome Danilo Petrucci by more than 4 minutes. All in all, the Italian gets his first podium in a Dakar special after losing the one won yesterday by suspension. In the fight for the ‘Touareg’, Sam Sunderland continues as leader and Joan Barreda spends almost nine minutes with the GasGas rider.

Index hide
1 Motorcycles
1.1 The ‘quietest’ riders of the first week of the Dakar

Joan Barreda had the difficult task of opening a track and soon he has paid for it. Pablo Quintanilla was quick to hunt down the man from Castellón and at kilometer 190 they were already riding together. Despite working together, the pace of the two Honda riders was slower than that set by the riders who started from behind. Daniel Sanders was one of the ‘motards’ that was favored in today’s order of departure, but before reaching kilometer 311 he suffered a puncture that ended his options to win the stage. Toby Price took over from his compatriot after starting almost outside the ‘top 30’ in the starting order, which gave the KTM rider an advantage that he did not miss.

Toby Price took the victory with 4 minutes and 14 seconds of income over Danilo Petrucci. The Italian confirmed the stage podium that he had lost the previous day due to suspension, showing his talent and quick adaptation to the specialty. Ross Branch closed the stage in third position after beating the Honda of Nacho Cornejo and Ricky Brabec. Mason Klein has stood behind both of them. on a day in which the race leaders had the stage dynamics against when going out in the lead. In fact, the British Sam Sunderland finished 12 minutes and 17 seconds behind his former teammate, in thirteenth position.

Nevertheless, Sam Sunderland remains in the lead with 2 minutes and 29 seconds of lead over Matthias Walkner, although he has lost 31 seconds to the Austrian. The overall podium remains unchanged, with Adrien Van Beveren in third position. Despite the aforementioned puncture, Daniel Sanders has managed to minimize damage and remains fourth overall ahead of Lorenzo Santolino. The Sherco rider was 21st on the stage and gave up six minutes to the leader. For its part, Joan Barreda was unable to pass from 27th position and occupies tenth place overall, 22 minutes and 58 seconds behind the leader.

The ‘quietest’ riders of the first week of the Dakar