By MatthewAugust 23, 2022No Comments9 Mins Read 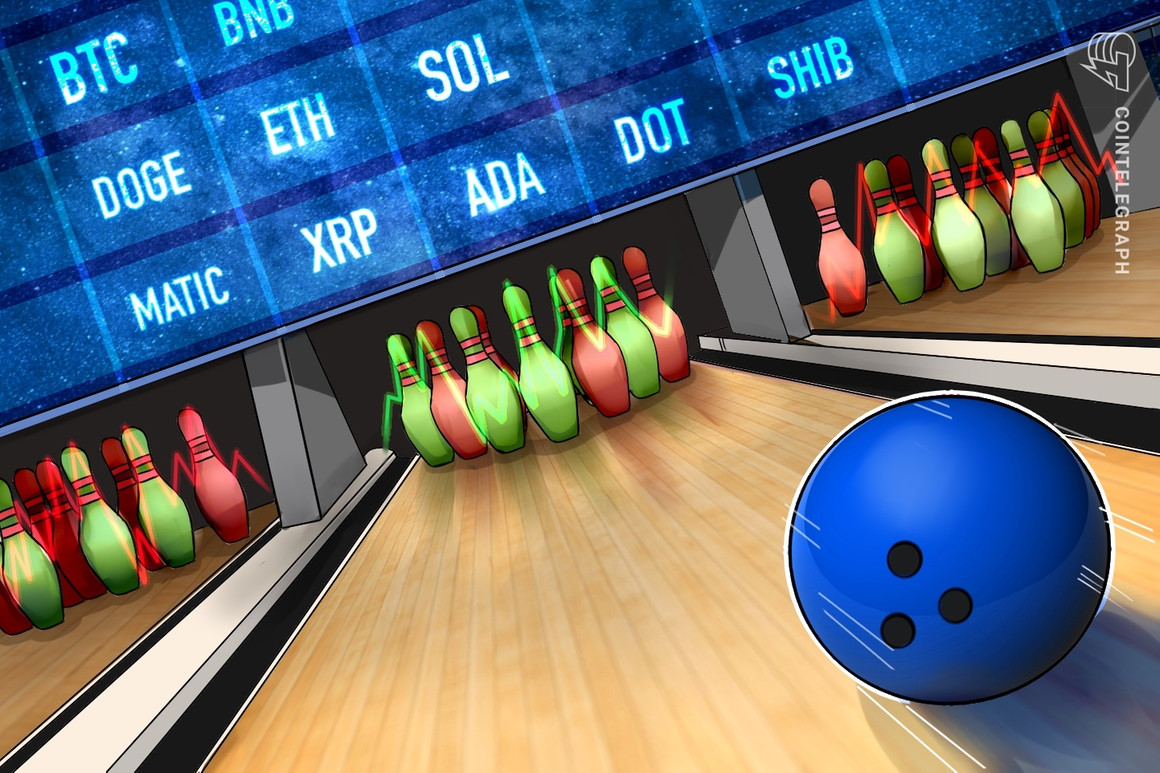 Both the European and US stock markets are in the red on August 22 as investors fear that aggressive rate hikes are not out of the question.

Another thing keeping investors on edge could be the upcoming Jackson Hole economic symposium, which is scheduled to start on August 25.. Investors are concerned that Federal Reserve Chairman Jerome Powell may elaborate on the Fed’s aggressive stance and plans for future interest rate hikes.

This macro uncertainty has kept institutional investors away from the cryptocurrency markets. Data from CoinShares showed that cryptocurrency investment products saw weekly volumes of $1 billion, which is 55% less than the annual average.

On-chain analytics resource Material Indicators said that Bitcoin (BTC) has not broken below the July lows. This suggests that the bear market rally is not over yet. However, the buyers will have to push the price above the 200-week moving average near $23,000 to take the lead.

Could Bitcoin and most of the major altcoins come back strong in the coming days and what are the critical levels to watch? Let’s study the charts of the top 10 cryptocurrencies to find out.

Buyers defended the support line of the ascending channel on Aug 19 and started a bounce, but the rally stalled at $21,800. This suggests that the bears are posing a strong challenge near the moving averages.

One small silver lining is that the long tail of the Aug 22 candlestick shows that the bulls are trying to defend the support line vigorously. If the bulls push the price above $21,800, the BTC/USDT pair could rally to the 20-day EMA ($22,725).

If the price breaks below this resistance, it will suggest that sentiment has turned negative and traders are selling on rallies.. That could increase the possibility of a break below the channel. If this happens, the selling momentum could pick up and the pair could drop towards the June 18 low of $17.622.

On the contrary, if the buyers push the price above the 20-day EMA, it will be understood that the pair may extend its stay inside the channel for a few more days. The bulls will then try to push the price towards the resistance line of the channel.

Ether (ETH) dipped below the 20-day EMA ($1,718) and the breakout level of $1,700 on Aug. 19, suggesting that traders who had bought at lower levels were exiting their positions.

The bulls attempted to cap the decline at the 50-day SMA ($1,549), but the weak bounce that ensued suggests a lack of aggressive buying at that level.. This increases the probability of a break below the support.

If this happens and the ETH/USDT pair breaks below $1,500, the selling could intensify as the bulls might wait for the price to hit the next strong support before buying back. Therefore, the pair could drop to $1,280.

On the contrary, If the price bounces off the current level and rises above the 20-day EMA, traders who did not buy at the 50-day SMA might buy aggressively so as not to miss out on the upside move. This could push the price towards $2,000.

Binance Coin (BNB) rebound from the strong support at $275 is facing stiff resistance at the 20-day EMA ($301), but a small silver lining is that the bulls have not given ground to the sellers. This indicates that buyers expect the recovery to continue.

If the price breaks above the 20-day EMA, the BNB/USDT pair could rally to the overhead resistance of $338. This is an important level to watch out for, as if it breaks and closes above it, the bullish inverse head and shoulders pattern will complete. This setup has a pattern target objective of $493.

Conversely, if the price turns down from the current level and breaks below $275, the pair will complete a short-term head and shoulders pattern. This could start a decline towards the pattern target of $212.

It is best to wait for either pattern to complete before establishing a position because setups tend to break more often than not.

Ripple (XRP) remains stuck inside the range between $0.30 and $0.39. The bulls are attempting to defend the $0.33 support but are facing stiff resistance at the higher levels.

If the price turns down and breaks below $0.33, the probability of it falling to $0.30 increases. This level has previously acted as strong support; therefore, traders can buy the dip, hoping for a rally to $0.39.

Another possibility is that the price will rebound from $0.33 and break above the moving averages. If that happens, the XRP/USDT pair can rally to the tough overhead resistance of $0.39.

Read:  Elon Musk reveals his terrible morning habit and how he plans to change it to improve his life – FayerWayer

It is difficult to predict the direction of a range breakout. Therefore, traders can wait for the breakout to occur before establishing new positions.

Cardano (ADA) dipped below the 50-day SMA ($0.49) on Aug. 19, indicating that bears have the upper hand.. Buyers tried to start a relief rally on August 20, but the weak bounce shows a lack of demand at higher levels.

The bears will now try to sink the price to the strong support at $0.40. This is an important level to watch because the bulls have successfully defended the level since May 12. The break and close below this support could signal the start of the next leg of the downtrend.

Conversely, if the price bounces off $0.40, the buyers will try to push the ADA/USDT pair above the moving averages. If they succeed, the pair could rally to the downtrend line.

Solana (SOL) broke below the moving averages on Aug 19, which indicates that the bears have the upper hand in the short term. The sellers will try to sink the price to the immediate support of $32.

If the price rebounds from $32, the bulls will try to push the SOL/USDT pair above the moving averages. If they succeed, the pair could rally towards the overhead resistance of $48.

On the contrary, If the price drops below $32, the pair could drop to the crucial support at $26. The bulls are expected to defend this level with all their might as if they fail to do so, it could signal a resumption of the downtrend.

Dogecoin (DOGE) bounced off the trend line on Aug. 20, but the bulls were unable to overcome the 20-day EMA ($0.07) hurdle. This indicates that the bears do not want to give up their edge and are selling on minor rallies.

The DOGE/USDT pair formed a Doji candlestick pattern on Aug 21, which resolved to the downside on Aug 22 and the price slipped below the trendline. If the price sustains below the trend line, the pair could continue to slide down to $0.06. This is an important level for the bulls to defend as a break below it could trigger a drop to the crucial support at $0.05.

In order to invalidate this bearish view, the bulls will have to push and sustain the price above the 20-day EMA. If that happens, it will suggest that the bears aggressively bought the dip below the trendline. That could open the doors to a possible rally to the overhead resistance of $0.08.

POlkadot (DOT) broke below the 50-day SMA ($7.78) on Aug. 19, indicating a lack of buying support from the bulls.. The bears will now try to sink the price to the strong support at $6.

When price is trading in a wide range, traders often buy the bounce off support by holding a tight stop-loss. This improves the risk-reward ratio. Therefore, the probability of a bounce off the $6 support is high. If this happens, the DOT/USDT pair could remain in a range between $6 and $10 for some more time.

The next trending move could start on a break below $6 or a break above $10. If the support at $6 gives way, the pair could start the next leg of the downtrend.

Shiba Inu (SHIB) is witnessing a struggle near the 20-day EMA ($0.000013) with the bulls and bears vying for supremacy. The buyers are trying to push the price above the resistance at $0.000014, but the bears have held their position.

The 20-day EMA has flattened out and the RSI is close to the midpoint, indicating a balance between supply and demand. This balance could tip in favor of the bulls if the price breaks above $0.000014. If this happens, the SHIB/USDT pair could rally to the tough overhead resistance of USDU 0.000018.

Polygon (MATIC) has been consolidating in a wide range between $0.75 and $1 for the past few days. The bulls bought the dip to range support, but the bounce is facing stiff resistance from the bears at higher levels.

If the bulls push the price above the 20-day EMA ($0.86), the MATIC/USDT pair might attempt a rally to the overhead resistance of $1, where the bears are likely to mount a strong defense.. If the price breaks below this resistance, the pair could extend its stay in the range for some time.

Conversely, if the price turns down from the current level and breaks below $0.75, the bears will be back in command. In that case, the pair could drop to the next support at $0.63.

The views and opinions expressed here are solely those of the author and do not necessarily reflect the views of Cointelegraph. Every investment and trading move involves risk. You should conduct your own research when making a decision.

Market data is provided by the HitBTC exchange.