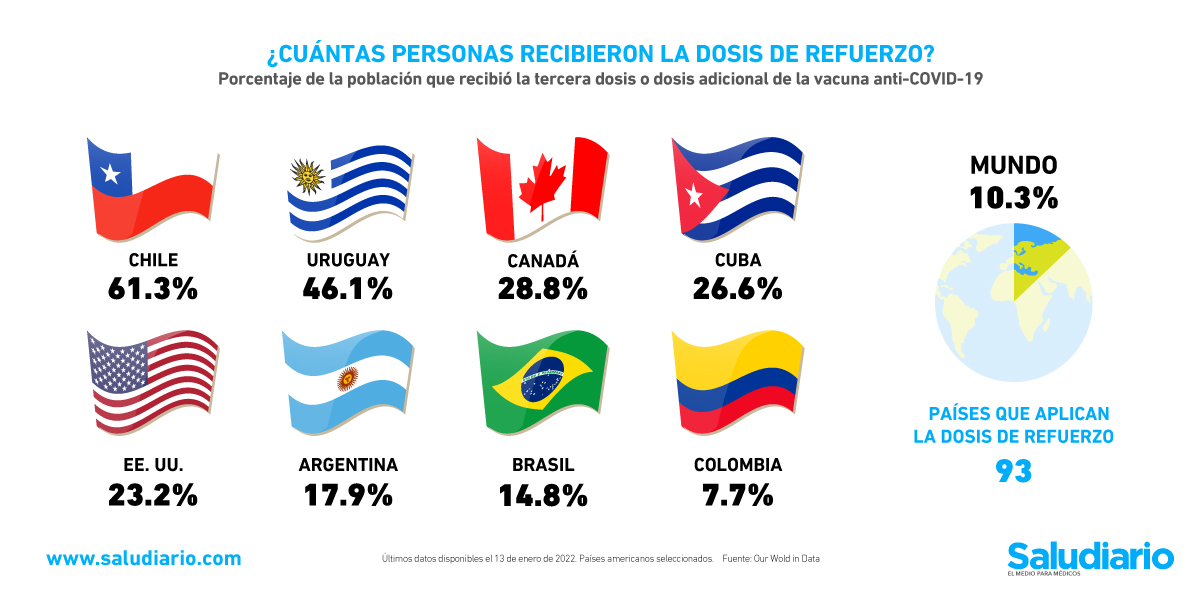 Vaccination has proven to be the best way to combat the current Covid-19 pandemic. In this way, protection is offered to people and the generation of new variants of danger is avoided. Although one of the most common questions is the duration of the antibodies generated. That is why the original diagrams have had to be modified to add a third and even a fourth injection. With this in mind, the following are the countries that have applied the most booster doses in America.

Should the booster dose be applied?

To begin with, it is a decision that still generates divided opinions. On the one hand, each government wants the best for its citizens in order to put an end to this pandemic. In contrast, the World Health Organization (WHO) maintains a position against it. What he argues is that at least one dose should first be offered to the poorest countries before applying a third in the rest of the nations.

Against this background, the distribution of inputs has become one of the biggest problems today. Now the difference between the resources of one country and another is quite evident. While some have already managed to immunize more than 90 percent of their inhabitants, there are others where not even 10 percent is reached.

Now, it cannot be ignored that with the emergence of the Omicron variant there was an exponential increase in infections around the world. It is all due to its high level of transmission and its ability to cause reinfection even in those who already have the complete vaccination schedule.

With the foregoing in mind, interest has increased in increasing protection for citizens. Until now, almost a hundred countries around the world already apply the booster dose, although some are more advanced than others.

Based on platform data Our World in Data Y Statistical, within America, the country that leads the booster dose application campaign is Chile. Until now, 61.3 percent of its inhabitants have already received the third injection. In fact, the government has already approved a fourth dose, although for the moment this option is limited to the population at risk.

In second position of the countries that have applied more booster doses in the continent is Uruguay. Until now, 46.1 percent of its inhabitants already have protection. This level is well above neighboring countries such as Argentina and Brazil, where the percentage of the population that already has the third dose or an additional dose has not yet reached 20 percent.

In that sense, the United States has also lagged behind because only 23.2 percent of the population has the booster dose. While Mexico does not even appear on the list because the number is still very small. At the moment only people over 60 years of age and some sectors such as doctors and teachers have received a third immunization.

I, The Inquisitor Showcases Its First Gameplay Mixing The Witcher And The Sinking City