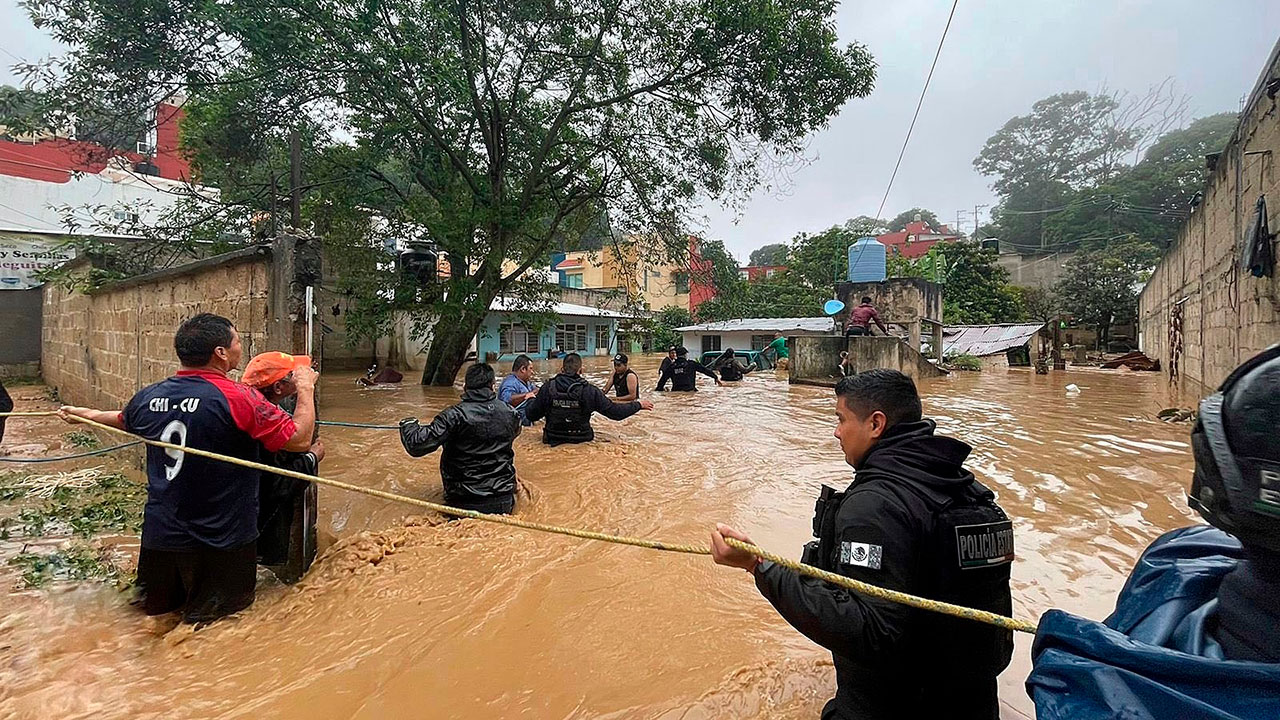 Nine deceased peopleIn addition to severe flooding and damage in the Mexican state of Veracruz (east), it caused the passage of Cyclone Grace, degraded in the last hours to low remaining pressure, while moving towards the Pacific.

In less than 24 hours, Grace touched the Mexican shores as a Category 3 hurricane, remained on land as a Category 1, then a tropical storm and near Mexico City weakened at low pressure remnant.

The torrential rains caused left severe flooding in the city of Xalapa, capital of the state of Veracruz, where streets, avenues, colonias (neighborhoods) and even shopping malls were under water.

Due to this, the authorities warned of the persistent “Risk of landslides and floods”.

Precisely, two separate landslides in Xalapa, which They buried houses at the foot of mountainous areas, causing the death of 7 people, in addition to three other disappeared.

Another person lost his life in the municipality of Poza Rica and one more died in the state of Puebla.

Police sources explained to Efe that the rains softened the land.

In Xalapa, a landslide buried a house and six members of a family died, including five minors, while another landslide caused the death of a seven-year-old girl.

Another death occurred in the municipality of Poza Rica, in the north of the state, where a man was struck by debris.

Grace also generated heavy rains in the northern highlands of the state of Puebla. In the municipality of Huauchinango, a 42-year-old man died due to a fall from a tree.

Grace’s degradation occurred in less than 24 hours after it made landfall at 00:30 on Saturday (05:30 GMT) through the coastal municipality of Tecolutla (Veracruz) as a category 3 hurricane and by 10:00 (15:00 GMT) it was already a storm tropical, previously had reached the central state of Hidalgo as a category 1 hurricane and it was located on the State of Mexico as low remaining pressure.

In the most recent report from the National Meteorological Service (SMN), at 4:15 p.m. (9:15 p.m. GMT) Grace was located 20 kilometers (km) southwest of San Felipe del Progreso, in the State of Mexico, and 105 km west- northwest of Mexico City.

“It is expected that the city will have heavy rain and winds throughout the day,” said the head of government of the capital, Claudia Sheinbaum, on Twitter.

RAIN IN ABOUT 16 STATES

Previously, the SMN reported that Grace’s advance would cause torrential rains in the states of Colima, Guerrero, Michoacán, Puebla, San Luis Potosí and Veracruz.

The impact and passage of Grace, with heavy rains and sustained winds from up to 190 kilometers per hour, left hundreds of damaged homes in the state of Veracruz.

The effects of the meteorological phenomenon were felt with greater intensity in the north of Veracruz, an oil region, rural and indigenous, where its inhabitants reported hours of anxiety and terror.

A wide strip of towns are without electricity and cut off due to road closures; In addition, communication via mobile phone was cut off.

The National Water Commission (Conagua) reported that the Cazones, Actopan and La Antigua rivers, the rivers with the highest influx in the north of the state, exceeded their critical scale in some areas, reason why it issued a general alert before possible overflows.

The Army together with civil authorities carry out rescue tasks in rural communities and urban centers, without having an exact number of damages for now.

XALAPA, THE MOST AFFECTED

Grace also generated gusts of wind in Hidalgo and Puebla, while on the coast of Veracruz the possible formation of waterspouts was anticipated on the north coast of the state.

The governor of Veracruz, Cuitláhuac García Jiménez, reported that 22 municipalities in the state have been affected after the passage of Grace.

The authorities asked the population that is located in low areas and mouths of the Cazones, Tecolutla, Nautla, Misantla, Colipa, Actopan and La Antigua rivers to remain vigilant in the event of possible floods.

In a statement, the agency said that during the night of Sunday and early morning Monday the low pressure zone will interact with Tropical Wave number 22 and with the abundant entry of humidity from the Pacific Ocean.

These conditions will lead to intense punctual rains (from 75 to 150 millimeters (mm)) in the states of Colima, Guerrero, Jalisco, Michoacán, Nayarit and Sinaloa).

In its most recent report, the SMN specified that at 7:00 p.m. (00:00 GMT) the low pressure zone continued “With a 90% percent probability for cyclonic development, It is located 310 kilometers (km) west-southwest of Cabo Corrientes, Jalisco, and its movement is westward at a speed of between 16 and 24 km / h.

This Sunday, thousands of people waited for the restoration of the electric power service, since since the early hours of Saturday some 430,000 users were affected.

The state Federal Electricity Commission (CFE) reported that after Grace’s passage, they have been affected just over 835,000 users in those states.

After sending workers from the Valley of Mexico to the east of the country, the CFE reported the restoration of 36% of the service, although Veracruz is the entity that has made the least progress in the tasks of recovery of service with only 38%.

The authorities carried out this Sunday an assessment of damages in the communities of Gutiérrez Zamora, Tecolutla, Poza Rica, Cazones and Papantla, In which cleaning and sanitation work was carried out, in addition to the removal of trees and felled poles, as well as the removal of debris from streets, roads and highways.

“Starting from an area of ​​low pressure and remnants of Grace has developed Tropical Storm Marty and it is located to the south-southwest of Cabo San Lucas, Baja California Sur, with displacement towards the west ”, informed this Monday the National Meteorological Service (SMN) in a bulletin.

In addition, it also generates waves of two to three meters in several states of the Mexican Pacific coast, so it is He asked the population of that region to take extreme precautions and heed the recommendations of Civil Protection