Bullfrag
Home News Coronavirus in Argentina: 88 deaths and 1,733 infections confirmed in the last... 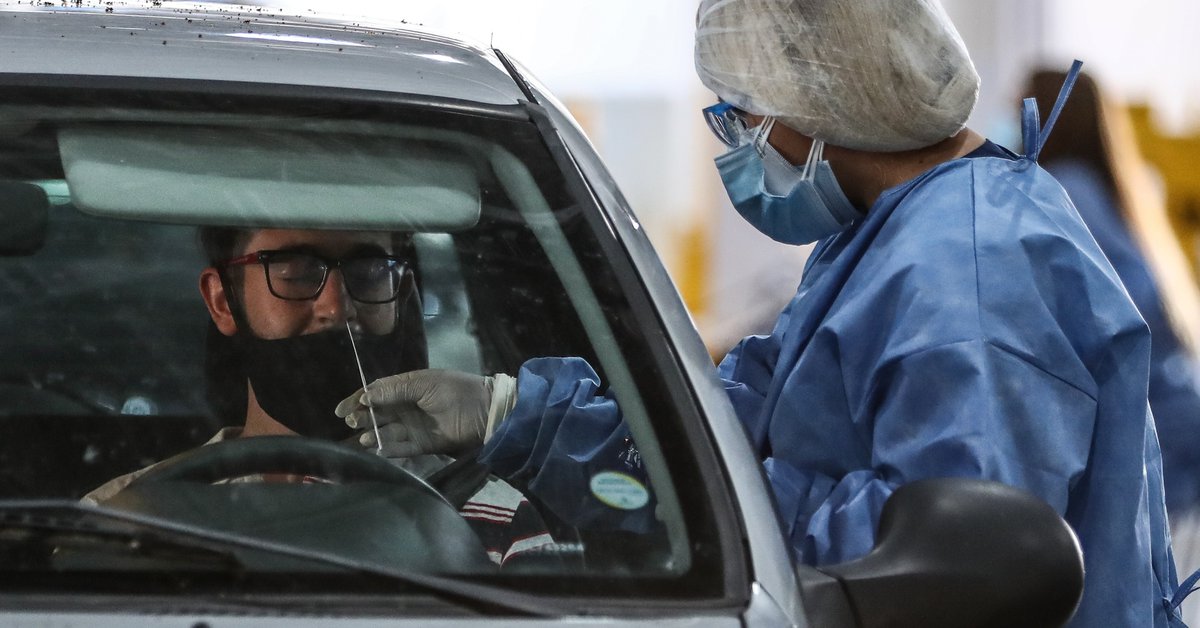 The Ministry of Health of the Nation reported this Thursday, September 23 that, in the last 24 hours, were recorded 88 deaths and 1,733 new coronavirus infections. With these data, the country accumulates a total of 5,246,998 positive cases since the beginning of the pandemic, while the deaths are 114,772.

Of the deaths reported today, 46 are men and 41 are women. The provinces that registered the most deaths were Buenos Aires, Córdoba and Tucumán with 25, 11 and 10 deaths, respectively. A deceased person from the province of Buenos Aires was registered without sex data.

As happened on August 31, September 11, September 22 and today, the City of Buenos Aires did not report deaths as of today, which does not mean that they have not occurred.

On the other hand, from yesterday to today they were made 53,574 tests, with a 3.23% positivity rate, below the 10% recommended by the World Health Organization (WHO). Meanwhile, since the pandemic began, 23,489,285 tests have already been carried out. To date, there are 26,974 active positive cases throughout the country and 5,105,252 recovered.

On the other hand, at the moment in Argentina there are 1,322 people with coronavirus hospitalized in intensive care. According to the epidemiological part, the percentage of bed occupancy at the national level is 38.1% and in the Metropolitan Area of ​​Buenos Aires (AMBA) it is 42.7%.

After 16 consecutive weeks of sustained decline in coronavirus infections, this morning, the Minister of Health, Carla vizzotti, assured that Tierra del Fuego is the first province to achieve herd immunity, a concept that is used when 70% of the population of an agglomerate is protected against a virus. In the case of COVID-19, epidemiologists suggest that 90% or 95% of the inoculated population is needed to achieve immunity.

According to the head of the Ushuaia sanitary portfolio, Judith Di Giglio, Tierra del Fuego has already managed to vaccinate “93% of its population over 18 years of age with first doses and 72% of the elderly with a complete scheme.” In line with this, Vizzotti defined as “very important” the work that the province has done to reach this result, and highlighted the “relief” it implies for health teams.

“Verify that in Tierra del Fuego there are only three people hospitalized in intensive care for coronavirusSeeing the decrease in mortality and infection levels are concrete evidence that so much effort has been worth it ”, said the minister during the conference.

According to the Minister of Health of Tierra del Fuego, 93% of the population over 18 years of age have already been vaccinated with first doses and “72% with the complete scheme” (Photo / Télam)

This morning also A new shipment with 842,400 doses of the vaccine arrived in the country AstraZeneca donated by the Government of Spain through the COVAX Mechanism, the global initiative for equitable access to vaccines against COVID-19. In this way, Argentina has received more than 64.2 million vaccines.

The shipment arrived at the Ezeiza International Airport on Lufthansa company flight LH510 and was received by the Secretary of Access to Health of the Ministry of Health of the Nation, Sandra Tirado; the ambassador of Spain in Argentina, Francisco Javier Sandomingo Núñez; the Councilor of the European Union, Jordi Garcia Martinez; the PAHO / WHO representative in Argentina, Eva Jané Llopis; and the representative of UNICEF Argentina, Luisa Brumana.

“We are very happy to receive these vaccines, which are in addition to those we have in the country, especially to continue completing second doses“Said Tirado at the Argentine Cargo Terminal at the airport, after thanking especially the Government of Spain” from Argentina in general, and particularly from the Minister of Health, Carla Vizzotti, who shared the G20 with the Minister of Health of Spain ”.

It should be remembered that Spain began donating 7.5 million vaccines to Latin American and Caribbean countries last August, out of the total of 22.5 million it will donate globally through the COVAX Mechanism. Within this framework, on August 22, Argentina received 400,000 doses of AstraZenecaTherefore, this new donation totals 1,242,400 vaccines provided to the country by the Spanish Government.

The City of Buenos Aires did not register deaths from COVID-19 for the first time in more than a year
Herd immunity and COVID-19: will it only be achieved when 90% of the population is vaccinated?
Argentina reached 50 million vaccines applied against COVID-19