By KartikDecember 1, 2021No Comments10 Mins Read 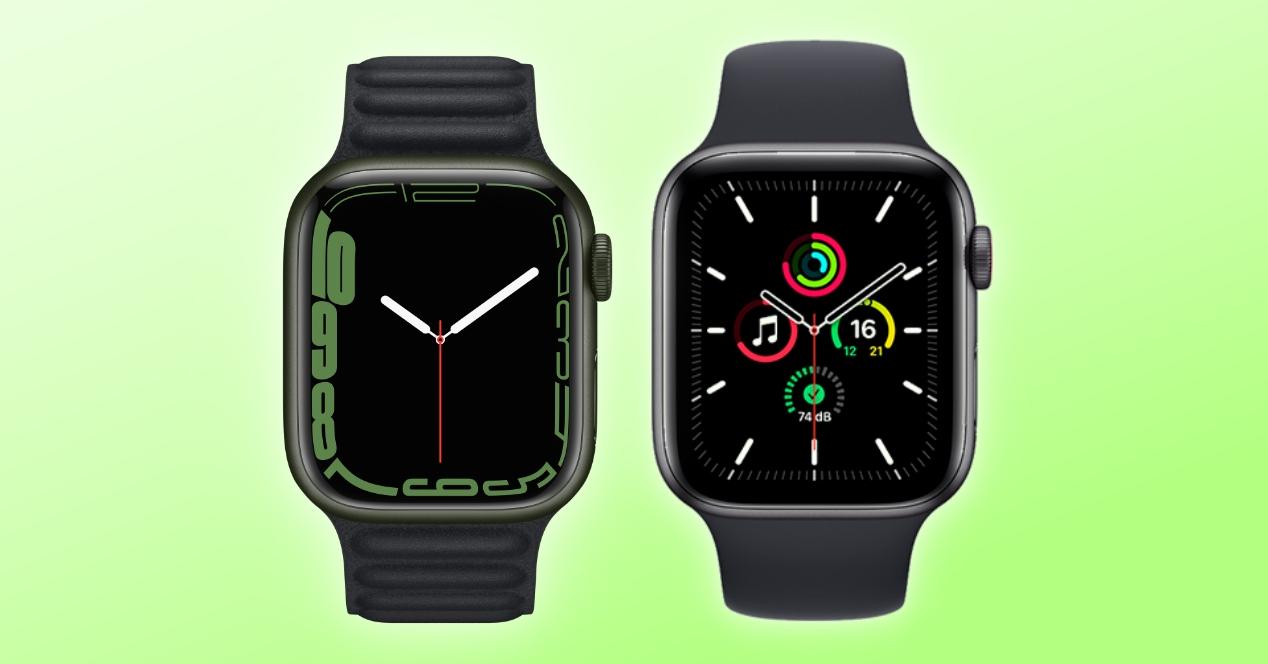 Share
Facebook Twitter LinkedIn Pinterest Email
Index hide
1 A bigger screen and better?
2 Health sensors
3 Fast charging is differential
4 Other minor changes to consider
4.1 No changes in autonomy
4.2 Is there a difference in performance?
4.3 Exclusive spheres
4.4 The colors of the box have changed
4.5 The price
5 Final conclusion, which one is worth the most?

A bigger screen and better?

One of the main novelties that the Apple Watch Series 7 brought was the increase in screen size, but be careful, you do not have to confuse it with the increase with the size of the box, of the device itself. What the Cupertino company has done has been fit a larger screen into the same size as Apple Watch, taking much more advantage of the device’s frames. In this way the screen sizes of both devices are as follows.

However, the differences in terms of the screen are not only found in the size of the same, since the Apple Watch Series 7 has a feature that from the Series 5 Apple incorporates in all its watches, with the exception of the SE, and is always-on display. This function consists of making the screen of the Apple Watch always on, unlike the other models in which the screen when the device is not being used is turned off. In this way, whenever you want, you can look at the watch to check the time without lifting your wrist or pressing the screen to turn it on. Another point where the always-on screen has a lot of value is in training.

We put the screen aside and now focus on the health section. The Apple Watch stands out in the smartwatch market for many factors, but without a doubt, where it is clearly differential is in the health section, so much so that already there are numerous cases in which the Apple Watch has been able to save the lives of many users. All this thanks to the sensors it has, and this is one of the big differences between these two models. Next we leave you the list with the sensors that each one of them has.

As you have been able to verify, the Apple Watch Series 7 has more sensors than the Apple Watch SE, this finally lies in the possibility of controlling more vital signs and being able to offer more and better information to the user about their health status. On the one hand, to measure heart rate it has two sensors, one non-existent in the SE, which is the electrical sensor, and the other a higher generation, which is the optical sensor. You also have to keep in mind that With the Series 7 you can perform electrocardiograms and with the SE there is no such possibility. In addition, another very interesting sensor that the Apple Watch Series 7 has is blood oxygen, able to control your saturation.

In the health section, something that should be mentioned is the possibility that both watches have to detect falls. This It is one of the functions that has helped the most to save people’s lives who have had different types of accidents. Fortunately, both Apple Watch have this functionality, so if you suffer a fall and cannot call your emergency contact or the emergency service itself, the Apple Watch will be in charge of doing it for you.

The autonomy of the Apple Watch is clearly one of the points where the Cupertino company has more room for improvement, in fact it is one of the demands that users of this device have been making generation after generation. However, for the moment that request has not taken effect, probably because, at the moment, Apple has not found a way to include a larger battery inside the body of the Apple Watch.

However, with the Series 7 it has taken a step forward, and since it cannot offer more autonomy, it does give users the possibility to charge their watch faster. This is one of the biggest differences that you will find between both devices, and although it may seem that it really does not matter much, for all users who use the watch to monitor their sleep hours, the fact of being able to charge it for a few minutes before going to sleep and thus fill its autonomy, is a true wonder. Below you can check the charging times that both devices have.

How you have been able to verify the difference is quite remarkable, in fact the reality is that the Apple Watch Series 7 can charge up to twice as fast as the Apple Watch SE. Therefore, for all users who are thinking of acquiring one device or another, this point must be taken into account, because with the Series 7 you will only have to connect it a few minutes a day to fill the device’s battery, while that with the SE you will have to invest more time.

Read:  How to view iPhone photos and videos on your TV using Apple TV without cables

Other minor changes to consider

Obviously they are two devices that have very little time on the market, therefore, the differences between them cannot be really great, in fact both provide a fantastic user experience. We have already told you about the biggest differences that you can find between the Apple Watch SE and the Series 7, however, they are not the only ones, therefore, below we will talk about those that are less differential, but are also present.

No changes in autonomy

We continue talking about the battery, but in this case not the charging speed but the autonomy offered by these two Apple watches. As we mentioned earlier, this is one of the points where the Cupertino company has the greatest room for improvement with this device, since it has been anchored for a long time, probably due to its limited space.

Currently both the Apple Watch Series 7 and the SE have an autonomy of up to 18 hours, with small differences in battery life depending on the workouts you carry out. Even so, we can say that practically, in this section, the two watches behave in the same way.

Is there a difference in performance?

One aspect that all users take into account when buying a device, be it an Apple Watch such as an iPhone, iPad or Mac, is its performance, and obviously, if you are in the position to decide on the Apple Watch SE or for the Apple Watch Series 7 you will want to know if in terms of performance, fluidity or power there are differences between them.

In this case, what makes the difference is the chip that each one of them assemble. By the SE, has the S5 SiP chip with 64-bit dual-core processor, while the 7 series mount the S7 chip with 64-bit dual-core processor, being this 20% faster than the SE. This is the data that Apple provides, but the reality is that both work equally well and the experience you will have with them will be practically the same in these terms.

Whenever Apple launches new Apple Watch models, it gives them the privilege of having an exclusive sphere, and this with the Apple Watch Series 7 has not been an exception. Promoted by the increase in the screen of the device, the users of this model will be able to count on two very interesting novelties. The two exclusive Series 7 dials are as follows.

The Contour sphere is really the novelty in this section of the Series 7, in fact it is the image with which Apple has sponsored the sale of this watch. On the other hand, the Modular duo is an adaptation of the sphere that users of other Apple Watch models already have. In this way, in the Series 7, as it has more screen, the three small complications have been replaced by a larger one, allowing more information to be displayed.

The colors of the box have changed

Something that went slightly unnoticed when the Apple Watch Series 7 was introduced were the new colors of the box, of the watch itself. Until then Apple had always used the same color palette for its watches, incorporating a finish such as red or blue, but never changing the traditional silver and space gray, well, with the Series 7 this has happened. Here is the list of colors in which you can find both devices, in their aluminum version, since the SE is not marketed in the other versions.

The price difference is considerable between the two devices, in fact the Apple Watch SE was born for that purpose, to give the possibility to all the people who did not want to spend so much money to be able to enjoy a device with practically all the functions than its “big brother” but at a much lower price.

Final conclusion, which one is worth the most?

We have already told you everything you need to know about the differences that separate these two Apple Watch models. Now we have to give you what our conclusion is, but first we encourage you to be yourself or yourself who, evaluating the points described in this post, decide if one is worth more than the other.

From our point of view, the reality is that The Apple Watch SE is the model that most users They should buy, since the quality / price ratio has no competition. You can practically carry out the same actions, except those related to the greeting such as saturation and electrocardiograms, but for a much lower price. However, for all those who enjoy using the latest technology and, above all, it is important to have fast charging on a day-to-day basis, the Apple Watch Series 7 is the best option you can find.

In short, both devices are capable of providing their users with a fantastic user experience, but it is clear that there are certain points in which the Series 7 surpasses the SE, now you have to assess if really those aspects are worthy of personal capacity to make you pay the difference in price that exist between the two.