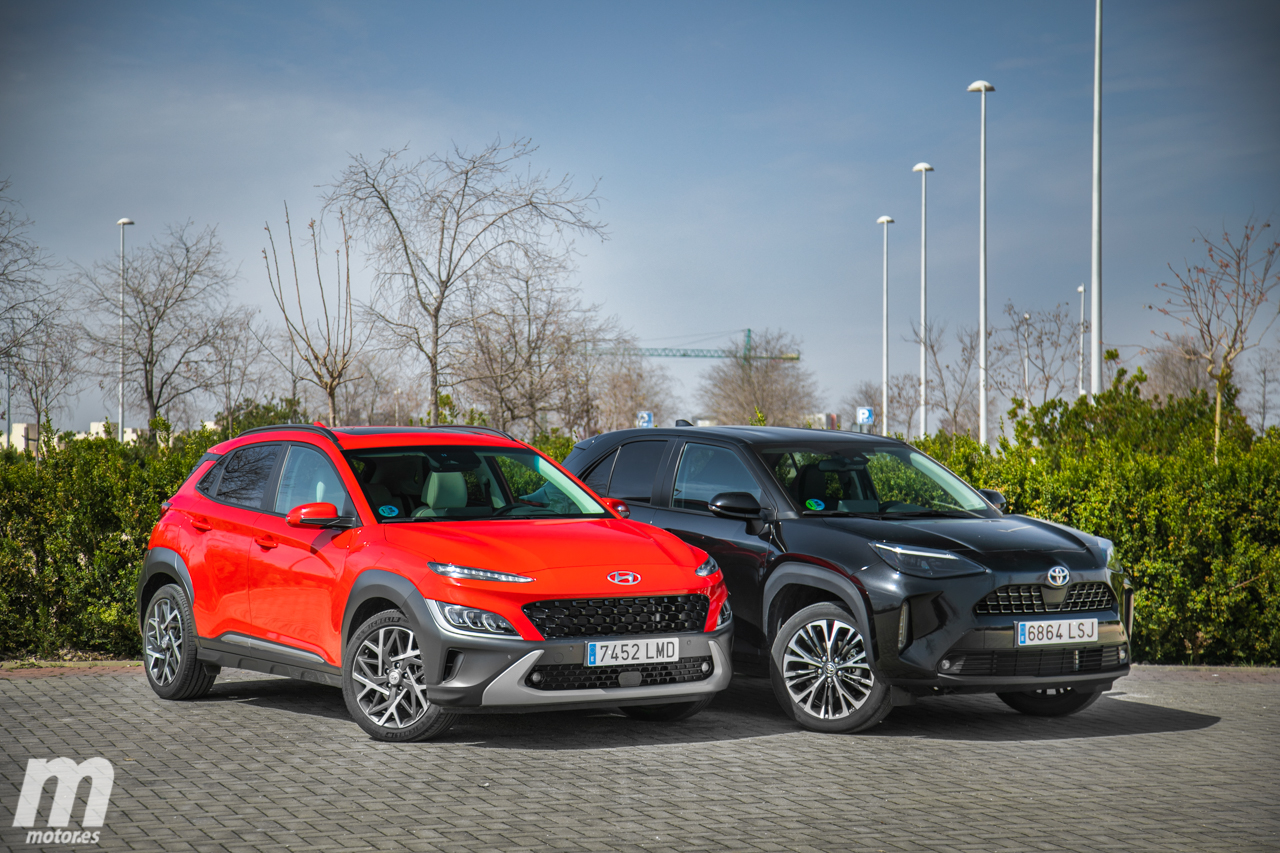 Utility SUVs have gained many fans in recent years. Its advantages are numerous. The ECO label is a powerful purchase factor, so we compare two important models in the category: Toyota Yaris Cross vs. Hyundai KONA Hybrid.

ECO-labeled B-SUVs have many attractions for customers: reasonable price, reasonable size, reasonable performance and the advantageous sticker. Toyota has always dominated the category with an iron fist thanks to the C-HR. But if that wasn’t enough of a slab for their rivals, the Japanese are now launching the Toyota Yaris Cross. Among its many rivals is the versatile Hyundai KONA Hybrid. Two light weights that we submit to one of our usual comparisons.

The fact is that Toyota was able to see before anyone else where the market shots were going. Its hybrids are today a reference, but in recent years rivals as interesting as the KONA have emerged. The Korean has established itself as one of the most attractive B-SUVs because of how much it offers in a fairly contained price range.. But if facing the Toyota C-HR wasn’t enough, the KONA now has another model in front of it that smells like a best seller; the Yaris Cross. With just three months on the market, it already sells more than the Korean.

That a car is sold more than another does not mean that it is better, but on an aesthetic level there are clear differences. Even though the Yaris Cross takes some of its manhood from the utility, little to nothing resembles this. Admittedly, the format is attractive. Strong lines and round shapes for a car where nothing draws attention, while the whole set does.

Something similar happens with the KONA. In this case, the design is more striking since Hyundai opts for atypical solutions made to attract more attention. Decorative plastics, unconventional shapes… After all, Koreans have sought a more daring design to get out of the norm, not to repeat the same formulas that the brands repeat in one way or another. Better or worse? Each one who thinks what he wants, that in a matter of taste there is nothing written.

Design is the main buying factor. If it enters through the eyes, the rest does not matter. Although I do not openly opt for one because of its exterior shapes, I do prefer the interior presentation of the KONA. More attractive and modern than its Japanese rival. Digitization is more generous and in terms of quality it could also be said that it is slightly better, although the truth is that neither stands out much in that regard. They are very B-SUV.

Today, technology no longer escapes even in the smallest sectors. One of the great attractions of the new generation of B-SUVs is its wide range of equipment. In the case of this comparison, Toyota offers us five lines of equipment with a base finish that includes elements such as 17-inch wheels, keyless entry and start, rear parking camera, multimedia system with 8-inch touch panel, automatic climate control and a small security team and driving assistants, among other things.

The hybrid KONA is offered a little more equipped in its three lines of finishes. Standard includes elements such as: 16-inch wheels, automatic climate control, central locking, parking camera, multimedia system with 8-inch touch screen, digital instrumentation with 10.25-inch screen and a more complete team of driving assistants. At maximum capacity, both can show off elements as interesting as the Head-Up Display, the LED lights or the remote connectivity services, although for that you will have to scratch your pocket.

In terms of size, the figures make it clear that the two are practically tracedalthough for the minimum the KONA is slightly larger in all measurements, also in wheelbase, which will allow it to show more space for the occupants of the rear seats.

As you may have already seen, they are just a few centimeters more, but the rear habitability is better resolved in the case of the Korean. With both cars configured for my driving style, I’m just 1.75 meters tall, showing more legroom and headroom, though both are limited by their width. The rear bench seat is better for two adult passengers, if a third has to go it had better not be for short distances.

Where the Yaris Cross does win is in trunk space. Although it is smaller than the KONA, it knows how to get more liters out of a fairly large trunk. 397 liters of minimum capacity compared to 374 of the Korean. Both allow you to play with space thanks to an adjustable tray, hooks where you can hang bags and even, in the case of the Toyota, have a 12-volt outlet. What neither of them offers, not even as an option, is a power-opening tailgate.

Read:  The Dacia Sandero is the most sold car to individuals in Spain in 2021

Although at a mechanical level both are conventional hybrids with the ECO label, each one approaches the challenge from a different point of view. The Yaris Cross bets on a naturally aspirated three-cylinder gasoline engine while the KONA opts for a four-cylinder block also naturally aspirated. In both cases, the power goes to the front axle, through the management of an automatic transmission with continuous variator in the case of Toyota and a seven-speed dual-clutch transmission in the case of the Korean.

Behind the wheel of the KONA Hybrid and the Yaris Cross

It is curious that each brand has a completely different point of view when it comes to dealing with its hybrid scheme. Although the two opt for different systems, the two have some basic similarities. His focus is mainly on the city and its surrounding environments. Medium-speed ring roads and secondary roads that make it possible to fully exploit high-efficiency hybrid technologies.

That’s not the only feature shared between the Yaris Cross and the KONA. Both opt for a quiet and smooth driving. The dynamism does not go with them. The suspensions seem soft and with a clear tendency to bounce, except in the case of the Korean who sports a drier rear axle in his answer. Although it cannot be said that he has a more dynamic touch, he is more cheerful in his response.

The fact of having a bigger engine is already significant. The difference in torque is considerable, and that means that the delivery is more joyful when we press the accelerator fully, despite this we cannot say that it is a prodigy of acceleration, in fact, despite offering twice the torque , the acceleration from 0 to 100 km/h is practically identical. Having a seven-speed dual-clutch box also optimizes response, although it has a clear drawback; consumption.

Those of Toyota have been fine-tuning the efficiency of their hybrid cars for decades and that is noticeable. The e-CVT is not my preferred transmission system, it’s slow and unexciting, but it’s ideal for hybrid cars like the Yaris Cross. Mainly because it achieves really ridiculous consumption figures. The official data barely marks differences of half a liter, but in real life they become something more. In absolutely normal and carefree driving, the Yaris Cross ranges between 4.8 and 5.2 liters on average, while the KONA Hybrid raises the scales to 5.8 litersmore when we are more encouraged with the gas.

The drawback of the hybrid systems of Toyota and Hyundai is that by demanding great efforts, the noise of the engine shoots up as fast as revolutions. The schemes try to operate at the optimum rev range and that means that the noise is considerable, weighing down the feeling of comfort in both cases. You have to keep in mind that such an attitude is only obtained at very specific times, but it is there and it is something you have to know.

At the end of the day, when it comes to driving and dynamics there is no clear winner. Personally, I like the response of the KONA Hybrid better, although I recognize that the consumption is tighter in the case of the Japanese. The balance of forces is the usual tonic in each case. Likewise, the two present differentiated formats to exploit the hybrid set. The Toyota has the usual position B in the change, plus the specific EV button and different driving programs. These programs are also present in the Korean, although it does not offer an exclusive EV mode and retention can be adjusted in several levels through paddles behind the wheel.

With such a tight and balanced comparison, the price factor can end up making the comparison uneven. If we look at the data provided by each manufacturer, the cheapest of the two is the Yaris Cross, available in a range of prices between 24,400 and 31,150 euros, without offers or promotions. The Kona Hybridtaking into account its greater power and its greater possibilities of equipment, It is more expensive, offering between 28,390 and 33,990 euroswithout offers or promotions.

Finally, as expected, the price factor ends up uneven a very balanced comparison. Thanks to its lower cost, the Toyota Yaris Cross takes the cat to the water, although it must be recognized that it is also better in efficiency and fuel consumption. The KONA Hybrid is a worthy rival that convinces me more because of its handling, its equipment and also because of the better offer of space in the rear seats. In this case, there is no better choice than another, only a model that can be more adjusted to the pocket, something that, seen what has been seen, is not a trivial issue.

Samsung kicks off 3 nanometers: what benefits will they bring?