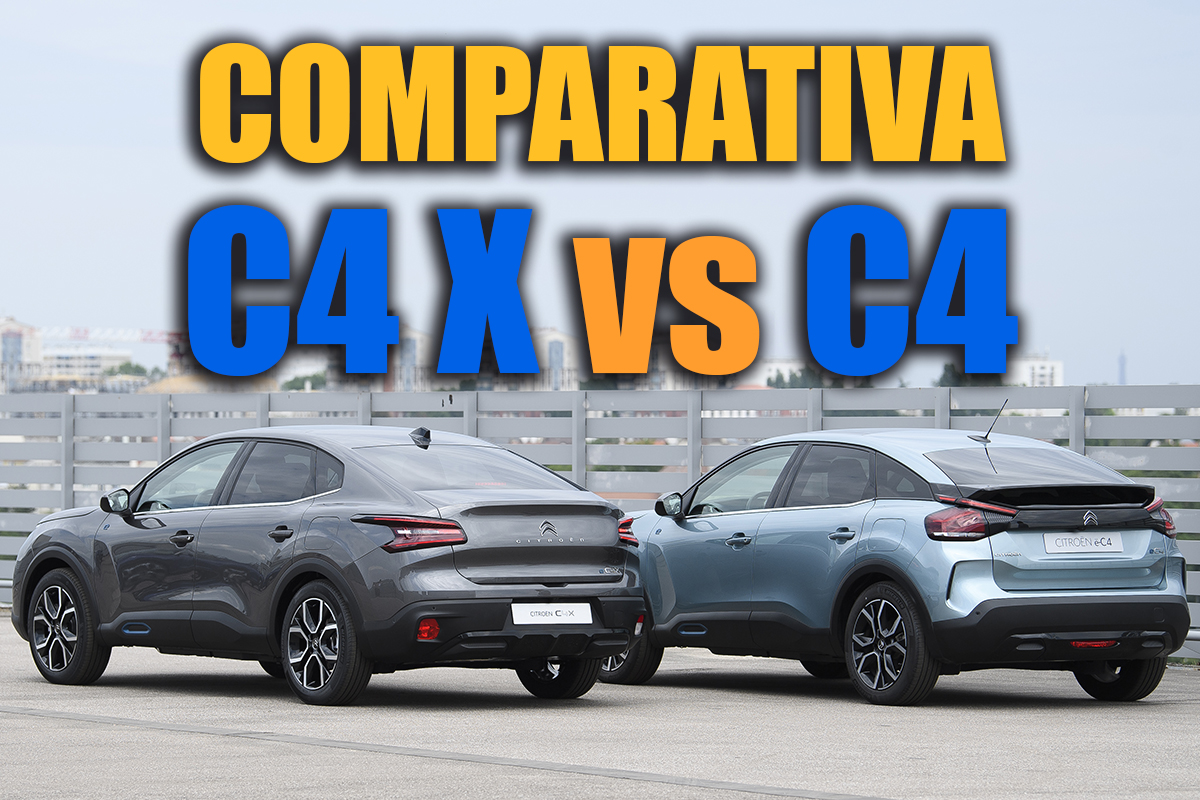 The new Citroën C4 X has been presented in society. Citroën incorporates an alternative to traditional SUVs and sedans to its range. The new C4 X is closely related to the Citroën C4, as its name indicates. Now, how are the two models different? We confront them to discover their main differences.

citroen has decided to expand the C4 range with a new and very interesting proposal. The entrance on stage Citroen C4 X
has generated a lot of interest. The French brand has developed a particular alternative to SUV-type vehicles and traditional sedans. The new C4 X will storm the dealerships of the Old Continent with a clear objective. Occupy the existing space between the current Citroën C4 and Citroën C5 X.

In terms of design, the new C4 X is clearly influenced by what we can define as its “big brother”, the C5 X. It is the result of introducing an SUV, a sedan and a fastback in a shaker. The result? It is obvious, a “crossover” vehicle that will have to face such interesting models as the recently presented Peugeot 408 and the Renault Arkana.

The C4 has played a leading role in the development process of the new C4 X. Both models share a very close relationship that goes far beyond the name. Both make use of CMP platform and have the same wheelbase. This, as we will see later, is decisive both in terms of habitability and in the choice of the production center in which the new Citroën model will be manufactured.

If we take a tour of the exterior of these models and focus on the front, we will find a really similar design. The new C4 X echoes the characteristic features of the C4 that we can already find in our dealerships. The optical groups are divided into two levels. The same goes for the lower air intakes, the grill and the hood.

Read:  Chile will manufacture synthetic fuels from 2022 with wind energy (without emissions)

The side view brings out the true essence of the new C4 X and, above all, the differences in relation to C4 are revealed. It is from the C-pillar where the changes made to the design are concentrated. The fall of the roof and the trim of the aforementioned pillar must be highlighted.

Finishing this tour at the rear, we will discover that the new C4 X has different taillights than the C4. They are thinner and more enveloping optics. The bumper has also changed and, instead of a tailgate, we have the typical trunk opening of a car with a sedan body.

Leaving aside the outside, if we go into the inside the C4X we will quickly be enveloped by a very familiar atmosphere. The first thing to note is that it has the same habitability as the C4. And this is because both models have the same wheelbase and share a platform.

The C4X also inherits the infotainment system from the C4. A multimedia system managed through a 10-inch touch screen. In the multifunction steering wheel, the climate control module, the central tunnel and the door panels there are no surprises either.

The C4 X engine range
They also show that Citroën has followed the same strategy as with the C4. In the Spanish market it will be available together with a selection of gasoline and diesel engines. A 100% electric variant will also be offered, the new Citroën ë-C4 X.

Last but not least, the technical relationship that the new C4 X maintains with the C4 has been decisive for the production process of the new Citroën model to be carried out in the facilities that Stellantis has in Spain. More specifically in Villaverde, Madrid. Therefore, we are facing a new model that bears the “Made in Spain” seal.

Udyr, the skinchanger, is reborn in League of Legends version 12.16