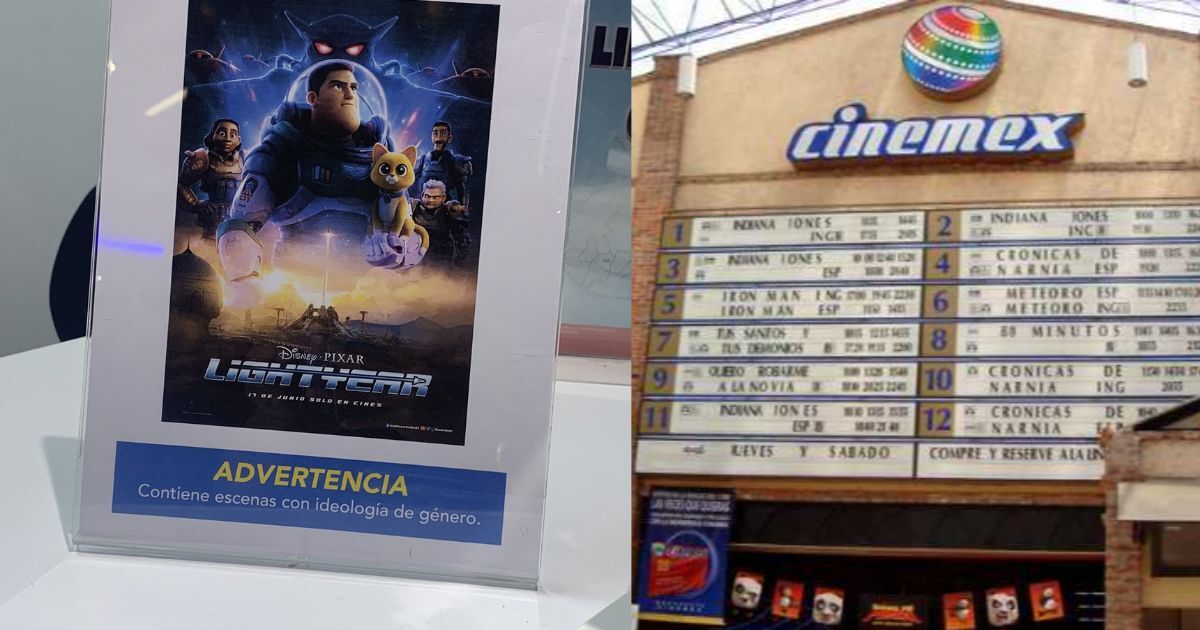 This week, ‘Lightyear’ not only monopolizes the billboards of the cinemas, but the conversation about tolerance, censorship and the inclusion of sexual diversity in the middle of LGBT pride month. The consequence: more publicity for the Disney film, but also a series of false news.

How it all started? It turns out that ‘Lightyear’ contains a scene where two female characters kiss. The famous “lesbian kiss” of ‘Lightyear’ has already caused the censorship of the film in 14 countries of the Islamic world. And, in countries like Mexico, some have expressed their discomfort with this type of scene. There are even those who consider it unsuitable for a children’s film.

The networks ended up lighting up after the appearance of a photo with a warning about this content, in a movie theater that was falsely said to belong to Cinemex. What really happened?

Warning about “gender ideology” in ‘Lightyear’ happened in Guatemala

Fáctica, an organization specialized in combating disinformation, verified that the user who first uploaded this photograph was a viewer from Guatemala, not from Mexico. The tweeter confirmed that she herself took the photos in a Cinema Bistro, located in zone 10 of Guatemala City, on June 15. And that she shared them on social networks on June 16. Also, Fáctica called the movie theater and the staff confirmed that the warning message is real.

A cinema in Guatemala warns that the film ‘Lightyear’ “contains scenes of gender ideology.”

🏳️‍🌈Specialists warn that this term has been used to delegitimize the rights of the LGBTIQ+ community.@angeldavidmr tells you the details https://t.co/P4rJI2W9hS

In Mexico, the movie of the Toy Story franchise spreads smoothly and without censorship. In fact, the National Chamber of the Film Industry celebrated that in the country there is no censorship, but rather inclusion and respect for diversity within movie theaters.

Read:  Barack Obama is to blame for an unexpected death of 'House'

“The National Chamber of the Cinematographic Industry (Canacine) with delegations in eight states of the country, and which brings together more than 200 partners (related to the production, diffusion and distribution of cinematographic works) celebrates that in Mexico the film has not been censored ‘Lightyear.’ Canacine’s values ​​include respect for diversity and we are convinced that inclusion enriches all aspects of life, generating value for the common benefit,” said Tábata Vila Villa, General Director of Canacine.