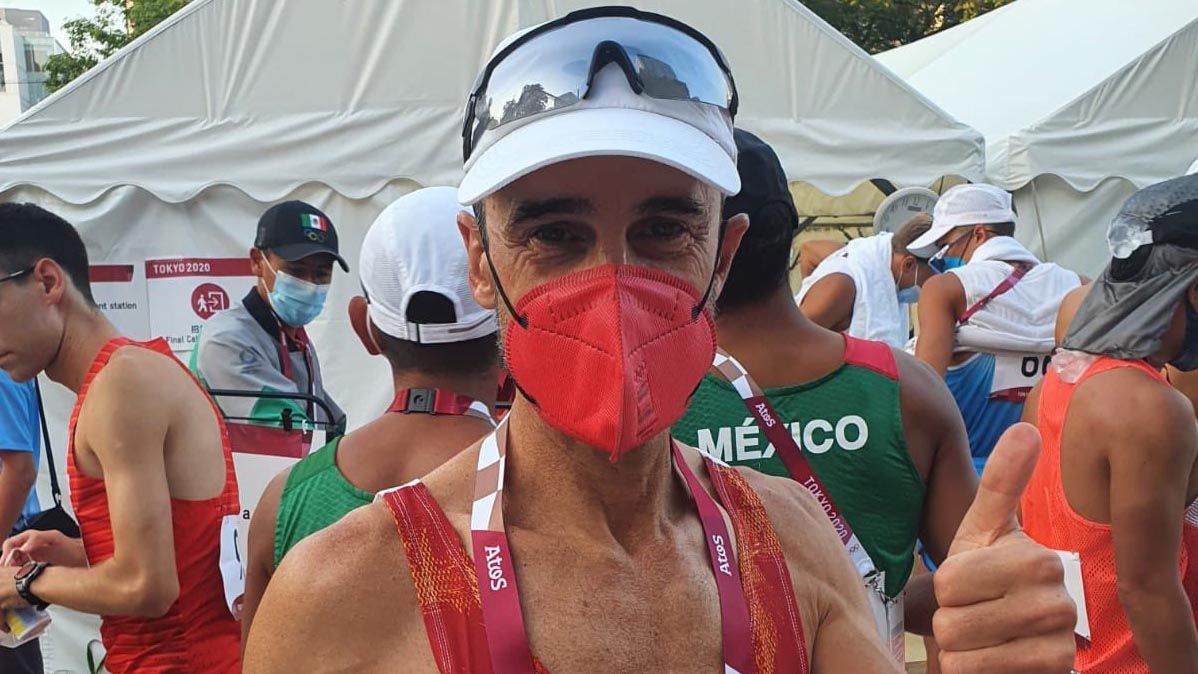 Jesús Ángel García Bragado has become this Friday (early morning in Spanish lands) in the only athlete in history who has participated in eight Olympic Games in about 50 kilometers marches that have risen to a colossal Marc Tur with a fourth place when he had the bronze in his hands until Canadian Evan Dunfee snatched it from him on the home straight.

When a good part of the cast of marchers who took the exit in Sapporo had not been born yet, ‘Chuso’ was from the game at the Barcelona Games, where he was tenth with 3: 58.43. Without going any further, the aforementioned Tur was born two years later.

From that historic Barcelona appointment, the icon of the march has not missed an Olympic event establishing a record that will be very difficult to beat and even equal in the future, since for this he has had to stay three decades in the elite.

The walker settled in Catalan lands for more than four decades did not finish the race in Atlanta 96, he was 12th in 2000 in Sydney (3h: 49.31), fifth four years later in Athens (3h: 50.33) and fourth in Beijing in 2008 (3h: 44.08) in a date in which only the cowardice of the athletics governing bodies has deprived him of bronze by holding the Russian Denis Nizhegorodov, guilty of a fraud with urine tests since 2008 … but the tests of those Games were not retested.

That is the great disappointment, the only goal that has not reached throughout his successful career. Then Chuso lived through an ordeal when he arrived injured at the London Games for wanting to refine too much at 43 years old at that time after his bronze in the 2008 European Championship in Berlin and he could only be 19th with 3h: 48.32. And five years ago he finished 20th and first Spanish with 3h: 54.29 just three months after breaking an arm in a fall and with a muscle tear that occurred a few weeks before.

In Tokyo, García Bragado had before him the possibility of taking a walk to secure that place in history of athletics, but he doesn’t understand compromises. So much so that he has undergone a special diet in the two months leading up to the Games to lose as much fat as possible and arrive in top shape, although he ended up experiencing a real ordeal.

True to style, Chuso went from less to more In a rear group with Luis Manuel Corchete, while Marc Tur was brave and installed himself in a front group that broke the start of the Chinese Yadong Luo, who enjoyed a 25-second advantage when passing through the tenth kilometer (47.47).

READ:  This is what Hit & Run looks like in Unreal Engine 5

The Asian also went through the 20 first (1h: 35.04), but was immediately swallowed up by a group in which the French entered and left Yohan Diniz in one of his usual ‘shows’ until he finally retired shortly before the 28th. The brand new world ‘record holder’ has lost many medals for his particular way of doing things.

Finally, when passing through 27, the Polish Dawid Tomala launched a serious attack, which began to take Tur down … but what happened is that the ‘heir’ of the mythical Robert Korzeniowski left after a brutal partial of 21:13 between 30 and 35 that allowed him to take more than two minutes of rent while the Balearic Islands resurfaced and was at the forefront of the chasing group while Chuso began to suffer a lot from behind and retired from behind.

When passing by 42, Tomala was already ahead of a small group in 3:03 in which a master Marc Tur pulled He was only accompanied by the Portuguese veteran Joao Vieira, the German Jonathan Hilbert, the Canadian Evan Dunfee and the Japanese Masatora Kawano, who contacted again after putting his hands to his chest and fainting. There was a medal option! And behind Chuso passed those of Cain, but did not get off the test.

The disciple of José Antonio Quintana, who has worked piecemeal in recent weeks at CAR from Sant Cugat in a ‘heat chamber’ to adapt to the conditions that the athletes have encountered in Sapporo. And he took the responsibility again to take down Dunfee first, then Kawano and finally Vieira. Only Spanish and German were left for two medals!

The second red card complicated Tur’s options two kilometers from the finish and a fainting spell in the final 300 meters allowed Dunfee to almost pass him over the finish line. He had more than deserved it! Huge Marc Tur! The gold went to Tomala with 3h: 50.08, the silver was taken by Hilbert at 36 seconds, the bronze by Dunfee at 51 and the ‘chocolate’ medal at 60 seconds was for the Spaniard, the second of the march after Álvaro Martín .

Far behind, Chuso became more of a legend and managed to cross the finish line in 35th position with 4h: 10.03. Anyone else had retired when the physical almost did not allow him to leave and ended up walking, clinging to the track like a wild boar. He could not withdraw. Thanks a lot!

PayPal changes the design of its application and adds new functions