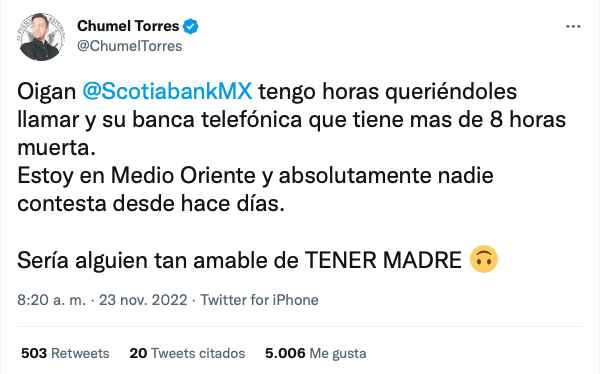 Complaints and bad consumer experience is one of the most recurring topics on social media. It is the recent case of influencers Mexican Chumel Torres, who used his Twitter account to denounce from Qatar the malfunction of Scotiabank’s telephone banking, assuring that he has been dead for days, so he has not been able to carry out his operations.

When we talk about technology in various industries, we cannot fail to mention the use of online banking, which has become the best tool for people around the world. According to data from a study of Bank of Mexicowith the increase in the use of information technologies in the area of ​​finance, the use of banking services has been increasingly concentrated in digital platforms.

In Mexico, the number of Internet banking users has been constantly increasing in recent years, where between 2010 and 2020, The number of people making transfers online, according to data from the last quarter of each year, increased by almost 42 million users.

In this sense, the Covid-19 pandemic has stimulated financial inclusion, which generated a large increase in the adoption of digital payments in the context of a global expansion of formal financial services. In agreement Global Findex dataAs of 2021, 76 percent of adults globally had an account with a bank, other financial institution, or through a mobile money provider, an increase from the 68 percent reported registered in 2017.

The youtuber requested that the banking institution improve the service and operation that they provide to their users in telephone banking, ensuring that they have wanted to call each other for hours and have been dead for more than 8 hours.

Also, the influencerswhich has more than three million followers on Twitter, points out that all these operations He does them from the Middle East, so he urges someone to answer him.

hey @ScotiabankMX I have wanted to call them for hours and their telephone bank that has been dead for more than 8 hours.
I am in the Middle East and absolutely no one has answered for days.

It would be someone so kind to HAVE A MOTHER 🙃

Given his public complaint, the tweet has received various comments from other people who took advantage of complaining against the same bank, or even other institutions.

Exactly the same thing happened to me with Santander, I was in the old continent and I had to fight it, fortunately I have an account in Banorte, but it was a debit, and when I arrived they told me “it was a matter of going to the branch and it would be solved right away” …

They are a very backward bank, they seem to be stuck in the 90’s in systems and attention. They are able to ask you to go to the branch where you opened your account

Indeed, it happened to me. It took me almost a month to replace my card because I had to solve it ONLY at the branch. inch @ScotiabankMX net.

It’s a pain in the ass to talk to a human being on any phone in any bank.

In that context, The Merca2.0 team, seeking to give both parties a voice, requested the brand position from Scotiabank, but so far we have not received a response to the complaint from the influencers.

It is not the first time that public figures and content creators use their social networks to make a public complaint against a brand, remember that last week an OnlyFans model denounced on TikTok having lost her savings in Citibanamex and all after trying to buy a Gucci jacket of 90 thousand pesos.

Read:  Is Qatar the alternative to Russian natural gas that Europe was looking for?

And this is how bad practices in the consumer experience can generate a great debate on social networks, That is why brands must solve these types of complaints more quickly, thus improving their dealings with their users.

Yulay fails to go to Qatar, but Chumel Torres does and becomes a football narrator