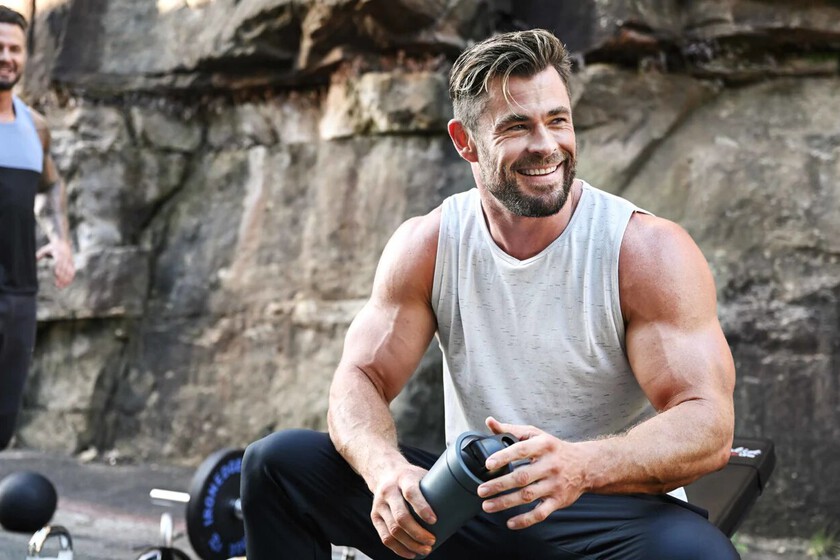 A few weeks ago, Chris Hemsworth left us on instagram a very hard training routine in which he only you need your corporeal body to complete it.

It is four rounds in which you have to do 10 exercises, performing two of them in a row and resting for 20 seconds and perform another two exercises, and so on until you complete all 10. After completing all 10 exercises, rest for a minute and repeat.

First of all, comment that the first exercise has to be done for 30 seconds and the second for 20 seconds. With that said, here we go!

We start with this first exercise. To do it, we must do a squat and perform a “switch” with the hips keeping the core as stable as possible.

A great exercise to work the core. To do this, we will place ourselves in plank mode (with the forearms supported) and we will climb keeping the spine and hips completely neutral until the palms of the hands are resting on the ground. Then we go back down.

An exercise that requires great power. To do it, we will do a push-up and get up very explosively by jumping to go back to the ground to do another push-up.

To perform this exercise, We will lie on the floor with the hips flexed and knees extended. Next, we will do the abdominal crunches to touch our feet.

Read:  WHY IS RUNNING IN YOUR OLD SNEAKERS SO DANGEROUS?

There are multiple ways to perform this exercise. To do it like Chris Hemsworth does, we’ll sit on the floor while supporting ourselves with our hands. Then, we will flex and extend both the hips and the knees keeping the core totally neutral trying to the dorsal area does not exert any movement.

This is a great exercise for working your legs, as having your hands behind your head we will not have any kind of inertia by the arms to perform the squats.

When doing this exercise, we can do it both with our hands supported and without support. Chris Hemsworth does it with his hands supported. For it, we sit on the floor with the hips slightly flexed and knees extended and we begin to “kick” flexing and extending the hips.

To perform this exercise we will get into a plank position with the hands supported instead of the forearms. Next, we will abduct and adduct the hips and then we will do a push-up to repeat the cycle of the plank and push-up.

We end up with a great explosive exercise to work the legs. To do it, we will make a stride and, when going up, we will do it so fast that we will jump to change the position of the legs to perform the same movement.

Rest for 1 minute and repeat

In Vitónica | Gain muscle mass in the gym: a three-day training routine to gain volume

In Vitónica | The keys to start gaining muscle mass: when and how is it best to do it

Over the rainbow; healthcare for LGBTQ+ people