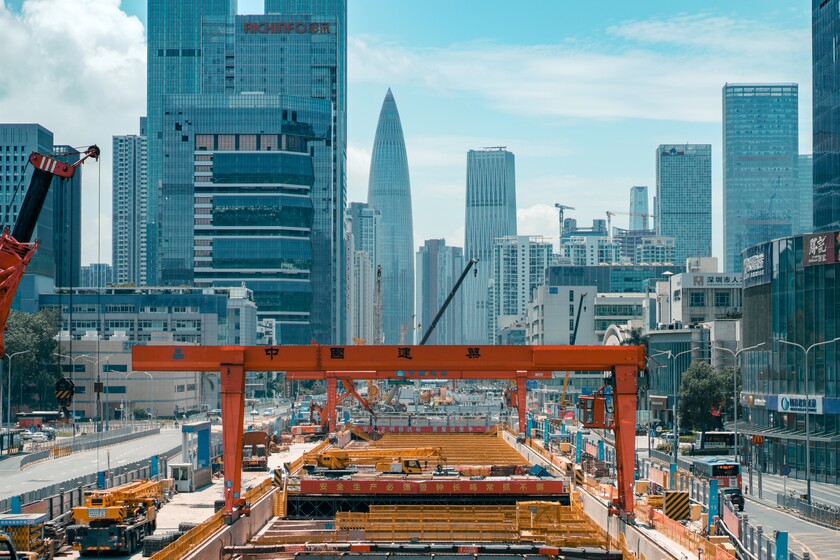 For decades, China’s real estate market seemed limitless. Big companies like Evergrande built cities, created jobs, gave the middle class something to invest their savings in, and enriched local governments that sold them land. Along the way, they helped contribute to economic growth that astonished the world. Now, prices have become too high and the government is trying to stem a possible unprecedented real estate crisis.

You’re also sending a message: no business is too big to fail. And to understand everything that is happening with its real estate market, you have to ask yourself why Evergrande could become the Chinese Lehman Brothers.

The context. The Chinese economy was able to recover quickly from the Covid pandemic, helping to sustain a boom real estate. The sector’s footprint has become so large, with real estate production and real estate services accounting for 29% of the country’s GDP, that absorbing a significant housing slowdown would affect overall growth. That 29% rivals Ireland and Spain in their pre-financial crisis peaks. And it is difficult to see how a slowdown can be avoided even if banking problems were contained.

And of course, the Chinese authorities exert enormous influence over the housing market and, in the past, have used a number of tools to alternatively adjust and stimulate the market. But the problem is not only to maintain stability, but also to maintain the scale of production and employment. The fact that the square meters of housing per capita in China already compete with those of much richer economies like Germany and France is sobering.

This graphic you post today @krogoff I find it relevant to contextualize the crisis in the Chinese real estate sector. In 2017, the country’s GDP was already almost 30% dependent on brick. More than in Spain during the peak of the bubble. https://t.co/aBLSysvxbQ pic.twitter.com/QqLyovCBQj

The collapse of the giant. Evergrande has not been the trigger for everything that was being forged underground and shows the cracks in the Chinese real estate market. It was its main construction company, its cranes dot the horizons of the country. But now it is collapsing under the weight of more than $ 300 billion in debt. And what is at stake is much more than the fate of a single company: Evergrande’s troubles have raised fears that the real estate and commercial market, which powers up to a third of the world’s second-largest economy, could collapse.

Buyers are desperate, waiting for 1.6 million apartments to be completed. The company has nearly 800 projects under development. Building materials suppliers are owed more than $ 100 billion in payments. Workers are panicking because the loans they made cannot be repaid. This has set off a chain reaction, pushing equity markets lower as construction companies fell.

What really happened to them? That being a symbol of the excesses of the Chinese housing bubble has its consequences. It grew disproportionately in the good years at the turn of the century. Its business model took advantage of easy credit to build with money borrowed – by banks, its suppliers, its clients and even its employees – buildings that it sold before they were finished. With that money he executed new projects.

Read:  What if I don't want to spend a euro when a relative dies

This business model opened the door for them in numerous sectors, from financial, to EVs, to soccer. But last year he began to struggle. Why? Regulatory bodies launched a series of measures to avoid alarming levels of debt in the economy, and in the real estate sector in particular: this industry accumulates 4.26 trillion euros of debt. Since then, companies are no longer able to pre-sell their promotions, which has led to serious liquidity problems for Evergrande.

Will the government respond? The problem, in many ways, is also Beijing’s doing, and the impact of an Evergrande collapse will ultimately depend on what the Chinese government does. Evergrande’s problems stem from new restrictions on home sales as Beijing tries to control property prices and address growing concerns about home prices. Plus, it’s also a wake-up call to brick moguls who borrowed a lot of money in recent years.

While market watchers once assumed that Beijing would intervene at the first sign of distress, rating agencies, banks and investors have weighed in on a potential default. Many now predict that the government will not intervene until other developers begin to fail and pose a collective risk to the broader financial system.

Beijing’s two optionsRegulators could step in and force state banks to give the company the money it needs to pay its suppliers, workers, buyers and employees. But other companies would follow suit, getting drunk on debt and fueling a growing housing bubble. Or it could let Evergrande fail entirely, resulting in an economy collapse.

It’s the whole real estate market. Like Evergrande, other Chinese property developers have hundreds of debts and are forced by regulators to pay them off under the “three red lines” rules that aim to limit the banking system’s exposure to property. Namely, the real estate market is starting to slow down, and industry practices that helped drive sales and keep builders afloat, such as pre-selling properties before completion, are being questioned.

Comes from afar. Evergrande exemplifies the troubles that have plagued the Chinese economy for years, never reaching a full-blown crisis. Real estate markets are inflated across the country. One determining factor in the growing housing crisis is that China has hardly any property taxes, making real estate a tempting asset. Most of the companies in China are, to some extent, real estate companies that invest in property on a large scale.

The Chinese urban middle class, one of the most important groups supporting the Chinese Communist Party, has invested heavily in property. That has turned them into keen real estate speculators and has often led to huge protests after local attempts to control prices, prompting authorities to back down.

Thanks to China’s extraordinary growth and the toolkit available to its government, these problems have remained underground. But concerns that Evergrande will become China’s Lehman Brothers is pushing increasingly drastic solutions.

Eco-innovation, the development of the future • Forbes Network • Forbes México