“chilango soothing”; they go out to distribute rolls for the scare after earthquake 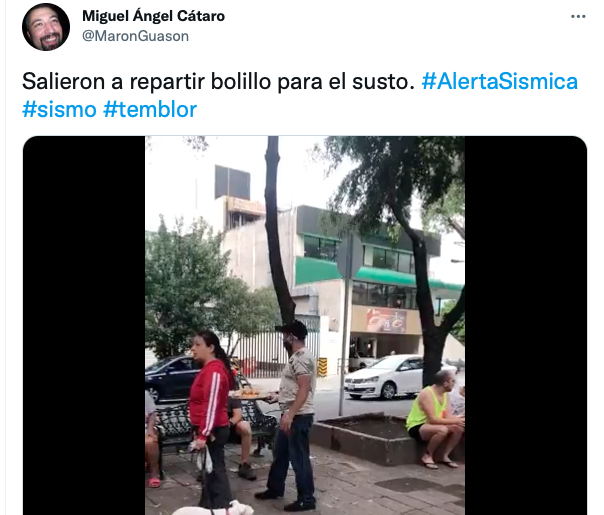 The content found on social networks will always surprise various Internet users to the point of making it go viral. This Friday around 1:53 p.m. an earthquake of magnitude 4.8 was recorded, with an epicenter in Acapulco at a depth of 22 kilometers, and In Mexico City, the seismic alert was activated, carrying out all the evacuation protocols and leaving more than one dead of fright, which even Internet users recorded a person who was distributing the popular “bolillos”, winning the heart of the digital pulse for the “soothing chilango”.

According to the Digital 2021 Global Overview Report published by We are Social and Hootsuite, it details that Mexico currently has 129 million inhabitants, of which a 80.9% live in urban areaspso the number of connected mobile devices in the country is 115.4 millionwhich constitutes 89.1% of the population.

Likewise, the study indicates that Mexico has 92.01 million people connected to the Internet and 100 million active profiles on social networks, which means that some users have more than one profile per social network.

Read:  Chris Rock doesn't have Will Smith's Rolls Royce, but he bought this...

Given these data, it is normal that on the various digital platforms some content that is published is a trend or viral, narrating a bit of the country’s events at the digital pulse.

After the scare this Friday and after the evacuation of many people from their residences and offices in Mexico City, An Internet user shared a beautiful action of a man who was distributing rolls to people who were in the street after the seismic alert stopped sounding.

They went out to distribute bolillo for the scare. #SeismicAlert #earthquake #shaking pic.twitter.com/ByPVWNAoCG

The video shared by the user @MaronGuason on his Twitter account went viral and was recorded various comments from people that indicate that it is a good action of man.

“It can be heard funny… But it is appreciated, some of us if that little sound of seismic alarm traumatizes us…”, says one of the comments.

“Wow!! What a beautiful gesture of compassion, how good that true human beings still exist, ”wrote another Internet user.

“Hero without cape! Pd those who make fun of it if it helps to scare, comforts, removes hunger, covers the stomach from hormonal secretions, gastric acid and bile when a real scare is detonated, ”says another Internet user in the same video publication.

It is normal that whenever an event of this magnitude is registered, social networks in Mexico are flooded with content of this style and with the typical phrase “a bolillo for fright”, that if you are Mexican, there is a good chance that at some point in your life someone has told you.

Seismic alert is activated in CDMX; snapshots report no perception of movement