“Checo” Pérez presents a helmet in honor of ‘Black Panther’ 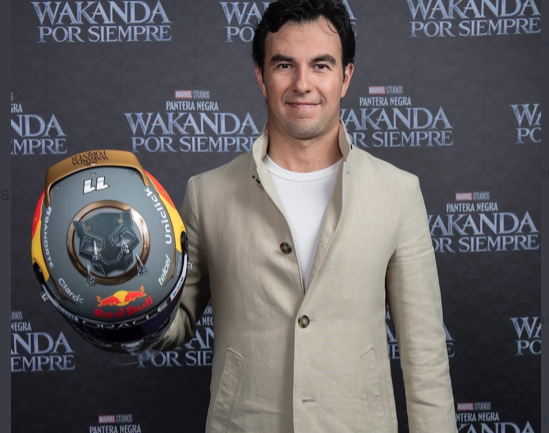 The digital space has positioned itself throughout the world as the best communication tool for people. That is why it is normal for the digital pulse to talk about everything that happens in the world, creating a trend at times, as in the case of the reaction of the Mexican pilot Sergio “Checo” Pérez, after the presentation of the helmet that he will wear this weekend at the Brazilian Grand Prix, and which has a design in honor of ‘Black Panther’.

Formula 1 has become the best window of exposure for brands, personalities and companies to make themselves known to the rest of the world. In that sense, formula 1 remains one of the most watched sports in the world, where according to to its 2021 report, which entered 2 thousand 136 million dollars to its accounts, and a global audience of 445 million viewers.

“Checo” Pérez presents his helmet in honor of ‘Black Panther’

As one of the most outstanding figures of this season in Formula 1, Mexican Sergio “Checo” Perez has generated a large number of stories in the digital world.

On this occasion, the Red Bull Racing driver will return to action this weekend with the Brazilian Grand Prix, in which he will try to repeat the podium after the GP in Mexico.

Through several videos that circulate in networks, you can see how the reaction of the Mexican was when showing the helmet that he will wear in the next race in honor of the film. ‘Black Panther: Wakanda Forever’, from the Marvel franchise that will be released on November 10 in world theaters.

MY FATHER DON SERGIO PEREZ IS ALSO THE KING OF WAKANDA. Cool the helmet that will premiere in Brazil this weekend from the new Marvel movie, Black Panther pic.twitter.com/QZ9TtnUQkt

“My helmet for the weekend, do you like it? Hopefully we are as fast as Black Panther, ”revealed the pilot on social networks.

My helmet for the weekend, do you like it?
I hope we are as fast as Black Panther 💪 #wakandaforever #BrazilGP

My helmet for the next race, your thoughts?

Hope we can be as fast as Black Panther #wakandaforever pic.twitter.com/9NhCgn4nUv

With this action, the Mexican showed his fanaticism for the Disney franchise film.
“When you put on the suit, the helmet and you are on top of the car you are a bit of that character, but when you are down you are normal people, with the same concerns as everyone else, the same dreams and (the desire) to go for more each time”said the Mexican.

It has already become customary for the drivers of this sport to create uniforms, helmets, and even a graphic image when they go to run a new GP, with the sole idea of ​​capturing the attention of the fans and attracting them to their teams.

As an example, when the Mexican GP was held, Pérez also wore a helmet with Mexican designs, especially to honor culture and the Day of the Dead. For its part, the Ferrari team generated and surprised everyone with its graphic line and a Quetzalcoatl poster.