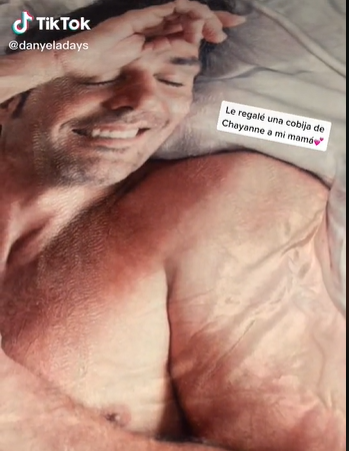 December is synonymous with family, surprises, gifts and happiness; This is demonstrated by a tiktoker who just made his mother viral for being a fan of Chayanne. And it is that the “father of all Latin America” ​​is still the sensation among older women, who saw him grow up at the peak of his artistic career.

On this occasion, Daniela Alejandra, a TikTok user with more than 4,500 followers and 500,000 reactions, published a tender video in which the protagonist is her mother and the famous Puerto Rican.

“I gave a Chayanne blanket to my mother”, is the audio that the tiktoker uses,“Open here, open here … I told you to come prepared”, it can be heard.

Immediately after receiving the gift, which by the way was well stored in a box decorated with photos of the singer, the lady begins to scream like an excited teenager and rushes to spread the cloth.

Quickly the mother of @danieladays covers her face with the blanket and looks for the face of the interpreter of “I would leave everything”, “Torero” and “A century without you” to give him a kiss.

The emotion that the woman transmits is such that Daniela’s followers did not wait and applauded the daughter’s detail:

“The mothers of all Latin America united.”

“It’s good that he loved it 😃🥺 I’m the girl who sold it to you, coincidence or destiny, hahaha I loved his reaction.”

“Get ready to be the favorite of the house.”

“My future son giving me one of Harry (Potter).”

“Here we are all children of Chayanne🥰🥰”.

“Oh, the husband who will also sleep with Chayanne 😂”.

Internet users agreed that the mother’s fury is widespread, as many women of that generation idolized the musician.

Chayanne was during the nineties and two thousand one of the most important public figures in the pop industry in Latin America, and his physical attractiveness, as well as charisma in the media, made him add millions of followers around the world, but not only because of her beauty, but because of her talent.

Recently Chayanne was a trend in social networks when considering that all Latin mothers would go to see the movie Sing 2 at the cinema just because he would give voice to one of the characters … and the rain of memes reached him.

This is how the new TikTok button will work; It is very similar, but not the same as Twitter

This wins Luisito Comunica only for YouTube; fortune has rained on him in the last month and strong criticism for “macho”