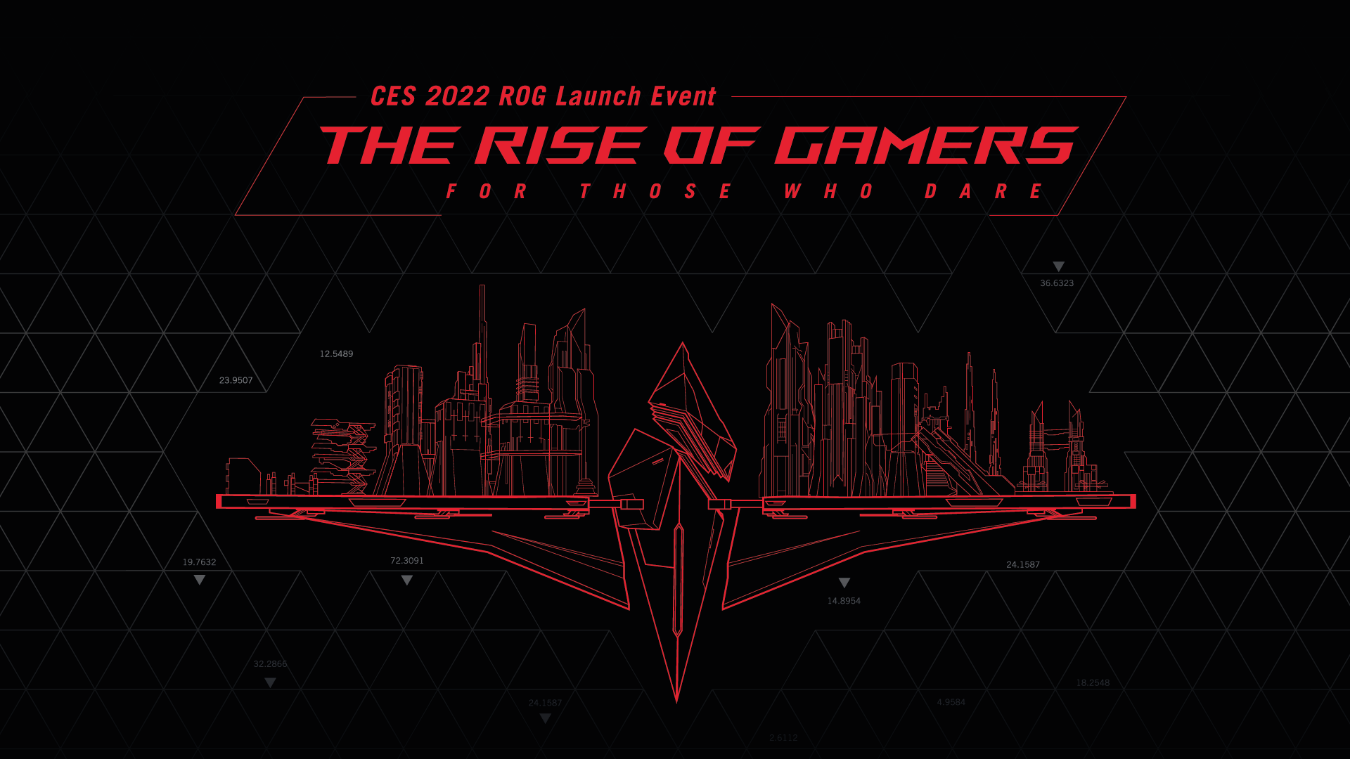 Asus Republic of Gamers (ROG) was present at CES 2022 and previewed a large number of devices designed for Gaming during its ROG: The Rise Gamers event. Know all the details in this note!

If there’s something we can’t doubt ASUS Republic of Gamers is that he always seeks to improve year after year and device after device. And it is that this company is always on the cutting edge of technology, offering the latest in hardware for fans of gamers or content creators. This year, Asus Republic of Gamers (ROG) was present at CES 2022 and during its event ROG: The Rise Gamers featured: a new operating system, new Intel and AMD notebooks, different form factors, new and updated, and much more.

Regarding notebook matters, ASUS unveiled the new Zephyrus Duo 16, Zephyrus G14 and Strix. On the other hand, it also presented its new gaming tablet Flow Z13 and announced a new free update to ROG Citadel XV, a virtual experience where players can explore all of the company’s new products. 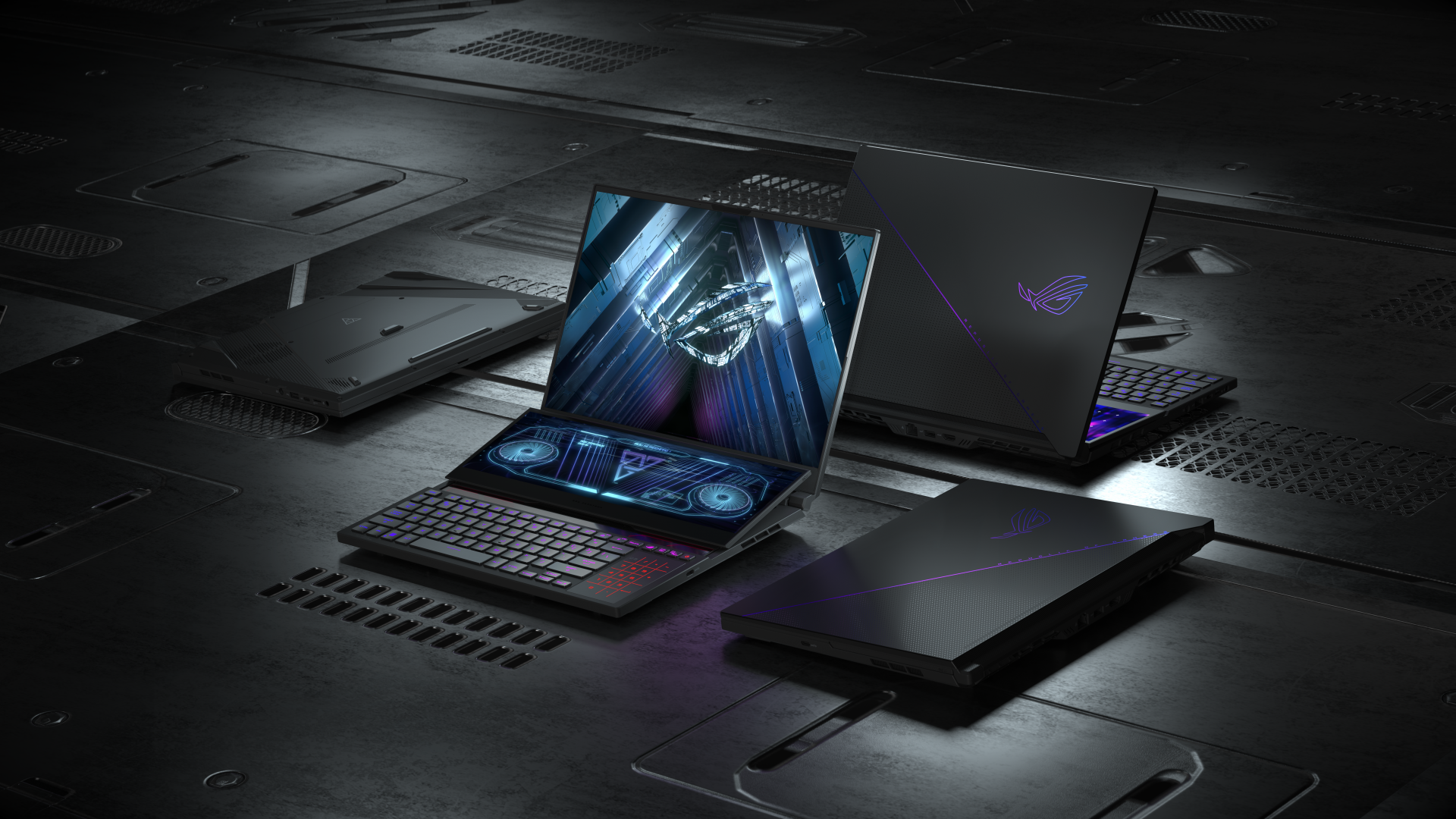 The ROG Zephyrus Duo 16 is undoubtedly one of the teams presented by ASUS that exceeds all known levels in terms of portability with dual screens. For one thing, the first screen is a 16-inch ROG Nebula HDR with 512 lighting control zones, a resolution WQUXGA (3840 × 2400) / WUXGA (1920 × 1200), 1100 nits of maximum brightness and a great level of contrast and color. This panel has a QHD resolution and 16:10 aspect ratio has a refresh rate of 165Hz and VES Display HDR 1000 certification, 100,000: 1 for contrast

As for the second display, this was developed in conjunction with BOE, and it is a new ScreenPad Plus screen exclusive to ROG called the Dual Specification panel. On the other hand, this display is equipped with Pixel Acceleration technology which ensures image scaling, according to the company, thus being able to toggle between 4K 120Hz and Full HD 240Hz settings, prioritizing between resolution or refresh rate, according to the title that is running.

Regarding the operation of the second screen of the Zephyrus Duo 16, this new version of ScreenPad Plus rises and slides back to bring it closer to the main screen. Thanks to its new four-way hinge design, the distance between the two panels is reduced compared to the previous generation, delivering a totally immersive experience with almost no bezels. Of course, both displays are compatible with Dolby Vision, offering great image quality.

The new ASUS laptop is equipped with Windows 11 and powered by an AMD Ryzen 6980HX processor and an NVIDIA GeForce RTX 3080 Ti graphics card. Both components have an enhanced liquid metal composite cooling system called Conductonaut Extreme which reduces the processor temperature by up to 15 ° C when compared to traditional thermal pastes. 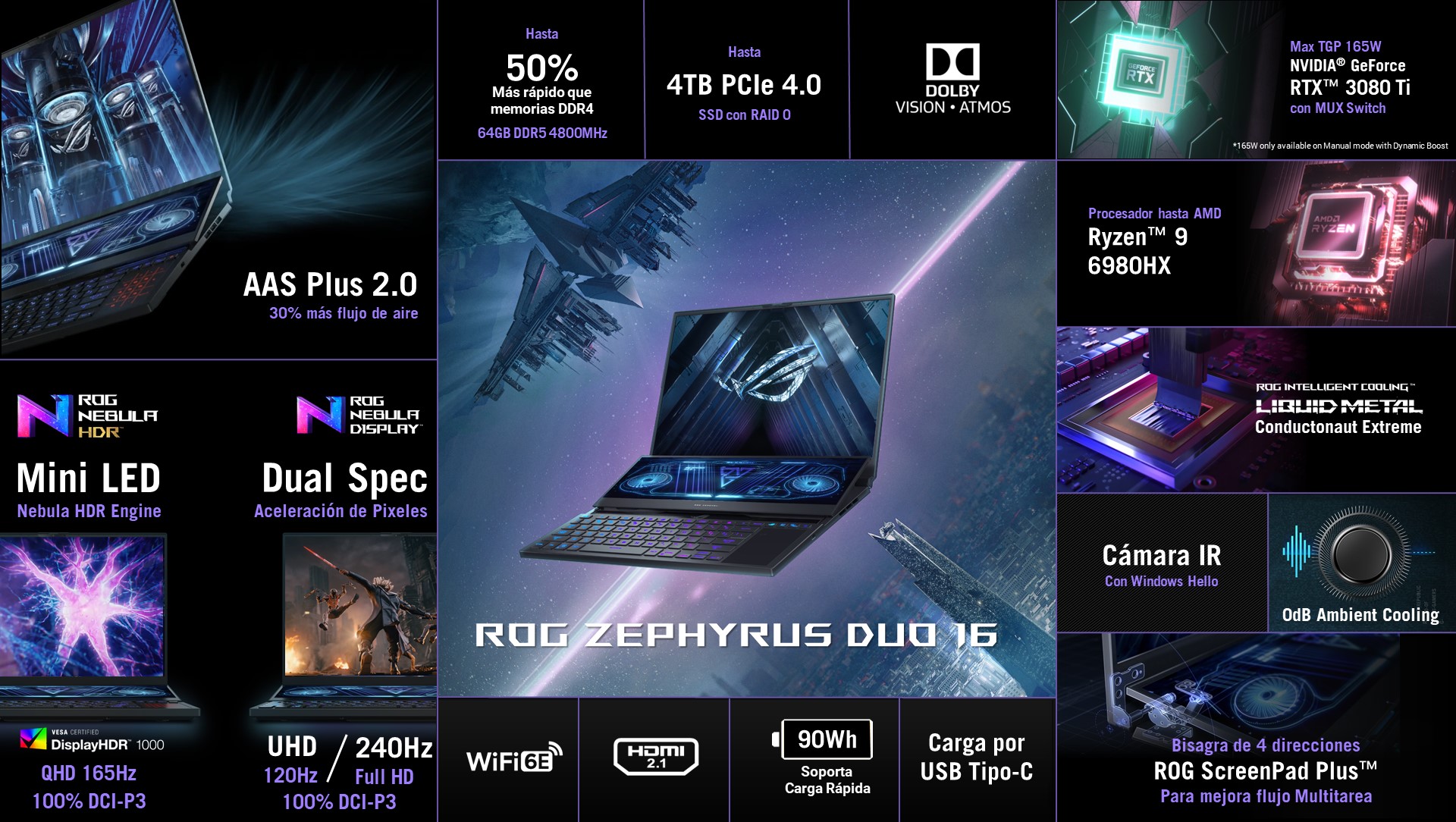 On the other hand, this notebook has an additional air intake created by the AAS Plus 2.0 system that lifts the second screen and offers up to 30 percent more airflow over the fans, allowing the high-performance components to stay cool. optimizing its performance. In addition, a MUX switch, ASUS reports, allows this device to reach its maximum level of performance in competitive scenarios, achieving high levels of FPS without problems thanks to a performance increase of up to 9 percent.

The Zephyrus Duo 16 It features ROG NumberPad technology on the touchpad, a keyboard with 1.7mm of travel and RGB per key, six speakers with dual force-canceling woofers, Dolby Atmos, Hi-Res Audio, and AI bidirectional noise cancellation. 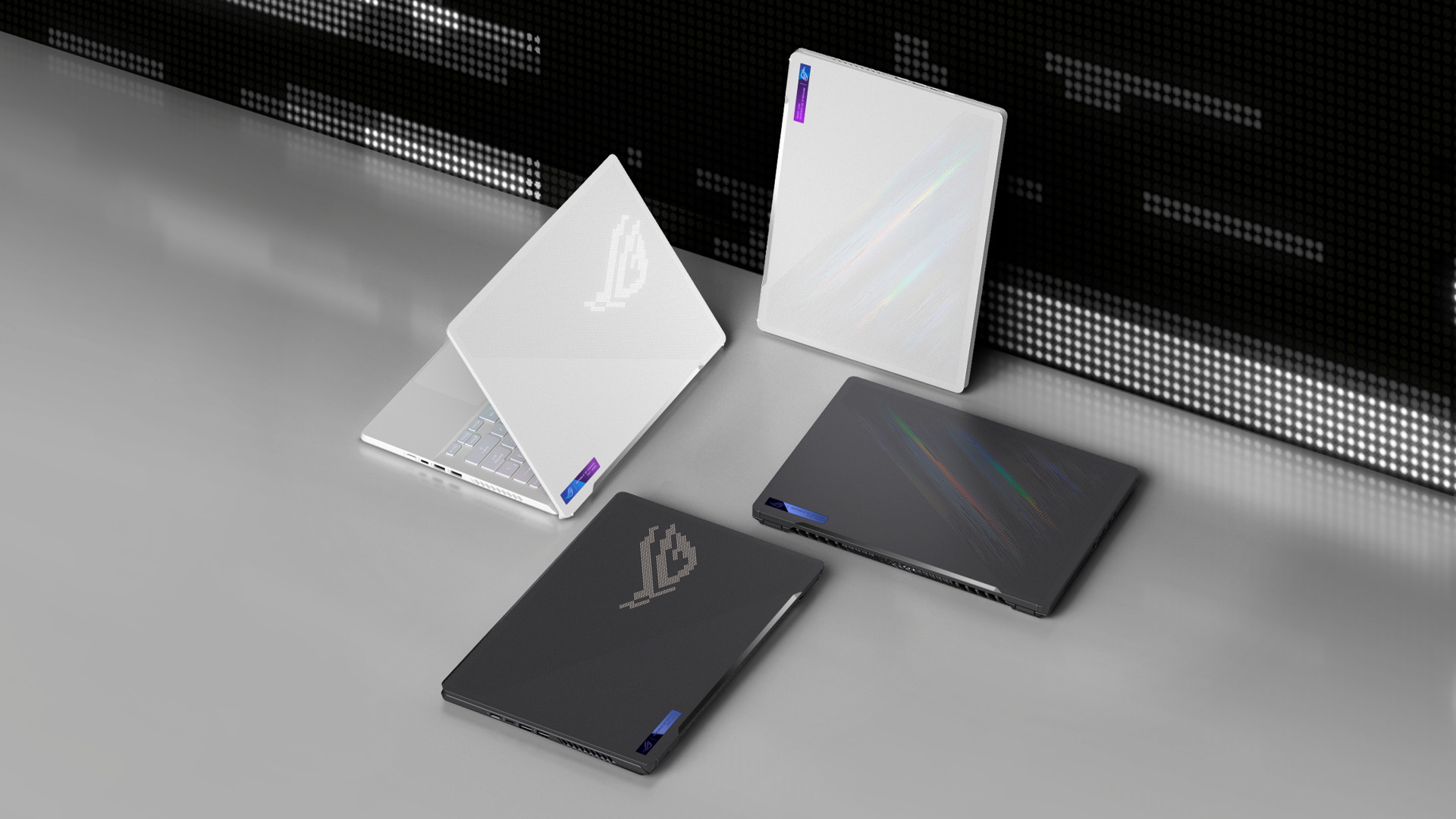 The second notebook that we are going to talk about is the ROG Zephyrus G14, a powerful gaming device that debuts a series of improvements. It is one of the first laptops from ASUS Republic of Gamers to introduce the new ROG Nebula display, offering 120Hz and QHD resolution with 500 nits maximum brightness, 100 percent coverage of the DCI-P3 color gamut, and 3ms response time. On the other hand, technology counts Dolby Vision and Adaptive-Sync, is Pantone validated, offering an immersive experience and accurate colors and expanded its aspect ratio to 16:10, increasing space without sacrificing portability by offering a 91 percent screen-to-body ratio. 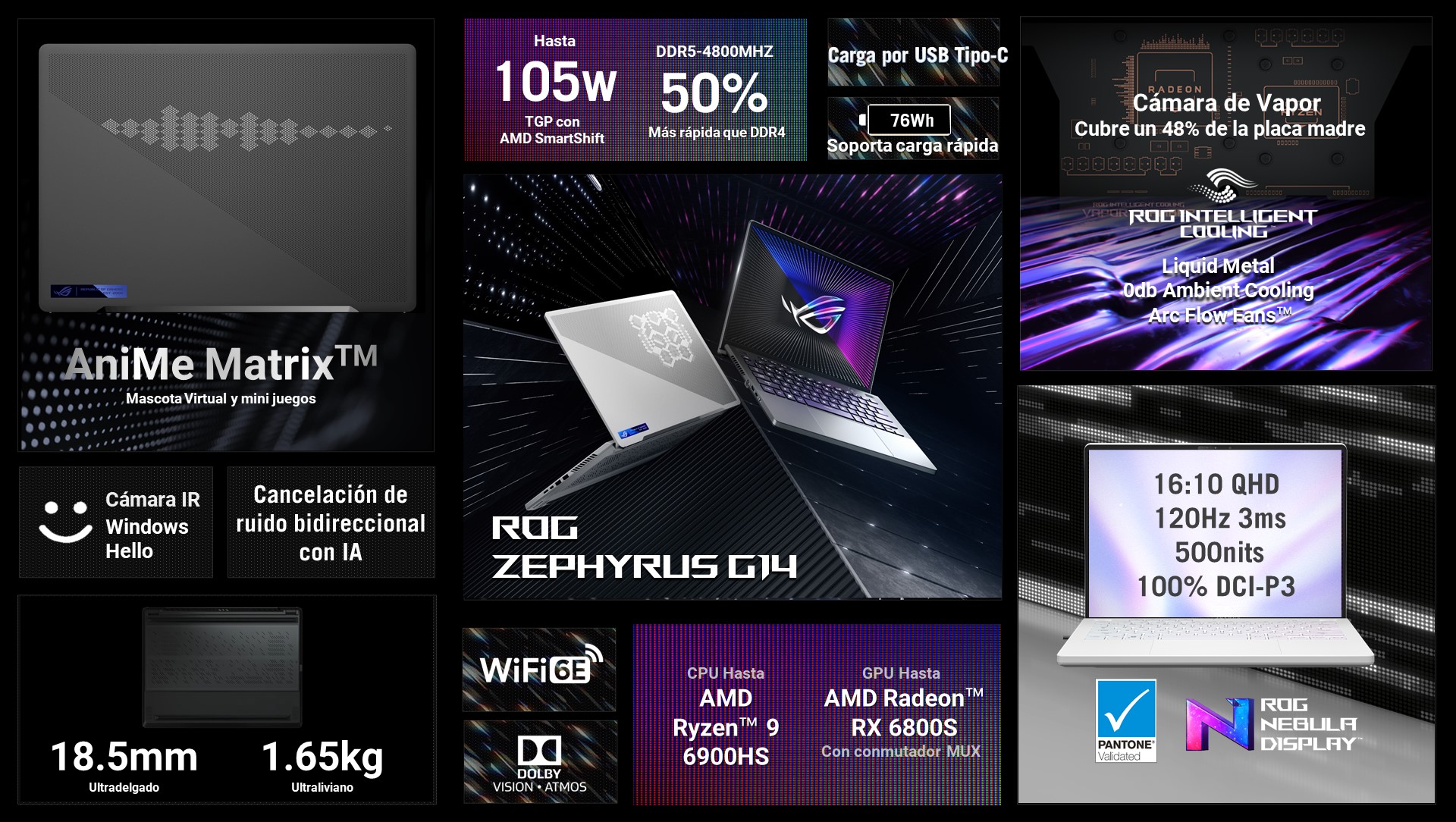 Read:  Assassin's Creed Valhalla draws up its roadmap with all the content and news that it will receive until the end of 2021

Engineered for premium power, the Zephyrus G14 is available in Eclipse Gray or Moonlight White, with the ROG logo embossed on a reflective, holographic-finished metal plate. The lid is covered with 14,969 precision-carved CNC holes under which 1,449 mini LEDs are found that make up the now iconic AniMe Matrix display – more than on last year’s model, creating new animation possibilities. that personalize the look of the laptop. 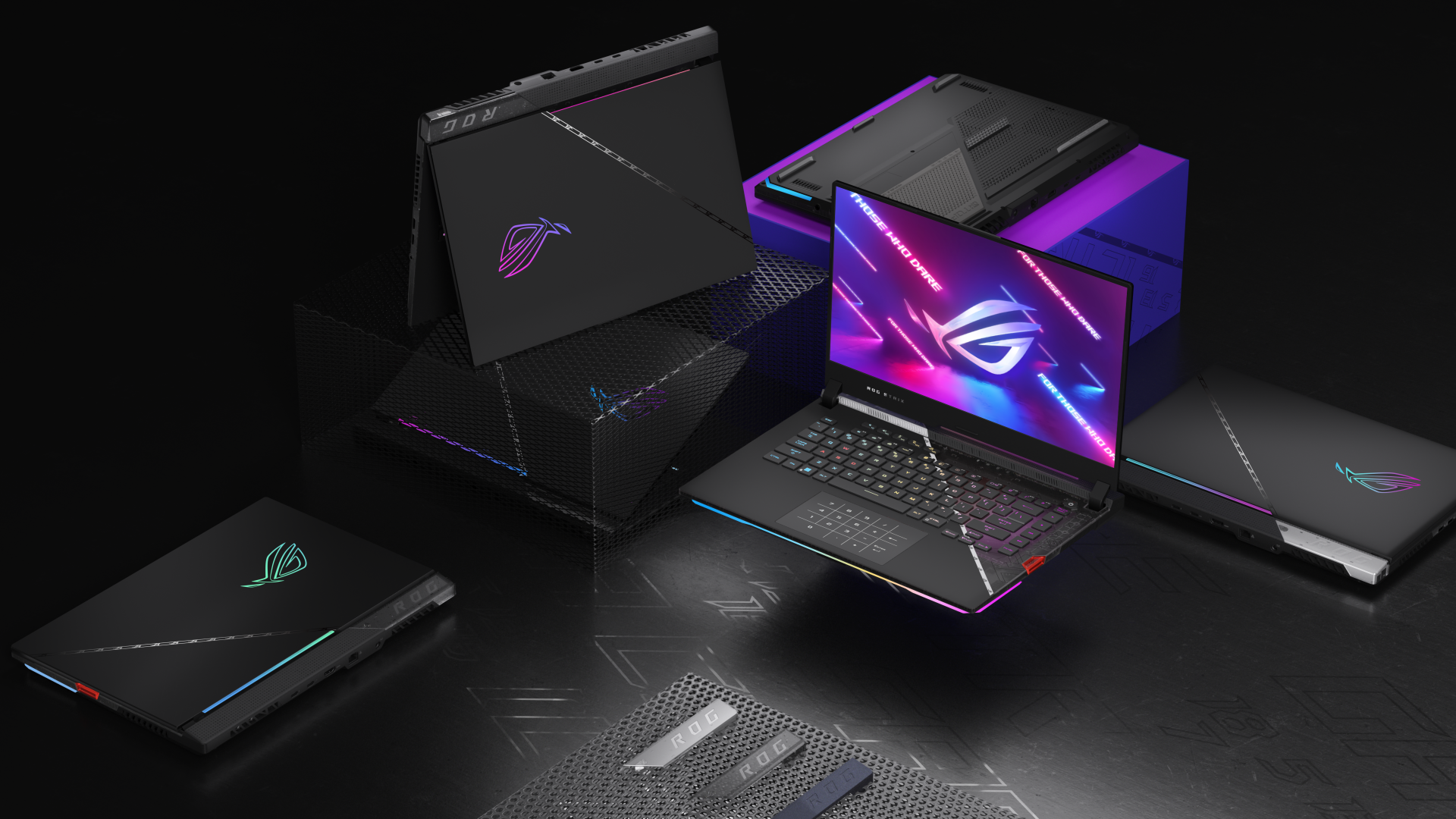 Another of the devices presented by ASUS Republic of Gamers (ROG) during CES 2022 was the ROG Strix SCAR, designed and thinking for esports enthusiasts, it is equipped with Windows 11 Pro, a highly updated display and ROG Intelligent Cooling with Liquid Metal Conductonaut Extreme. The heart of this device is a processor Intel Core i9-12900H accompanied by an NVIDIA GeForce RTX 3080 Ti graphics card.

On the other hand, the Strix SCAR is designed for high-demand games and has a MUX switch that guarantees top-notch GPU performance, according to the company. Its PCIe 4.0 x 4 storage provides short load times, its 3ms response time ensures clear and fast movement for gamers, and the DDR5 4800MHz RAM gives us the memory needed to multitask quickly and effortlessly. 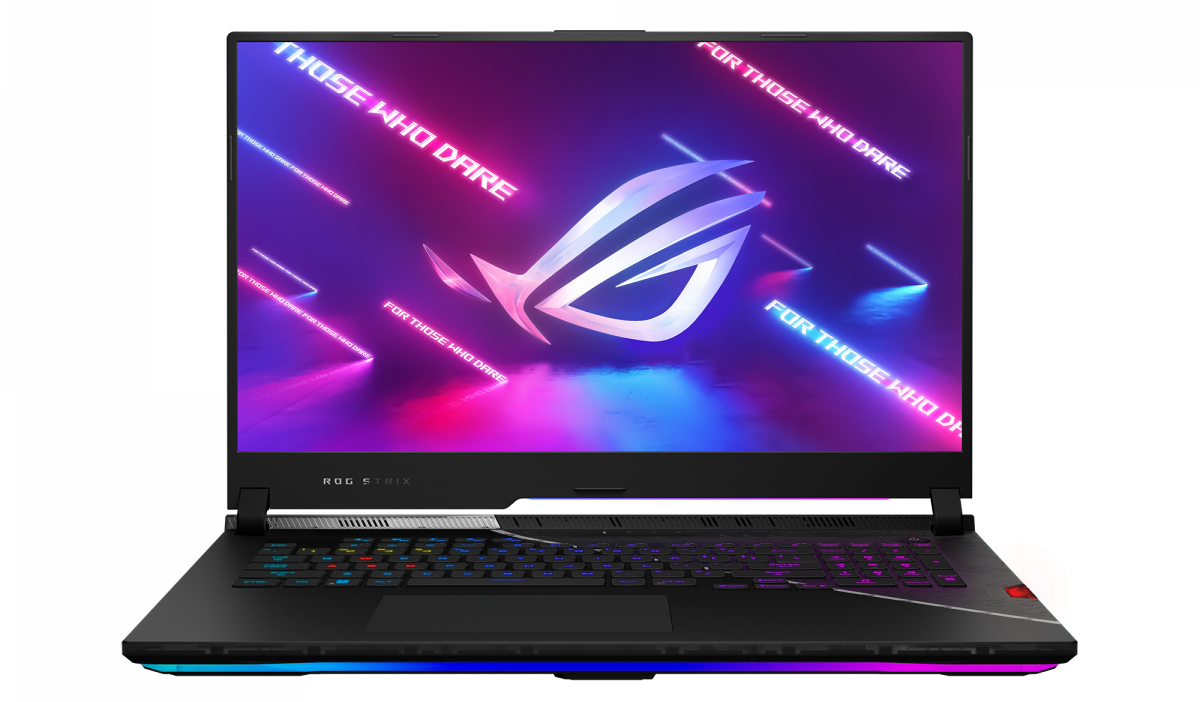 The Strix SCAR notebook is available in 15-inch and 17-inch models. On the one hand, the 15 ”version offers three IPS-level screen options: QHD 240Hz, Full HD 300Hz and QHD 165Hz; and on the other, the 17 ”model offers QHD 240Hz or Full HD 360Hz options. All Strix SCAR models are Dolby Vision HDR compliant and have Adaptive-Sync technology, providing stunning image quality without tearing or stuttering. 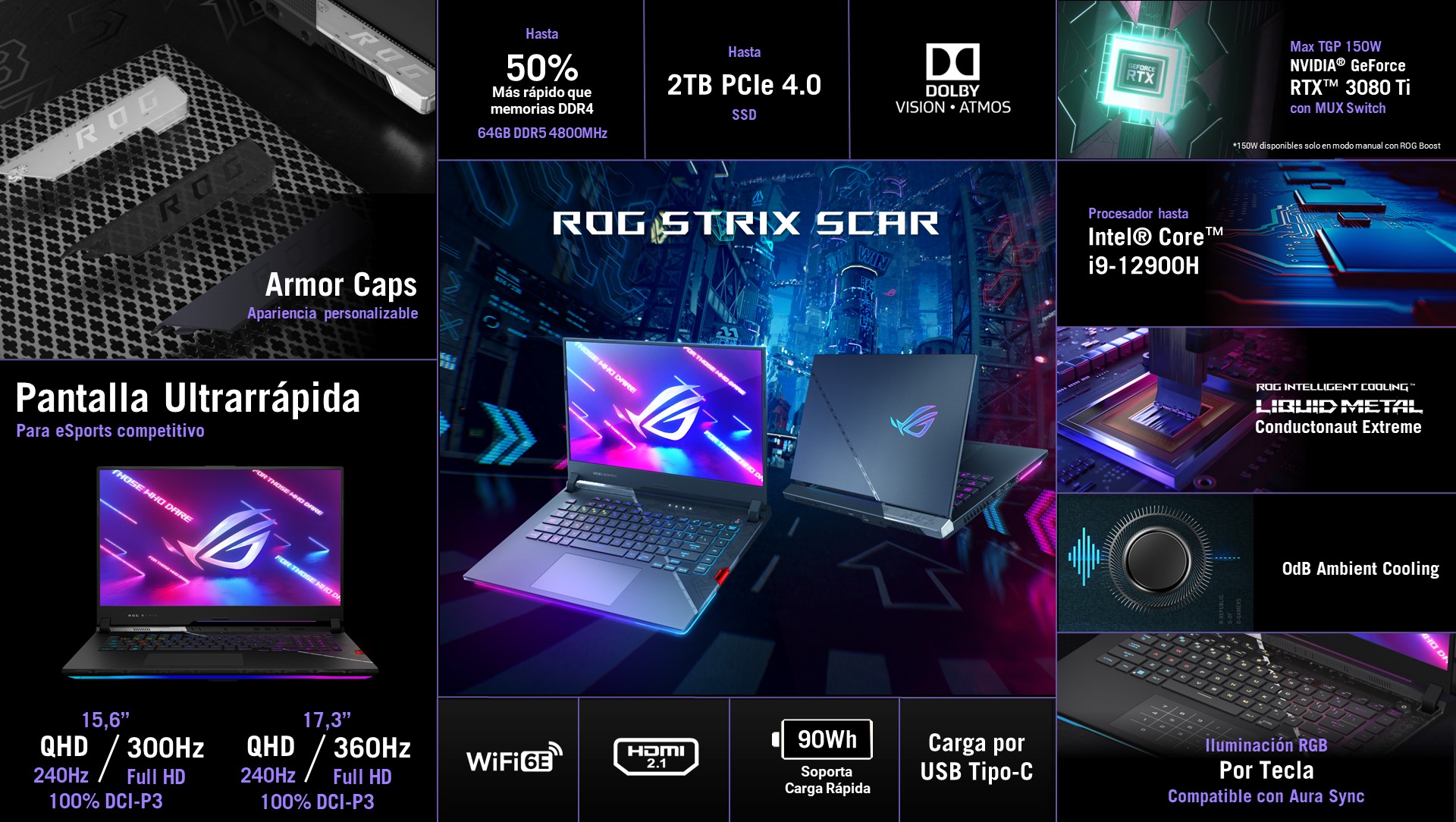 Equipped with a larger touchpad we will have a more detailed control of precision movements when not using a traditional mouse. This device features a sporty dot matrix design, Aura Sync-compatible per-key RGB lighting on the keyboard and lightbar, and customizable Armor Caps ensure gamers can show off their personal style. 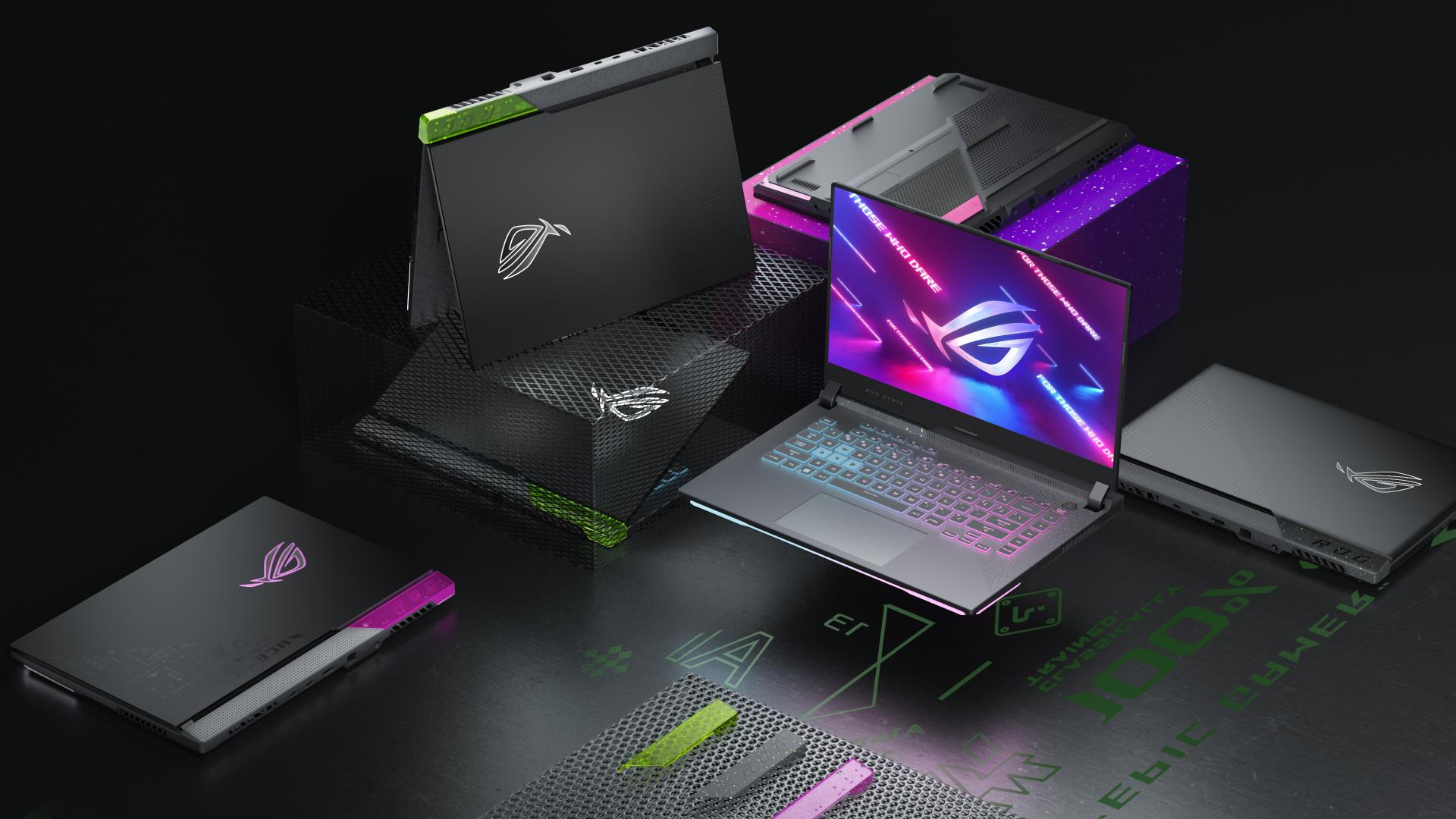 On the other hand, we have the new ROG Strix G15 and G17 notebooks, equipped with an AMD Ryzen 9 6900HX processor and an NVIDIA GeForce RTX 3080 Ti graphics card. On the one hand, the G15 model offers Full HD 300Hz and QHD 165Hz display options, while the G17 has Full HD 360Hz and QHD 240hz settings for competitive gaming. All Strix G models are Dolby Vision compatible and their displays come with 3ms response times and Adaptive-Sync technology.

Both Strix G models are equipped with four speakers and Dolby Atmos spatial sound, allowing us to have an immersive experience thanks to its surround sound, clear and realistic. Bi-directional noise cancellation with AI filters out background noise for incoming and outgoing communications, so everyone’s voice is heard loud and clear. 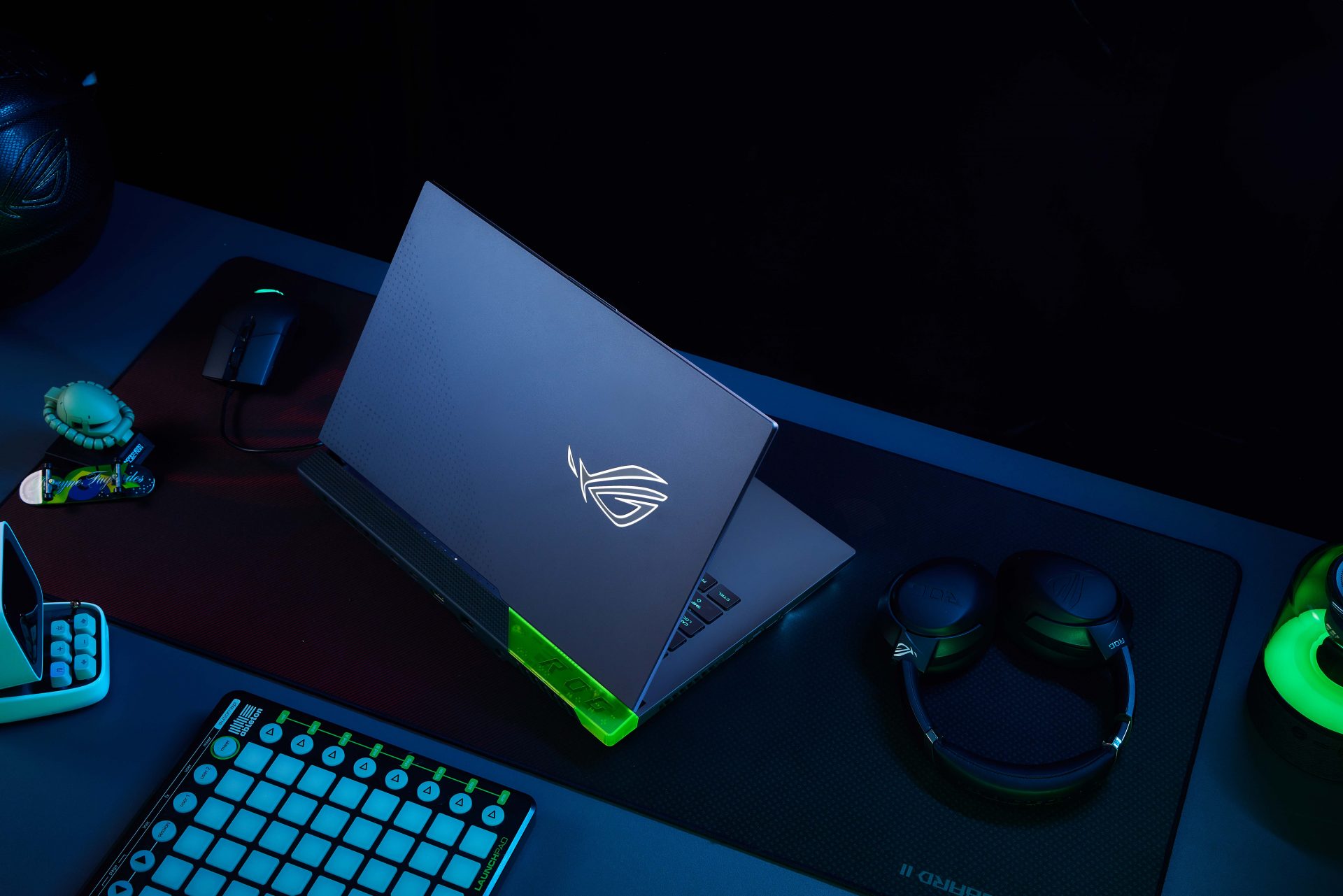 Lastly, these ASUS ROG laptops come with a 90 Wh battery that incorporates optional 100W charging via USB Type-C for use on the go. WiFi 6E and 2.5G LAN technologies provide state-of-the-art connectivity for minimal lag on wired and compatible wireless networks. 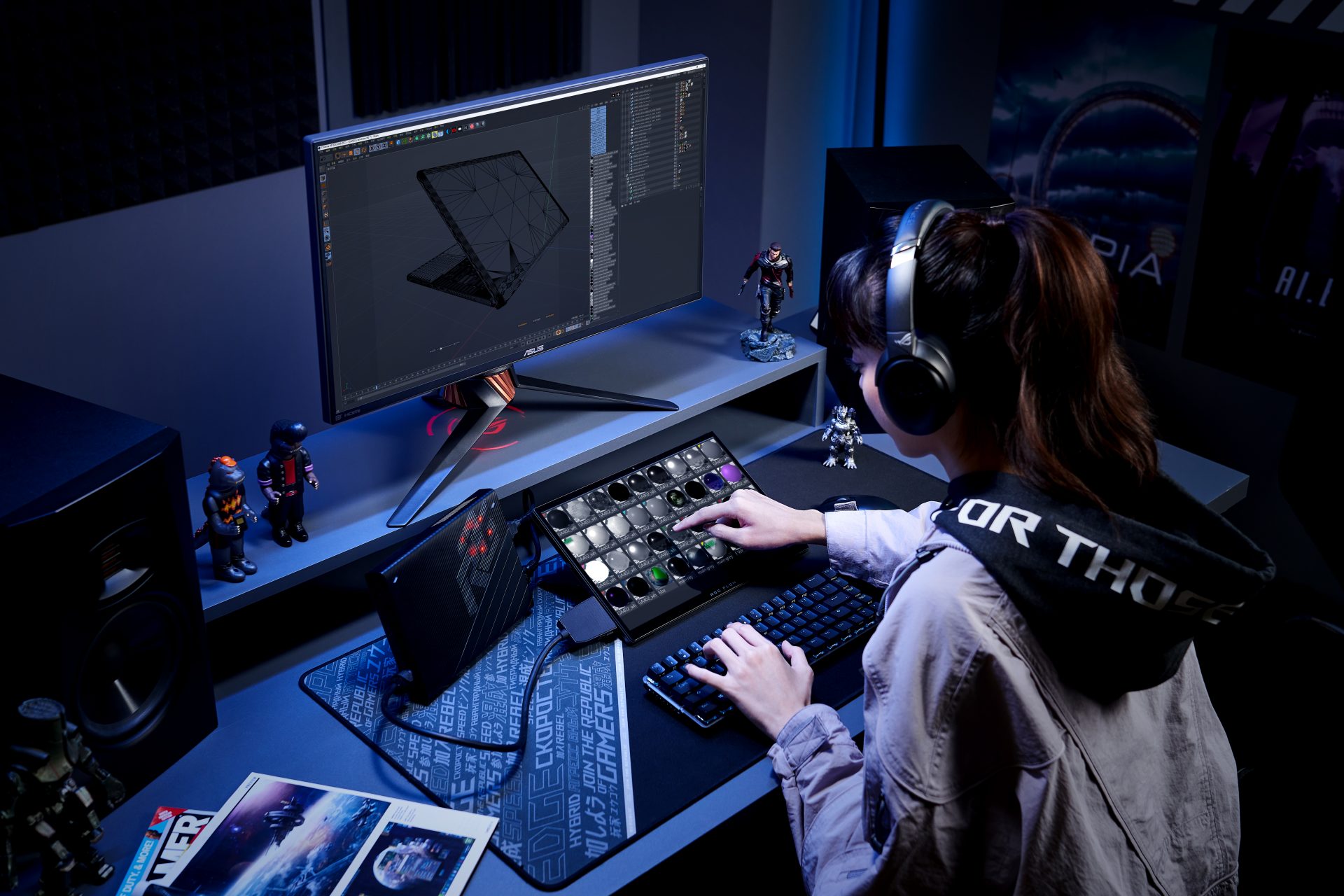 Finally we have the ROG Flow Z13 that expands the compact Flow series with the most powerful gaming tablet in the world, according to ASUS. With Windows 11, up to Intel Core ™ i9-12900H CPU, up to NVIDIA GeForce RTX 3050 Ti graphics and 5200MHz LPDDR5 memory, this tablet provides us with power in an ultra thin and light chassis. It features 1TB PCIe SSD storage, a MUX switch, custom vapor chamber cooling, and fast charging via USB Type-C.

The Flow Z13 has two panel options, on the one hand a 4K 60Hz display with 85 percent DCI-P3 coverage and on the other, a 120Hz Full HD display with 100 percent sRGB coverage. Both displays feature a 16:10 aspect ratio with Corning Gorilla Glass protection, Adaptive-Sync technology, up to 500 nits of maximum brightness, and Pantone validation for accurate colors.

The new tablet from ASUS, the Z13 allows us to play in several ways, either using a traditional mouse (using the keyboard on the included screen cover), with touch input or external controls. Thanks to your Retro-futuristic design inspired by the 20th century, but with the ROG vision for the future of gaming, and of course, maximum portability. This device has a CNC-milled window at the rear of the chassis that allows you to look directly at the motherboard of the machine, in addition to giving it that necessary dissipation to maintain performance. Additionally, the built-in stand can be opened up to 170 degrees for optimal use in almost any setting. 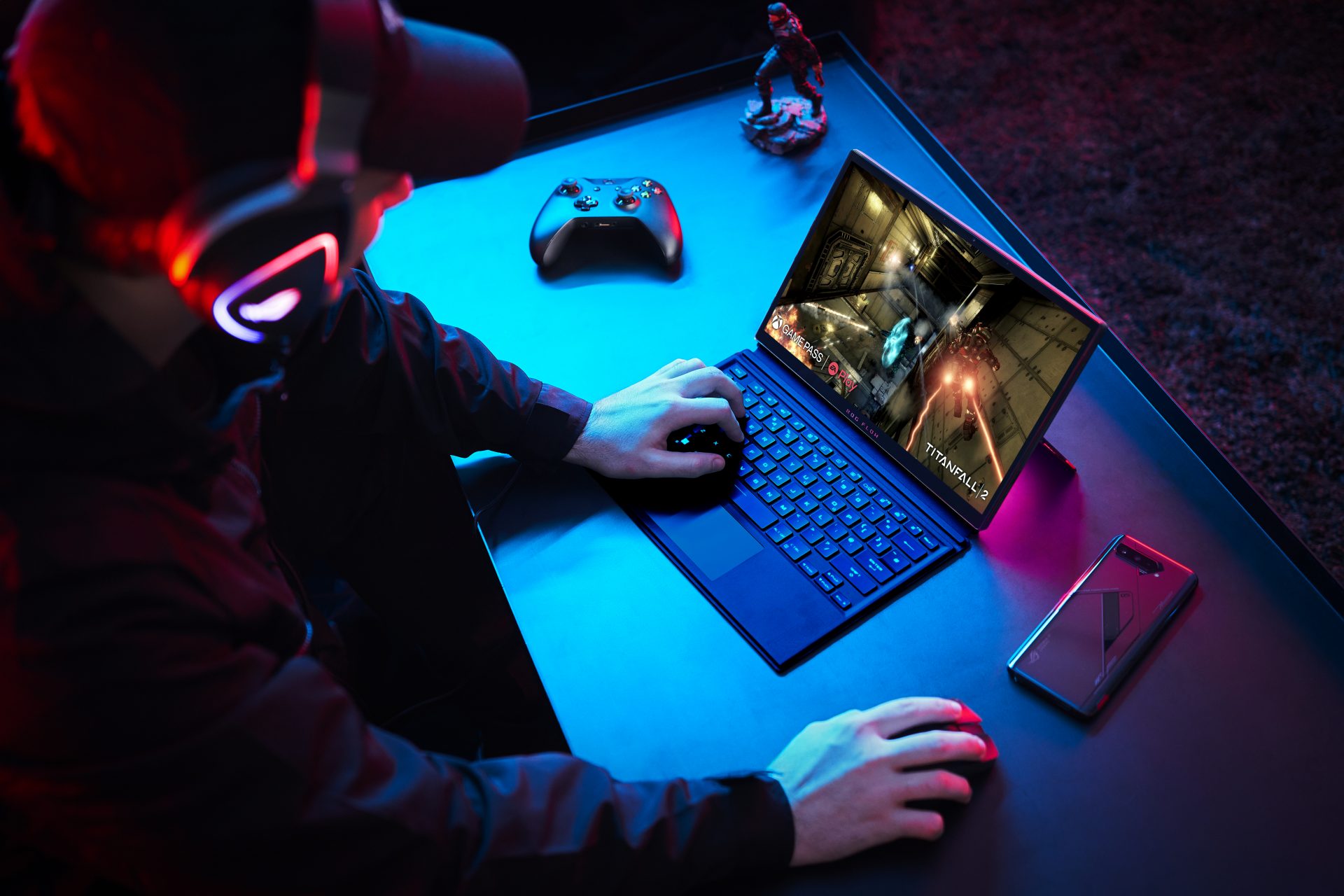 The 2023 Porsche Panamera Facelift is spotted with new details

Nintendo Switch a hit in Japan, sells 5 times more in 2021

The Queen and the Sea is out now, along with a spectacular animated trailer