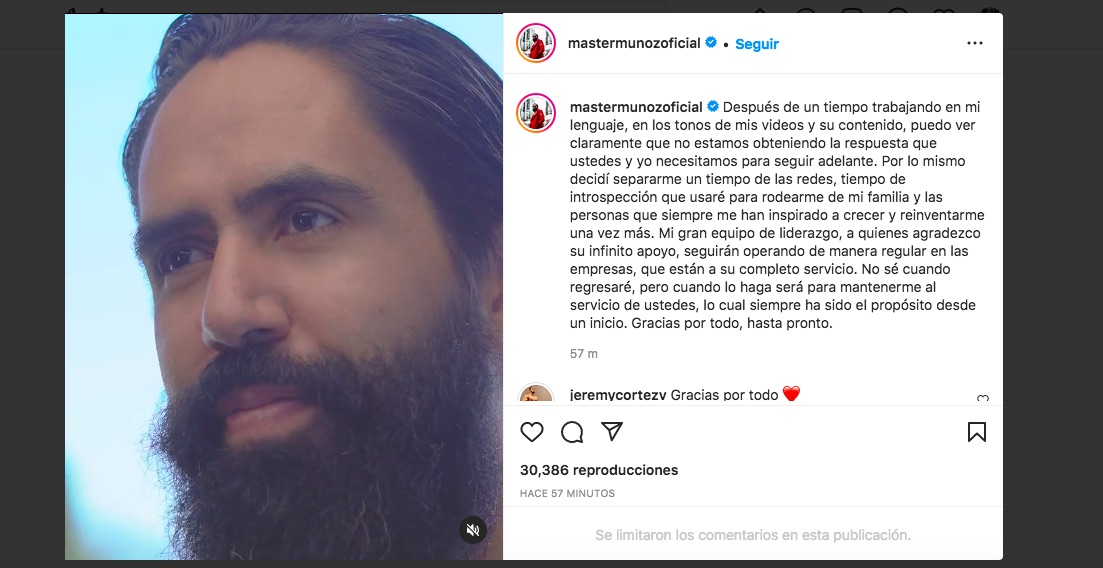 Carlos Munoz published a message on his social networks where he says goodbye to them and acknowledges that his character has fallen into excesses such as frivolity, with all kinds of content for which the way he expresses himself from employees, waiters who attend his lectures or being heavily criticized for his “fortune” or actual ability to operate business.

With a career built on social networks, now the influencer has shown how important the personal brand is and the weight that it has in networks, where the production of content and the prominence of narratives is definitive, which in their case led to his name to become a controversial personality.

Carlos Muñoz became one of the most influential personalities in the business content segment, with a special focus on entrepreneurship and with a “see you soon” he announced his decision to say goodbye to social networks.

Read:  The battle for the Metaverse began, 5 brands that are already winning

Muñoz published a video in which he confirms the interest with which he undertook in social networks, where he assures that his character fell into excesses such as frivolity, for which he made the decision to take a break to think about his next influence strategy.

The video has become viral on networks and it is an interesting measure with which we can study the complete matter of personal brands, fundamental today in everything we communicate on social networks.

“After some time working on my language, on the tones of my videos and their content, I can clearly see that we are not getting the response that you and I need to move forward.

For this reason, I decided to separate myself from the networks, a time of introspection that I will use to surround myself with my family and the people who have always inspired me to grow and reinvent myself once more, ”explained the controversial Muñoz.

The influence that the famous entrepreneurial influencer has had on networks has been multiple, but the most important thing to observe is how he has faced the controversies in which his brand has fallen.

Muñoz was recently criticized because an old video was popularized where he criticized a waiter who was attending one of his lectures. After a series of qualifications against the man, the method and purpose of the content promoted by Muñoz generated criticism against his personal brand, violating the value of everything he shares. At the time he offered to train the young man and the measure was successful, although as we see, his influence has waned.