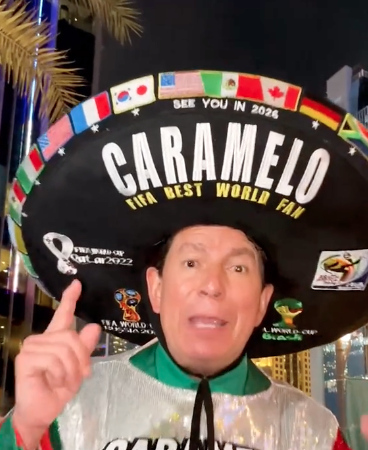 Caramelo is the number 1 fan of the Mexico National Team, since he has not missed a World Cup since 1986, he is currently supporting the World Cup in Qatar, hoping that the tricolor team will go far.

Mexico fought for its place in group C, against Saudi Arabia, where it won 2-1, however, despite that, it failed to qualify for the round of 16, a fact that had not happened since 1978, for which the tricolor team has been much criticized, in addition to the fact that many Mexicans affirm that Chicharito was needed in the World Cup, since previously in past World Cups he surprised with his annotations.

The Mexican team is worth 176 million euros, while the coach of Mexico, the Tata Martinez occupies the sixth place in being the best paid, since he receives 2 thousand 500 pounds a year, the coach of Germany, Hansi Flick he ranks first in being the highest paid with a value of £5,590,000.

Caramelo, the most popular fan in Mexico who has not missed any World Cup

Surely you have seen this popular Mexican fan, since he usually appears in the close-ups of the screens during the matches since he attracts a lot of attention for wearing the typical Mexican mariachi hat, he used to carry the title of Chihuahua before, however in this edition of the World Cup, the hat stood out with the legend “Candy“In the same way, his username on TikTok is”caramelomx“, has 500,000 followers and its content is about soccer, in addition to the fact that it has uploaded its experiences in the Qatar World Cup.

Read:  The shirt with which you can buy beer at the Corona Capital and the World Cup

His name is Hector Caramelo Chavez and he considers himself the number one fan of the Mexican National Team, since he has not missed a World Cup since 1986, he is currently 59 years old, which is why he has not missed the spectacle for almost 4 decades. world Cupas his hat says, is from the state of Chihuahua, Mexico.

He considers himself a fan since he was a child, since he remembers that he saw his father focused on the cameras in a 1986 World Cup match that was held in Aztec lands, for which he also sought to go out into the picture and clearly succeeded since he has become the most popular hobbyist.

He began by attending world held in Mexico, in 1986, where Argentina was champion, since then, has not missed any World Cup, even attended Italy 1990, in which Mexico did not participate.

In addition to his popular hat, he also attracts attention for his outfit, which is usually in the colors of the Mexican flag and in bright tones.

Candy did their best to support the Mexican team that was about to qualify to go to the next round, although unfortunately they were left out like the Arabian team, in group C Argentina and Poland managed to advance, the albiceleste team won with 2-0.

Only one goal was needed for Mexico to qualify, however, most Mexicans already expected this to happen.

Influencer day: the influencers of the World Cup in Qatar

Prior to Mexico vs. Saudi Arabia, Mexicans bring pozole to Qatar

Songs of “La Bamba” They sound prior to Mexico vs. Saudi Arabia