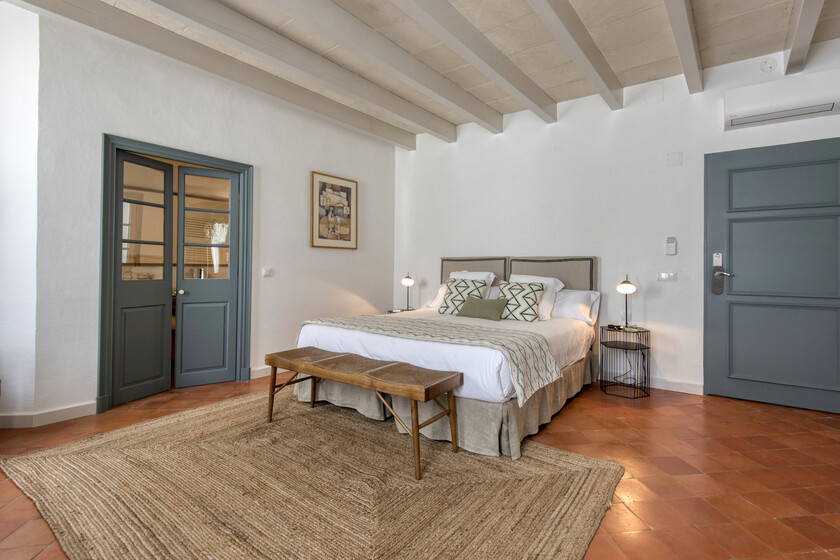 Can Albertí 1740 Boutique Hotel is, more than a luxurious hotel, the perfect destination for those who want discover the art of living in Menorca. Known for its iconic salmon colored facadeand built by the Albertí family in 1740, is located in the historic center of Mahón, forming part of the city’s historical and cultural heritage.

History, art and culture are at the heart of this incredible establishment that represents the Enlightenment architecture of Mahón in British times, and which has experienced an intense artistic life under the impulse of different members of the Albertí family.

Over time, the hotel has preserved the layout of its original spaces: its main entrance and grand staircase, reception rooms, spectacular courtyards and sophisticated rooms, and has been forged as a place of inspiration, relaxation and tranquility where you can feel at home.

Recently, the Can Albertí 1740 Boutique Hotel has been restored, of course, respecting its Menorcan style to the maximum and offering at the same time the most modern comforts. In addition, the current owners, Carole & Olivier Pecoux, a Parisian couple, faithful to the spirit of Vicente Albertí Vidal and to the many artists and men of letters who have stayed or worked in this unique residence, work to perpetuate the tradition of a space open to the world artistic organization, with the support of galleries, exhibitions of modern and contemporary art.

Can Albertí 1740 Boutique Hotel was built in the 18th century during the Enlightenment of Mahón. Although there are traces of the name Albertí in writings from the time of the reconquest of Menorca from the Arabs in the 13th century, it is not until the beginning of the 18th century when there are references to the lineage corresponding to the building that concerns us.

The history of this place begins with Vicente Diego Alberti Mercadal. Knighted on May 11, 1711, we can consider him the first patriarch in the line of succession directly linked to the building that concerns us today. His firstborn, Jose Alberti Carreraswas the one who promoted the construction of the building on Calle Isabel II, 9 in Mahón, who years later was able to see the completion of its construction, since he died in 1745. His great-grandson is the most important figure and the one who more records are kept: Vicente Alberti Vidal. Born in 1786, he was a man of letters to the end of his days. His greatest legacy is the translations made, especially into Catalan, of works by great authors of the 18th century illustration such as Goldoni, Metastasio, Molière, Beaumarchais, Rodríguez Arellano and Fernández Moratín, among others.

Despite the fact that Vicente Albertí Vidal died without issue, the legacy of the Albertí family continued for generations in the family home located at Calle Isabel II, 9 in Mahón, with prominent figures such as his great-nephew Juan Orfila y Pons, Deputy in the courts nationals and Provincial Councilor for Menorca, among others. The building was owned by the Albertí family until the second half of the 20th centurywhen it was separated into different parts.

With most of the original façade reunited, Can Albertí 1740 Boutique Hotel is today a boutique hotel located in the center of Mahón, where you can breathe the traditional air that impregnated Menorca in another timebut with a renewed spirit where art and hospitality go hand in hand.

Around the year 2000, the Can Albertí 1740 Boutique Hotel passed into the hands of a group of friends who shared different artistic disciplines such as photography, design or architecture and that they transformed the residence into a guest house, opening its doors to the public. In a certain way, they followed the legacy of our protagonist Albertí.

Since 2016, under the impulse of its new owners, very open to artistic and cultural world, has been restored in its entirety meticulously respecting its spirit that makes it so unique. Today, this luxurious residence, in which art is one of its protagonists, adds, solely and exclusively, 14 rooms: Cozy, Deluxe, Deluxe with patio, Suite and Suite with terrace; distributed in three floors.

Cozy: There are three rooms. They evoke one stately home in the center of Mahon for its high ceilings, its wooden beams and its old terracotta floors. On an area of ​​between 20 and 26 square meters, the nude tones that make them up, cause a state of calm and tranquility, perfect for enjoying a good rest.

Deluxe: There are three rooms. Located on the second and third floors of the hotel -some of them in the attic-, their remarkable luminosity and its ample space. Equipped with all kinds of comforts: shower and bathtub or in some cases, an Italian shower, or a very quiet patio where you can have a good breakfast and admire the sunrise, they always surprise with their magnificent view of the Governor’s Palace.

Deluxe with patio: There are three rooms. A large window gives access to a small private patio or to a rooftop terrace where you can enjoy a cool moment at sunset under the stars. Ideal to spend a weekend and fall in love with the island.

Suite: There are three rooms. They retain their original configuration and each of them remains as it was designed in the 18th century. They are characterized by being very spacious, as they are located in the old halls and other reception rooms. All are equipped to the detail to enjoy a really pleasant stay.

Suite with terrace: 45 square meters make up this one only suite with terrace located on the second floor. It consists of a bedroom and a small living room that can be converted into a bedroom for two more people, as well as a bathroom with a bathtub and a shower accessible from both bedrooms.

In addition, to enjoy the good weather, Can Albertí 1740 Boutique Hotel has a intimate patio in which to relax having a coffee or enjoying a good read, while, for those who prefer to have breakfast inside, the adjoining dining room is a safe bet.

Without forgetting, another charming corner: the large terrace in its dazzling rooftop that invites you to relax watching a magnificent sunset over the bell towers, the old houses and the beautiful Port of Mahón, -the second largest natural port in Europe-, with its numerous islands in the distance.

Some of the links in this article are affiliated and may bring a benefit to Decoesfera.