Bullfrag
Home Update Can a cocoa cream be healthy? 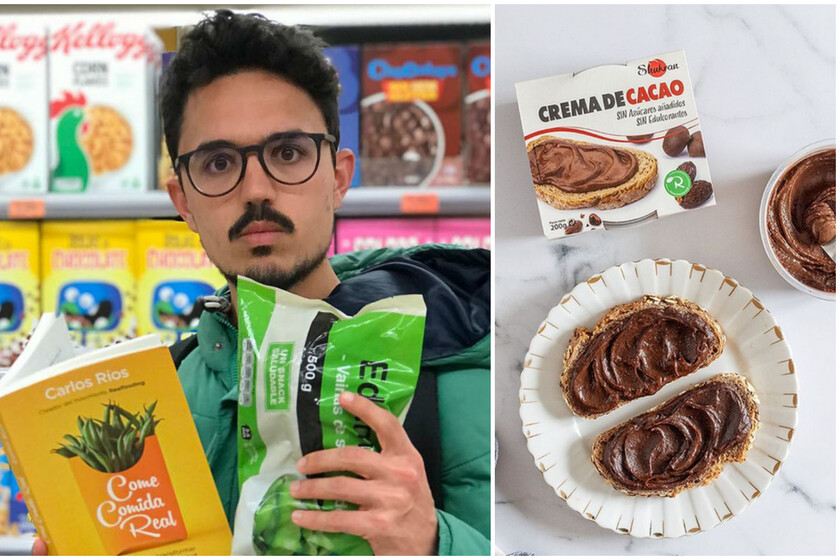 Thursday, October 7, 2021. A day that stops the nutritionist Carlos Rios “Marks the beginning of a REVOLUTION in our food system.” The reason? A cocoa cream “without added sugars” and “without sweeteners” has been presented, manufactured by the Shukran Foods company that bears his signature.

“We are going to develop more good processed together with @shukran_foods and other manufacturers of real food in our country to beat the ultra-processed ones, ”says Ríos on his Instagram profile, which is followed by more than a million and a half people. “We are going to show that a healthy and pleasant diet is possible. Because the most important thing is quality ingredients, food at the service of people’s health, under this mission we will create the realfooding supermarket ”.

Ríos presented his cream in a Alcampo supermarket, in which large queues formed among the followers of his “movement”, the realfooders, that they took the signed cream. Since he introduced the product, hundreds of thousands of followers have celebrated his arrival, but some of his fellow nutritionists immediately raised the alarm: the product, they say, is incorrectly labeled.

Index hide
1 No added sugars?
2 “Change the industry from within”
3 Between processed the game goes
4 The future of ‘realfooding’
5 Direct to the Paladar Newsletter

“To put ‘no added sugars’ Legislation tells us that food cannot contain monosaccharides or disaccharides, or any ingredient added for its sweetening properties ”, explains the food technologist Beatriz Robles. “This means that we cannot add sucrose, glucose, lactose … But neither ingredients such as honey, panela, juice, concentrated fruit puree, or date puree.”

As Robles explains, the food industry tends to add ingredients of this type in many products and alludes that they are adding it for another technological purpose which is not the one to sweeten –because it gives color, texture or adds fiber–, which allows them to circumvent the legislation. But it is that Ríos himself recognizes in the packaging of his cocoa cream that “the main ingredients are chestnuts, cocoa and dates, to sweeten naturally”.

“The moment you declare that you use it to sweeten you are skipping this part of the legislation,” says Robles. “It is that he openly declares itThat is the technological purpose ”. The label also does not include the percentage of dates contained in the product, which, in Robles’ opinion, should be indicated since “it is highlighting these by means of a graphic representation.”

Carlos Rios, in conversation with Direct to the Palate, defends itself against the accusations: “The clear date that has a sweetening power due to natural sugars, like the chestnut, but is one more ingredient. What we are looking for with this cream is a final result, which is as healthy as possible and is palatable. The date also provides fiber, proteins, antioxidants, texture and color to the product, it is one more ingredient in the formula ”.

The labeling of the cream specifies that chestnuts, cocoa and dates sweeten naturally.

“Change the industry from within”

Robles published on Instagram his doubts about the labeling of the product and Ríos himself answered him, asking him to “declare your conflicts of interest so that people know where this absurdity comes from.” Right away, says Robles, she received a barrage of messages from Ríos’s followers, who described her as work for the industry –Although, in reality, he works for media such as The country or RTVE-.

“There are large multinational companies that are going to lose a lot of money with this launch,” says Ríos

On Instagram, his main means of communication, Ríos has described the criticisms of Robles and other nutritionists as “A reaction from the ultra-processed industry”. But there are already many who have amended the plan. And not just when it comes to labeling.

For Ríos, “you don’t have to be very smart to know that there are many economic interests behind “. In his opinion, “everyone can have their own criteria”, but its purpose is “to make people eat healthier” and “there are large multinational companies that are going to lose a lot of money with this launch.”

Between processed the game goes

The cocoa cream of Carlos Rios it is no worse than many others on the market. It may even be the best. The problem, according to the nutritionists consulted, is that a food that is neither of the two is trying to pass as healthy or unprocessed.

“The worst food choice is the one you make mistakenly believing that it is healthy,” says Robles.

“The worst food choice It is what you do mistakenly believing that it is healthy ”, explains Robles. “It is what the industry always wants. Because you are going to eat them convinced and if you are not aware that it is a mistake you are not even going to try to change it ”.

In the end, according to Revenga and Robles, a cocoa cream is a cocoa cream, just as a cake is a cake, no matter how good the ingredients used to make it are. “It is as if we make pastries in our house, where we control the quality of the ingredients and the quantities, but the food you have at the end is a sponge cake, a cream or a cake, extremely palatable, which has free sugars, and is an imitation of some products that are already on the market ”, points out Robles. “It’s not better, it’s a little less bad.”

Read:  This is how artificial intelligence helps create video games

The product is also being promoted by a well-known character who has built a media empire on the basis, precisely, of criticizing ultra-processed foods; even going so far as to write “ultra-processed” in hundreds of posts on Instagram from companies that advertised one or another launch.

“If we can make pizzas that remove palm oil or refined flours, we will do it,” says Ríos.

In recent times, it has also been very belligerent with the Nutriscore labeling, which does appear voluntarily on its cocoa cream. In this system the classification A is the highest, but, as Revenga explains, in other classification systems it would be worse off: in the Nova system it would be labeled as “ultra-processed” and the Chilean authorities would place a warning, “High in sugars”.

For Ríos, it is important to offer the population processed foods that are healthy and improve what is available in the market: “The objective is to obtain a range of products that improve the existing ultra-processed, changing the ingredients and creating good processes. The objective is to change the food system and that is why we want to create a supermarket by introducing new products that make people change. And for people to change and stop buying those unprocessed creams You can’t persuade them just by saying to eat lettuce healthy alternatives must be given within a context in which we recommend basing the diet on real food. If we can make pizzas that remove palm oil or refined flours, we will do it ”. 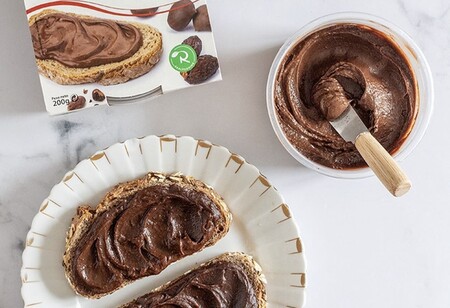 Carlos Rios He is a dietician-nutritionist, but also, as he often defines himself, “creator of the Realfooding movement”.

In just a decade, this man from Huelva, who has just reached his thirties, has built an empire around the Realfooding brand that includes personalized nutrition consultations, a mobile app that rates food, two best-selling books published by the Phaidon publishing house and all the work that surrounds a influencer –Including the collaborations with brands, which are counted by the dozens.

In just a decade, Carlos Ríos has built an entire media empire

The appeal to the consumption of “real food”, with proclamations such as “More market and less supermarket”, there is nothing new. Most of the messages that have made Ríos famous can be found in best-selling food outlets such as The detective in the supermarket, from Michael pollan, published in Spanish in 2009 –Ríos opened his Instagram account in 2016–, and much earlier in academic settings, which have been warning of the pernicious influence of ultra-processed products on our health for decades.

The controversy began to surround Ríos when radicalized his message, criticizing not only companies that manufacture “shit” foods, but also people who have not yet seen the light and continue to consume them, something that, some psychologists warned, could contribute to promoting eating disorders (ED) .

“He came to make duos of Tik Tok videos of people who eat caloric things criticizing them without anyone asking, pointing out all the calories they are eating …”, he explains Liliana fuchs, companion of Direct to the Palate. “All of this fosters guilt, obsession and a bad relationship with food. It is a breeding ground for TCA. It seems that the only problem is being fat and that all the evils are in the industry. He said that the ultra-processed ones are the cause of TCA, when from experience I know that one thing has nothing to do with the other. I binged on fruit, oatmeal and nuts, for example, and never entered my house pastries or sweets or snacks”.

“I understand the success of the movement, and it must be valued, because in a part it may have made people aware of the problem posed by ultra-processed in our health, but at the same time, from what I know, from outside, I think it is taking certain sectarian overtones that can be worrying ”, concludes Robles. “A series of ideas that always revolve around his figure, as if they were his own messages that no one else had ever given. And his followers no longer buy the message, they stay with what he says with that message.

Cocoa cream is not the first processed product to bear the Carlos Ríos seal. He already tried it in 2020 with a cocoa cream baptized as Ambrosía, which also had dates, manufactured by the Palencia company Paleobull, that continues to sell it but without the Realfooding seal. Since then it has endorsed other products such as a mutabal, a hummus, a gazpacho or a guacamole. All of them products manufactured in collaboration with the food industry, to which Ríos wants to continue selling his seal – last week he was at Fruit Attraction, the largest fair in the fruit and vegetable sector, looking for new customers.

“We are going to give visibility and support to these healthy products so that people can consume them, we are going to change the food industry from within “, concludes Ríos.

Images | Realfooding
On Magnet | The empire of “realfooding”: two million followers and private consultations at € 60
Directly to the Palate | Diets, why one day they say one thing and the next another: this is how the complex science of nutrition works

A news anchor in New Zealand appears with a tattooed face

Super Hero will bring back some classic villains