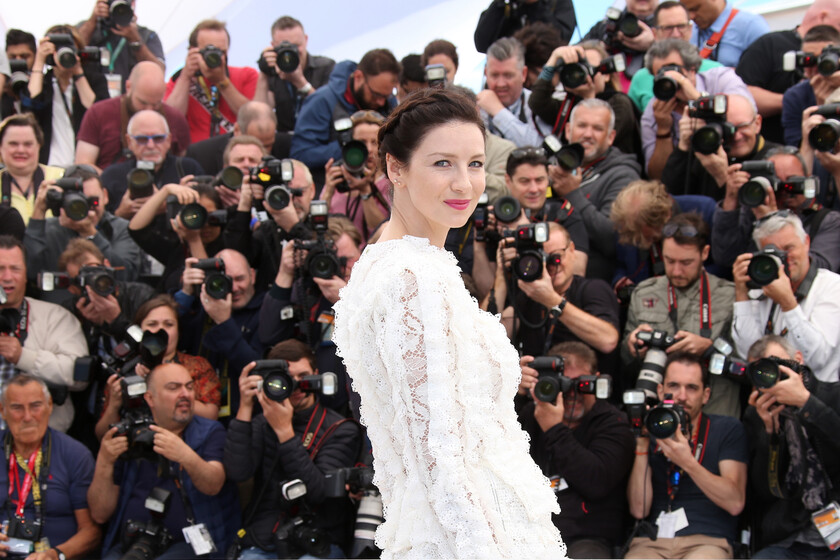 If you are a fan of Outlander You may already be familiar with the name of Caitriona Balfe. The protagonist of the series based on the saga of novels by Diana Gabaldon not only triumphs on the small screen: she is about to premiere his last film ‘Belfast’ -directed by Kenneth Branagh-, his style in real life is impeccable. So much so that her looks are still cool even over the years (and the appearance of new trends). Today we take a look at the best outfits seen on the red carpet and in the street style.

The easiest way to raise a total look full of logos

The rage for logomania comes and goes, however the actress shows us that a total look full of logos can be perfect even to go to the office. Signed by Stella McCartney and in conjunction with the coat, this outfits borders on perfection.

Mini dresses are her strong point for day events

We have one thing clear: the actress does not hesitate to wear short dresses (aka mini) for daytime events. Printed, single color or in a different fabric, each of its options continues to captivate us despite the passing of the years.

There is one thing that is clear to us when reviewing the actress’s outfits on all her red carpets: no matter how many years go by and new trends (or designers) appear, Caitriona’s style never goes out of style. With original silhouettes, different patterns and groundbreaking fabrics, each one of her proposals continues to make us fall in love today.

The actress chose to wear this striking Stella McCartney design to attend the European premiere of ‘Belfast’ as part of the BFI London Film Festival 2021 (Photo: Gtres)

The red carpet of the Golden Globes 2017 dressed her with a design by DELPOZO (Photo: Gtres)

The actress at the premiere of the fifth season of “Outlander” in Los Angeles with a vintage Chanel design (Photos: Gtres)

There are trends that come and go, however there are others that have been around us for a long time. It is the case of garments cut out where the actress has been showing us throughout all these years that these details are perfect for stepping on a red carpet (or being the perfect guest).

At an event in LA for the second season of “Outlander” in 2016, the actress dared to wear a dress with ruffles and cut-out details by Jonathan Simkhai (Photo: Gtres)

The cut out heart-shaped details added originality to this sequin-lined dress signed by Dundas Couture by Peter Dundas during the 2019 Oscars Vanity Fair party (Photo: Gtres)

In addition, there is a bold silhouette that defends perfectly. In strapless and skirt with a balloon silhouette, these designs are different, groundbreaking and full of elegance.

Caitriona Balfe attending the premiere of the second season of ‘Outlander’ in 2016 with a design by DELPOZO (Photo: Gtres)

The actress on the red carpet of the Golden Globes 2019 with a Moschino design (Photo: Gtres)

We hope that it will continue to delight us with this elegance for many (many) more years.