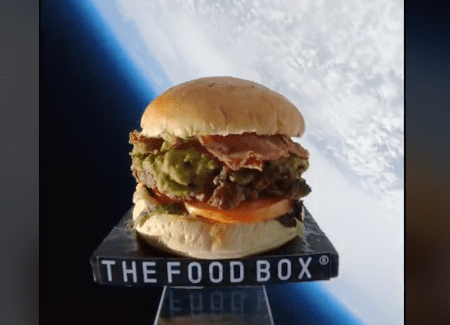 The Food Box has chosen to “send a hamburger into space” and give the best publicity to the brand, attracting the gaze of users.

The Fast-food restaurants They have proven to be of vital importance for today’s consumers, who have a wide range of products to satisfy their hunger or cravings through not-so-healthy alternatives. Among them, we can find different brands that are dedicated exclusively to the sale of their respective star product, such as Little Caesars with pizza and Kentucky with fried chicken, but hamburger franchises have also achieved an important position at the international level. world.

According to the graph shown by Statista on the market share in hamburger restaurants in MexicoMcDonald’s managed to predominate with a 45.4 percent presence, Burger King with 19.7 percent, Carl’s Jr. with 18.4 percent and Wendy’s and Sixties with 6.5 percent.

Big Burger Franchise they have found in the Mexican market a strong growth opportunity; however, hamburger and fast food businesses that are not of this caliber are also worth considering. but they also compete to monopolize their audience as much as possible, having to increase their investments in quality, marketing and advertising in order to reach as many customers as possible.

The Food Box is a restaurant dedicated exclusively to the sale of hamburgers (and other dishes of this nature), who have chosen to celebrate their ninth anniversary by “Send a hamburger to space”thus drawing the attention of Internet users.

@thefoodbox And 🤔 if we send one 🍔 into space? 🚀🪐 Commemorating our 9th anniversary we send one of our burgers into the stratosphere to conquer space. Thank you for these 9 years with us! #burgers #pot #spacex #elonmusk #burgertokchallenge #Mexico #burgers #space ♬ Talking to the Moon – Bruno Mars

This advertisement for hamburger “traveling” to space has generated endless positive interactions, causing comments such as “is it the ‘FLDSMDFR’?”, “if you could send it into space, surely it can send one to my house”, “the day a hamburger overthrew the argument of millions of flat earthers ”. Despite this, there are some other users who did not fully believe the advertising and mention that it is actually a green screen: “I almost believe it”, “you can see the green screen”, “at the end look down of the platform and you will see the screen”, among other thoughts that cast doubt on this fact.

Read:  NASA discovers a different world, where the wheel of time moves from Earth

During the last years, different companies and institutions are focusing their efforts to enter the spaceexciting the population worldwide about everything related to topics out of this world (as SpaceX and Blue Origin have shown), causing more and more brands to choose to carry out some advertising campaigns focused on this theme, within their respective possibilities.

An example of this we could even see with Uber Eats, who sought to venture as the first food delivery app to deliver to space, sending a delivery man to deliver Chinese food to the astronauts of a space station, attracting the eyes of the world and causing different companies to choose to integrate their advertising efforts towards this market.

The spatial theme manages to take the consumer’s perspective out of their daily livesthus attracting their attention and offering companies a good opportunity to carry out creative advertising strategies.

Chart of the Day: Financial Losses from Internet Crimes Increase