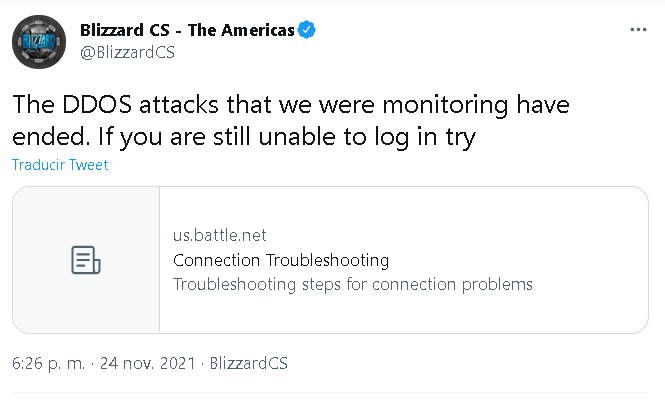 Blizzard was recently the victim of a cyberattack, which was related to denial of services (DDoS), which overcrowded the company’s servers, preventing users from logging into Battle.net.

The coordinated attack, according to Blizzard, is over and now all users will be able to log into Battle.net normally again.

TeleKwai is born, the ideal option for content creators

Index hide
1 Battle.net goes down and users lose their minds
2 What happened?
3 A problem that did not affect everyone
4 What is a DDoS attack?

Battle.net goes down and users lose their minds

For nearly an hour on Wednesday, November 24, most users experienced severe problems trying to log into their Blizzard account.

The main games that presented the most serious problems were Overwatch, Call Of Duty: Warzone, Heratstone, Diablo online functions and more.

Various users on Twitter, Reddit and other social networks began with a barrage of memes, as well as complaining about the various problems that this was causing.

Through Twitter, Blizzard stated that the problem was caused by a massive DDoS attack, where it added the element of “Breaking News”, with the intention of calming down its followers.

In this same notice, the company commented that the servers were under attack and it was not possible to log into Battle.net, so they had to be patient and wait.

Users looking to log in had to wait more than 40 minutes to connect, since they were in a huge line to access their accounts.

At the same time, if you tried to log in during the attack, a warning like this would appear:

A problem that did not affect everyone

According to DownDetector, there are reports of some users who did not have a problem with this attack that Battle.net received, in addition to this evidence as well.

Experts assure that, the users who were able to log in, it is thanks to their ultra-low latency connection and massive disconnections from other gamers, that they could connect.

What is clear is that this interruption was not total and only affected countries or users with low quality internet, or little luck.

What is a DDoS attack?

In short, a denial of services attack is a series of breaches where a computer system or network causes a service or platform to be rendered useless, as happened in Battle.net.

This is because the main servers of some platform are saturated, to prevent real users from having access, this is mainly used to obtain information.

Probably, this attack was only the prelude to what cybercriminals are trying to achieve with Battle.net and Blizzard, so that (hopefully and not), they manage to hack them and steal user information.