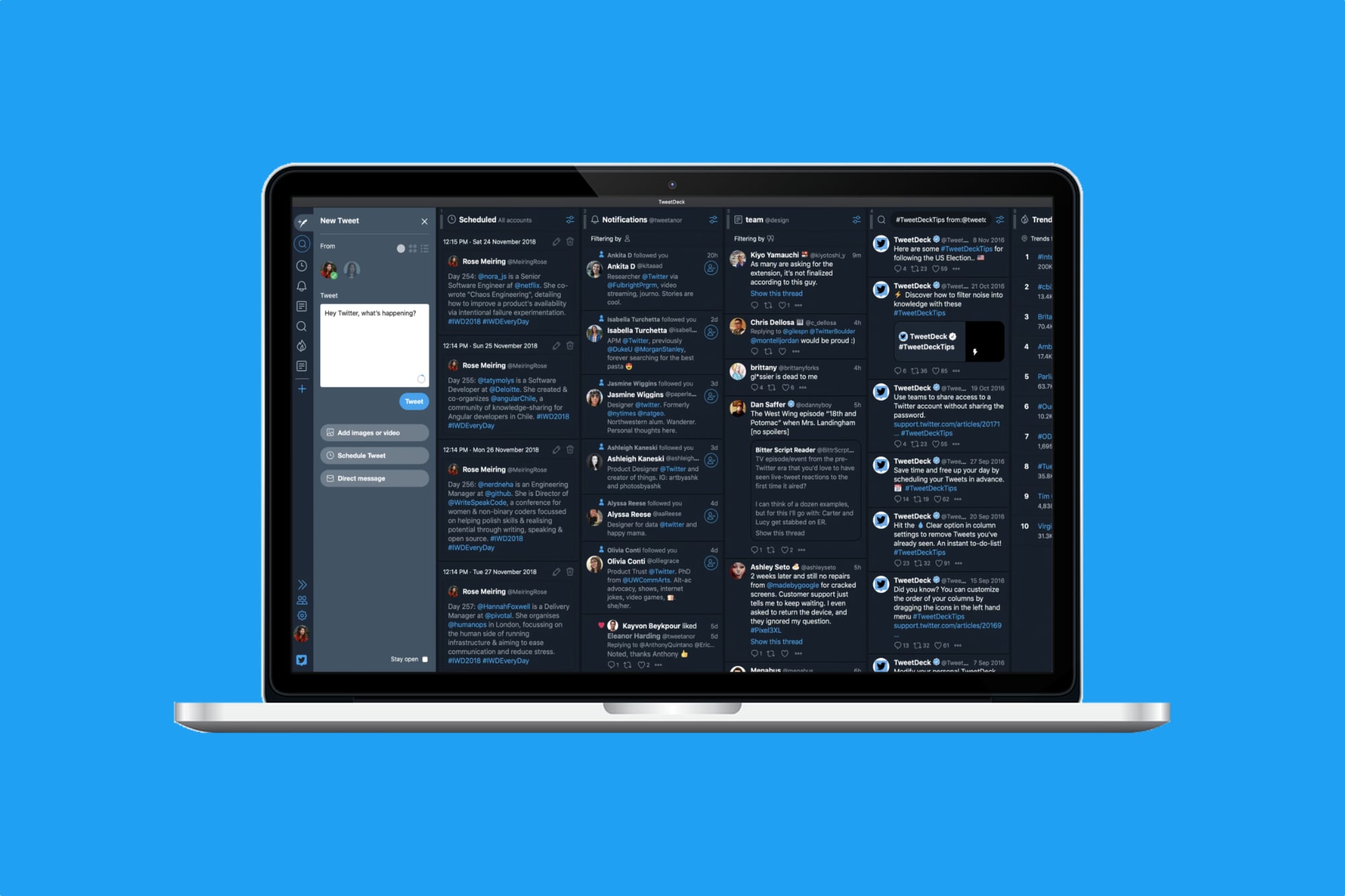 if you use TweetDeck to access Twitter from Mac, we have to give you some bad news. Starting in July, TweetDeck will no longer be available for Mac users. You may have seen a message informing you of this in TweetDeck itself. We do not know the reasons, but the consequence is that you will have to find another way to enter on Twitter if you’re using a MacBook, iMac, Mac mini, or any of today’s Macs.

TweetDeck has become one of the most complete clients for access Twitter. And without the need to install it. From the web. It became so popular that Twitter itself bought it in 2011 for $40 million. And it is that this client allows you to see everything that this social network offers in multiple columns and even introduced features that Twitter didn’t have until recently, like scheduling messages.

But everything comes to an end. The good news is that TweetDeck is not the only one of its kind. There are free and paid alternatives to use twitter from mac with all the functions you need at your fingertips. We propose the most popular.

It is inevitable to start this list with Twitter for Macthe official client of this social network. Maybe in your day you tried it and you didn’t like it. Or you just skipped it and went straight to TweetDeck for Mac. But the years go by and this official client has learned a lot from his brother.

Currently, the official Twitter client for Mac offers a minimalist interface but full of the essential and necessary to deal with messages, publications, retweets, polls and any other function that is on Twitter. In addition, you can use it in normal mode or in compact mode, choose between various background colors, etc.

The only downside that can be done to Twitter for Mac is that it is basically a encapsulated version from the Twitter website. On the other hand, this has the advantage that you will always have access to news of this social network.

But let’s get serious. What you want is to replace TweetDeck on your Mac with something similar. and here comes in tweet, a Twitter client based precisely on TweetDeck and that is difficult to differentiate due to its similarity: columns, a sidebar full of shortcuts and integrated functions for the most demanding users. In addition, it incorporates some other improvements. Another good news is that you can install tweet on Windows, macOS or use it as an extension in Google Chrome.

Read:  Elon Musk is the new owner of Twitter: what changes will come to the social network and why has the board now accepted the offer?

With tweet you can customize the size of the columns independently, download twitter videosfilter topics and users so that you are not bothered or spoiled by a movie or series… And so that you are always up to date, it integrates warnings and notifications and gets along with the MacBook Pro Touch Bar.

Available for iPhone, iPad and Mac, Neptune is a Twitter client that bets on minimalism. But this does not detract from functionality. On the contrary: it allows you to manage multiple accounts, explore trends, view the publications in chronological orderfilter topics and messages, etc.

In terms of its design, it is similar to Twitter for Mac but cleaner and more austere. Which doesn’t stop you from enjoying this social network without so much noise and simultaneous information as TweetDeck for Mac offers.

And if we talk about alternatives to TweetDeck for Mac, applications like TweetBot, which was born as a Twitter client for iPhone and that over time has made the leap to macOS. It stands out for its appearance, very careful, and for the possibility of using it in compact or expand it with columns that you can move and order at will.

It also highlights his reproductive care for you to see media content comfortably: GIFs, images, videos… And of course it offers filters to avoid topics and trends or, on the contrary, to find out everything instantly. To this we must add support for several Twitter accounts, synchronization with iCloud, etc. Otherwise you can try TweetBot free for a few days and then checkout. An option to consider if you spend the day on Twitter from your Mac.

Another classic Twitter client that started on iOS and made the leap to Mac is Twitterrific. Also paid, bet on minimalism and display everything in a small window with tabs. Although you can also open several separate windows for different accounts, topics or trends. to your liking

In addition to the separate windows, another outstanding feature of Twitterrific is that it allows you to customize the appearance of Twitter in fonts, sizes and colors. A way of make it easier for you to read if you dedicate time to this social network.