Bullfrag
Home Update Belgium conquers the ‘World’ of pairing with sherry wines based on mackerel,... 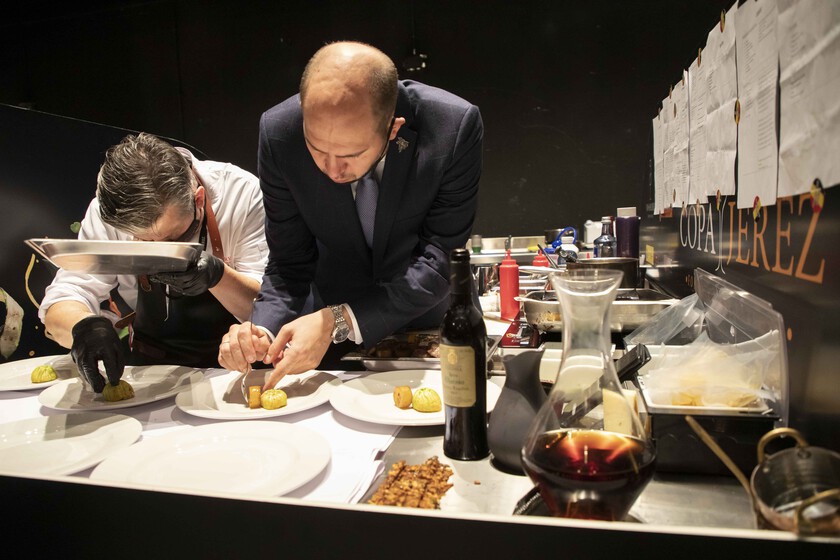 Although the soul of Jerez is lived in its tabancos at street level, where the Fino and Amontillado bustle, with the permission of Manzanilla from Sanlúcar, there are days when the most universal of Spanish wines dresses up.

That is the moment when the Jerez Cup, the World of gastronomy that puts haute cuisine and very old wines on the same plane, fills the Andalusian city with accents from numerous chefs come from all over the world to demonstrate how sherry pairs with all kinds of cuisines.

Eight restaurants, with sommelier and chef, and eight countries, present at a party in which to compete to seduce a jury that knows everything about eating and drinking. Or almost. The surprise is not easy for characters of the stature of Quique Dacosta (no less than six Michelin stars decorate him) or Josep ‘Pitu’ Roca, sommelier of the tri-star Celler de Can Roca.

It might sound like a joke when we put in the equation a Belgian couple, two Russians, two Dutch who also carry Michelin stars or a couple of Italians who have made their fortune in the United Kingdom. To this helping of culinary algebra too you have to put the Spanish touch, evidently.

On the one hand, from Venta Moncalvillo (located in Daroca de Rioja, the least populated town in the world with a Michelin star) or the ‘American’ touch that comes from Little Spain, one of the proposals that chef José Andrés has in New York,

From a salty sky bacon to the most ‘unmatched’ of ingredients

Chefs and sommeliers from eight different countries were in charge of competing for the Jerez Cup, the ‘food pairing’ World Cup.

At your whim and with absolute freedom. The only rule of the Jerez Cup is that the dish must be paired with a Marco wine. So they paraded through the Villamarta Theater, which parked the song, the opera and the fandango for a couple of days, to fill themselves with wine, steaming kitchens and inquisitive juries.

At complete discretion, the chefs could choose the ingredients they would like for their proposal (a starter, a main and a dessert) and the sommelier had to choose what to ‘dance’ it with in the glass, regardless of price or brand.

From the scallop and beet of the Danish proposal to the onion and cauliflower of the risky Russian flag, passing through peculiarities such as a bean soup (letter of introduction to The River Café, London) or the green display of Venta Moncalvillo, where chef Juan Pablo Stefanini dared to put the artichoke in dance, queen of non-pairing vegetables.

There was also a court to play with textures and for the salinity of the sherries to radiate. This is how Nicolás López, the chef from Madrid behind the New Yorker Little Spain, put it on the spot. white prawn, Iberian ham and tripe sauce to the Madrilenian they put the cañí touch.

All this with Sherry wine pairings as a safeguard of this culinary versatility, capable of proving that a smelly like the VORS of Bodegas Tradition he knows how to mate with a pigeon (the dane Alan Bates’s platazo) or that the same wine can be linked to an aperitif and a dessert.

The malleability of wine in all its splendor, as he put Stefanini next to his artichoke, potato and cheese, which contrasted with the sweet idea that Vincenzo Raffone (from The River Café), illustrated with a sbrisolona with Catalan cream, where the common denominator was the drink: Palo Cortado Apóstoles VORS by González-Byass.

A wine for every moment 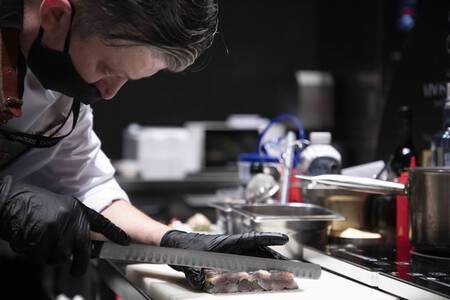 Covering Jerez is impossible And we are talking about a terroir that has made history with just one grape, the palomino fino. Rocked by time and by its aging, nothing imitates these wines -many of them centenary-, which paraded through the stages of the Villamarta Theater.

Dry, salty and sharp, but also with the opportunity to have a sweet tooth, somewhat fruity and very glyceric, the pairing options are eternal for a contest where the saying of “no risk, no glory” is well worth it.

It seemed that common sense was betting on the classic in crescendo of intensities. Finos and manzanillas, the youngest of the Marco wines, for starters. Six of the eight proposals were oriented to open their mouths with these organically aged wines, which they knew successfully navigate between the scallop of the Danish dish, with the trout that Librije proposed (a three-star in Amsterdam) or the humble roasted onion that aligned the Russian tandem.

From there, the frenzy. Seemingly sober proposals based on lamb that they proved that there is a life beyond the red, as they demonstrated from the Klinker restaurant (Hamburg), accompanying it with polenta; from Paul de Pierre (Brussels) giving margin to an Oloroso from Bodegas Gutiérrez Colosía along with a celeriac puree, or to the charcoal lamb from The River Café, which bet the drink on Amontillado 12 Years from El Maestro Sierra. 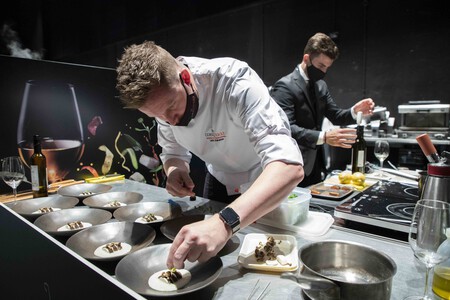 Trout and vinegar from Jerez en rama, part of the starter from Librije and its chef, Lars Aukema

Oxidative aging came out, from the amontillado to the oloroso, passing through the palo cut -that wine in the land of both-, which were able to elevate the earthy touches of the beet (the dish of Alan Bates, the Danish chef), of flirting with chard and cod tripe (with Palo Cortado La Saca, from Bodegas Altanza, an asset from Venta Moncalvillo) or to do well with the white shrimp proposed by Nicolás López, seconded by an Amontillado storekeeper José Luis González Obregón (from Bodegas Lustau).

Versatility of the sea, mountains and orchards, lots of orchards. As much as to prove that a fine like the Puerto Fino de Lustau can accompany a cauliflower, or as to demonstrate that a celeriac tart can be understood well with a chopped stick like the Great Duke of Juan Piñero, they are taste testimonies that the wine Jerez can do everything. 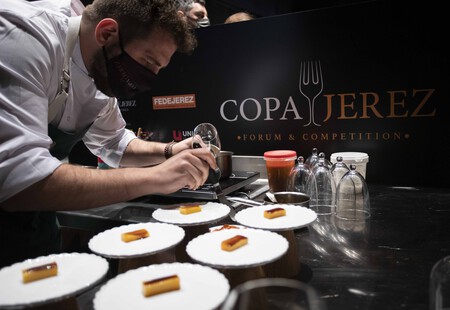 Of the salty flavors to gourmand counterpoints; from gelatinous textures to the most sophisticated cuts of meat and without ever forgetting the good predisposition they make with the smallest funds.

It’s consommé time and the chefs knew it, taking out the magic of its casseroles with reductions that only this type of wine can bear. This is how Nicolás López worked with an Iberian ham consommé jelly, 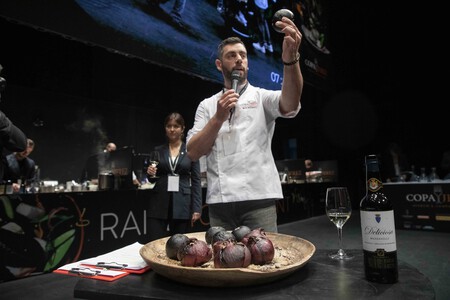 Mark Stasenko, chef of the Russian restaurant Selfie, presenting his’ forgotten onion and orange to the fire

With temperance and the very attentive jury, each pair of chef and sommelier had 10 minutes to explain the dish and the reason for the pairing, which in the desserts was resolved quickly, but not lightly for that.

It was time to bring out the great sweets of Marco de Jerez, the wines that are most exported from the region and those that are consumed the least in Spain. A curious nonsense that piles foreigners and that was the last great challenge of the day: sweeten without cloying.

The turn of the Pedro Ximénez grape, of medium wines, muscat wines and pale creams, the kings of the sweet pass that they sunbathe and ravage in these Andalusian lands. From what is known as a payoyo cheese cake, to what is international like plum and raisin (the Russian wink) until arriving to the challenge of adding spinach and pine nuts as a culmination (Venta Moncalvillo style) or the ‘glass’ and cigar that only lacked coffee in Paul de Pierre with a pear in tobacco syrup that paired with Ximénez Spinola’s Medium Old Harvest.

It can only be one 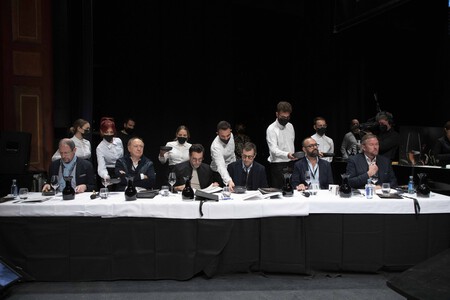 24 dishes and 24 pairings were coming to an end. The jury, attentive from the first hour, had to value not only the flavor separately, but also orchestrate the whole of a proposal that, as Pitu Roca, president of the jury, explained, “had a very high level”.

It was not an empty phrase. Neither because of the person he comes from nor because of his ‘boards’ in Copa Jerez. Of nine editions, it has been present in seven of them. His testimony is clear about this evolution: “I see more knowledge of wine, wineries and how to apply it to haute cuisine“, he assured.

With nerves on the surface, the prizes were to be expected. The most sought-after, the award for Best Pairing, but the categories of Best Sommelier and Best Chef are not far behind. Neither are those of specific dishes, such as the best main, best starter, best dessert or, as in any contest, the Most Creative Pairing.

Nevertheless, the risky proposal of Fabian Bail, restaurant chef Paul de Pierre, seconded by sommelier Paul-Henri Cuvelier he took the cat to the water in the Jerez night. 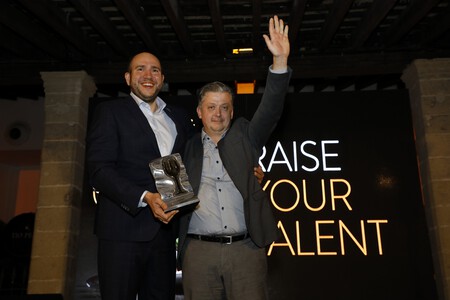 Paul Henri Duvalier and Fabian Beil, sommelier and chef of the restaurant Paul de Pierre, winners of the IX edition of Copa Jerez.

In the ‘Ben-Hur’ style at the Oscars, the Belgian duo swept away a proposal in which the mackerel, dashi broth, chorizo ​​and celery oil knew how to spin with fine Viña Corrales, anteroom of a more classic dish with lamb, hazelnut, celeriac puree and baked potato confit, provided by the Oloroso of Gutiérrez Colosía.

As a finale, the aforementioned pear in tobacco and spice syrup, that is completed with citric and lactic touches based on goat’s milk ice cream, perfect counterpoints for a sweet -and not sweet- wine such as Medium Old Harvest by Ximénez Spínola, whose pairings also earned them the Juli Soler award for Best Chef and Best Sommelier.

A 92-year-old woman dies in a fire in Mallorca

Redfall’s release date could be delayed, according to a rumor