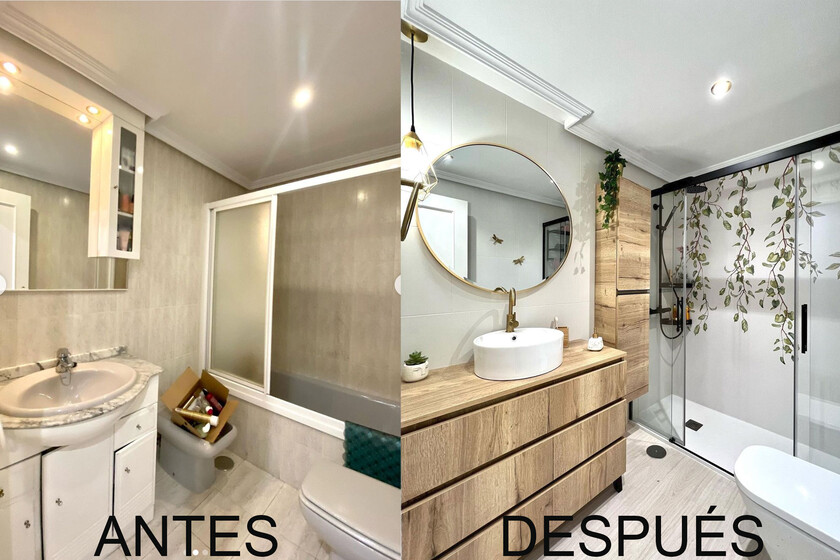 With this reform without worksEast bathroom it goes in a few days from having a bland appearance to having a look current and daring thank you to the vegetable print of the shower and the mixture of gold and black in accessories.

When it comes to renovating a bathroom you have two options. Opt for timeless designs, those that you know will not go out of style and that can accompany you for a long time, or take risks and enjoy the design that you most want.

The creativity When choosing materials and colors in the bathroom, it is one of the most viewed trends in this latest edition of Casa Decor 2022 and it is what Ana Lorenzana de Decoryver has put into practice in one of her latest renovations.

A clean reform, one of those that does not raise dust because there is no demolition of tiles but instead the change is produced with vinyl and paint on the existing porcelain.

Index hide
1 The bathroom before
2 the bathroom now
3 It has inspired us:

The bathroom before the reform stood out for the beige / taupe color of both the walls and the toilets, as well as for a completely outdated set of sink and mirror.

What stands out most in the bathroom now is its large plant-print shower Ana confirms that it is an adhesive vinyl suitable for wet areas with an ivy print, chosen for the shower walls.

For the walls of the rest of the bathroom tile paint was chosen in an old white shade (white with a tendency to gray) so that it had the same tone as that of the shower vinyl.

The floor was also covered with a finishing vinyl very light wood to give warmth to the bathroom.

According to the designer, initially the idea was to combine faucets and screens in gold but in the end they opted for black, leaving gold only for some details such as the sink faucet, the mirror, and the hanging lamp. This mix brings brightness and strength to the bathroom that is offset by the warmth of the wood of the large sink cabinet, which now occupies the space of the sink and the old bidet (a piece that has been removed). Although this space has also been used to include a practical tall cabinet with which to provide extra storage to the bathroom.

Read:  discover this selection of curtain rods for the shower or bathtub that do not require screws or drilling the wall

The hanging lamp that accompanies the mirror is one more touch of trend that is now included in the bathroom where it was respected the plaster molding over the sink to be able to install a led strip.

Images and thanks to Decoryver

Round gold mirror 70 cm in diameter by Koonmi available on Amazon for 77.28 euros

Retro pendant lamp in gold from Eglo Carlton via Amazon for 49.99 euros

Black corner shower shelves that can be installed without drilling. Two units for 21.99 euros

Ikea launches an augmented reality application that recreates your house, empties it, and allows you to redecorate it with its furniture

My bathtub is full of limescale and has yellowish stains. What can I do to clean it effortlessly?

The barely 50 m2 of this apartment in Terrassa, Barcelona, ​​give to enjoy all the comforts as well as to expose the great collection...

Gain privacy and protect yourself from the wind with these balcony and terrace protectors from Ikea, Lidl and Maisons du Monde

This prefabricated house has a loft-like design, makes the most of the space, and costs 63,000 euros

Christian Bale would return as Batman

Sonic Origins – Is it worth it or is it better to let it go? |

‘Dark’ and ‘Stranger Things’ have more in common than you think