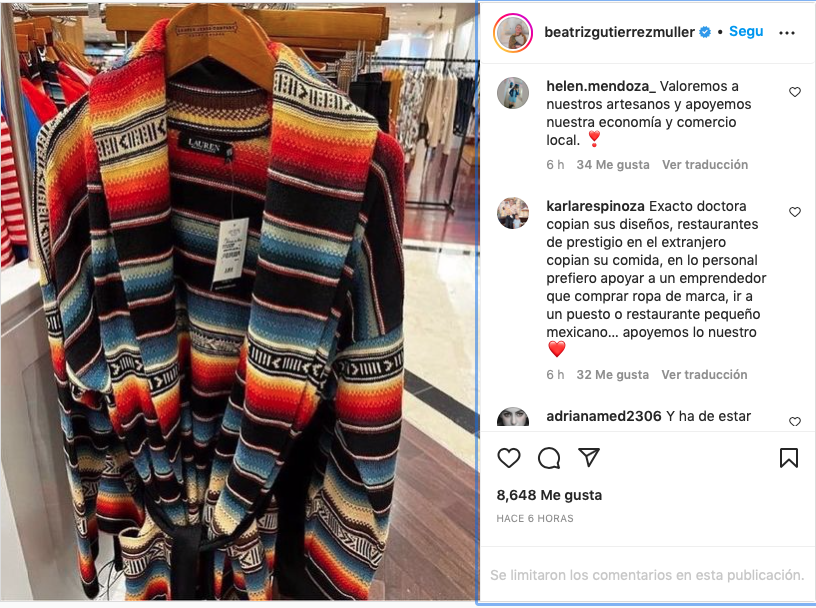 In an increasingly digitized world, it is normal for various complaints to arise from people through this medium. As an example recently, First Lady Beatriz Gutiérrez Müller went to her Instagram account to accuse and denounce the luxury brand Ralph Lauren for allegedly plagiarizing textile designs from communities originating in Mexico and using them in their garments.

Currently, many brands have been accused of cultural appropriation, but many people are still unaware of the meaning of this term.

According to the Cambridge Dictionarycultural appropriation is “the act of taking or using things from a culture that is not your own, especially without showing that you understand or respect this culture”.

Once again, the wife of President Andrés Manuel Lopéz Obrador, is once again in controversy, after publishing through her social networks a forceful complaint against the luxury brand Ralph Lauren, for allegedly plagiarizing textile designs from communities originating in Mexico.

Through her account on the social network Instagram, the academic shared a clear message, where she called on the famous designer to recognize that one of the garments of his brand, which is currently for sale in Mexican shopping centers, was plagiarized from the country’s textile designs.

“Hey Ralph: we already realized that you really like Mexican designs, especially those that make ancestral cultures that preserve the textile tradition,” wrote Beatriz Gutiérrez Müller on her official Instagram account, where she has more than 300 thousand followers.

Likewise, in her publication, the writer also shared a photo of what appears to be a knitted sweater with the colors yellow, blue, orange, white and black, which, between stripes and patterns, evokes the original designs of communities such as Contla in Tlaxcala and of Saltillo in Coahuila.

But in her post, the first lady also reminded the designer that what he is doing is considered plagiarism, calling it immoral.

The controversial luxury garment is no longer available on the web portal of the well-known fashion brand, but on e-commerce sites such as Ebay or Mercado Libre it costs between 230 and 300 dollars, the equivalent of almost 5 thousand Mexican pesos.

The publication has generated so much controversy before the digital pulse, where Internet users commented that “it is necessary to vindicate the history of such an important state.”

“The funniest and even outrageous thing is that the “whitexicans” see this garment in a market in the towns where they are manufactured and it seems “cheap”, oh but they see the same one with the Ralph Lauren logo and it seems “DI-VI- NO!!””” Hahahaha they are a cartoon!” says one of the comments.

“Let’s value our artisans and support our local economy and commerce,” read another comment.

“Exactly doctor they copy their designs, prestigious restaurants abroad copy their food, personally I prefer to support an entrepreneur than buy branded clothes, go to a stall or small Mexican restaurant… let’s support ours,” wrote another Internet user.

Let us remember that this would not be the first time that a luxury brand is accused by some Mexican figure of plagiarism or cultural appropriation, where the National Institute of Indigenous Peoples (INPI) has completely condemned the plagiarism of the textile designs of communities indigenous rights that some brands have incurred.

As an example, in 2021 when the company Anthropologie, based in the United States, plagiarized the design of clothing originating in Oaxaca, for which the authorities of Santa María Tlahuitoltepec, Mixe municipality, made a public complaint about the fact and the INPI failed. the action.

In conclusion, there will be more and more cases of cultural appropriation, which many describe as disrespectful use of traditions and cultural manifestations, since we live in an increasingly globalized world.

Will Beatriz Gutiérrez Müller promote branding of AMLO and the Presidency? This is how other first ladies have done it